The Wider Effects of the Syrian Crisis 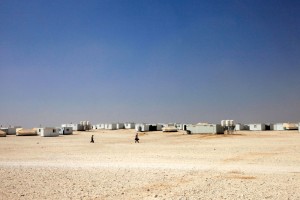 International news is dominated by talk of diplomatic resolutions over chemical weapons.  Disarmament whilst the conflict rages on seems near to impossible, even if Bashar al-Assad fully complies with the deal.

The conflict has irrevocably damaged Syria already.  It has cost the local oil industry $2.9 billion dollars already if not more, by damaging electricity grids and other core infrastructure.  The continued bombing, along with US and EU sanctions, has crippled the country. Although Syria was one of the largest energy producers before March 2011, its precarious situation will now affect oil markets across the world, since major oil-producing countries like Saudi Arabia, Iran and Russia all have huge stakes in the civil war.

The wider effects of the conflict do not solely rest on oil, however. The waves of fleeing refugees combined with ongoing local violence threatens the security and prosperity of Syria’s neighbours.

“Lebanon needs three things, security, stability and development”, according to the Deputy-Secretary General of Hezbollah.  Ongoing civil war in a neighbouring country does not provide any of them.  The “chemical settlement” currently being negotiated between John Kerry and his Russian counterpart Sergei Lavrov is viewed with scepticism in the Lebanese press.  Lebanon produced a declaration at the UN Security Council in 2012 specifically to avoid regional conflicts, stating that:

“Lebanon should eschew block politics and regional and international conflicts.  It should seek to avoid the negative repercussions of regional tensions and crises in order to preserve its own paramount interest, national unity and civil peace…”

There is no better example than the Syrian conflict.  This declaration acknowledges the difficulties that arise from sectarian violence, and the mess that can be unleashed by outside involvement. Despite its explicit wish not to get involved, sharing a border with Syria means that 63,000 refugees from Syria have entered the country since the beginning of the crisis.  Over 100 Syrian refugees were reported by the UN Refugee Agency (UNHCR) to have been relocated on a “temporary basis” to Germany.  Refugee havens far from the conflict may be the only way to relieve Syria’s neighbours of the burden of refugee assistance, and may become more necessary as fighting continues.

Jordan is accustomed to welcoming refugees; it is home to the second largest refugee camp in the world, Zaatari.   In January 2013, the number of Syrian refugees in Jordan was 250,000, predicted to increase to 432,500 by December.  As a country that has not seen major regime change from the Arab Spring, Jordan’s Hashemite monarchy will be under particular pressure to provide better conditions for its own citizens as well as to support the incoming refugees.  Jordan is firmly against military intervention by Western countries in Syria. King Abdullah II was reported as emphasising the “firm and strong links”Jordan has with China during this period of “regional and international challenges”; a clear move to ally himself with another proponent of non-intervention.  He wants to avert military attacks in Syria to avoid worsening the situation, as well as Jordan’s refugee problem.

It may take decades, even generations, for displaced people to make it back to their country of origin. The UN announced that remaining Iranian exiles and MEK members (a group who fought with Saddam Hussein) in a high-security camp will soon be resettled abroad. This is proof of just how complicated a refugee’s status can be years after conflict has “ended”, especially in a country hostile to their continued presence. The Kurdistan region in Iraq has received large numbers of the refugees fleeing Syria, and many come from the Syrian Kurdish population.  The Kurdistan Regional Government (KRG) has pledged its support to help.  It has asked oil companies working in the region for $50 million, and pledged to match their contributions dollar for dollar.  Time will tell whether the KRG and the Iraqi central government will manage to cope with the influx, given the ongoing violence and instability in the country.

Turkey is the only Syrian neighbour to welcome US-led strikes against Bashar al-Assad.  In fact, the government in Ankara can scarcely hide its annoyance at the current delay, and has said that it wants the US to prepare “Plan B”.  President Erdogan has no doubts that the Syrian government used chemical weapons and thinks that it will continue to perpetrate similar atrocities if the West do not act.  Thousands of civilians are being killed by conventional weapons and something must be done to intervene and stop the killing. This stance is more bullish than the United States and France, who do not seem to want to intervene and have cautiously welcomed Putin’s plan for disarmament.

Turkey maintains a “geographical limitation” under Article 1 (B) of the 1951 Refugee Convention, which means that it is not obligated to accept refugees from outside Europe.  Therefore, the 500,000 Syrians predicted for 2013 are only allowed to stay until UNHCR can place them elsewhere.

All news in Syria’s neighbouring countries points to a huge refugee crisis stemming from the conflict, as well as violence and instability.  The surrounding countries do not want to get involved and jeopardise their own security.  Turkey is the exception; it sees involvement in military action as the only way to bring an end to the conflict and to defeat Assad.  During the next few weeks or months the world will focus on the chemical disarmament process and its success or failure, but the refugee tides will surely continue.  Solutions must be found to this problem and to the maintenance of regional stability, as the effects of the Syrian conflict continue to push the region towards chaos.