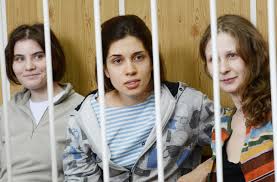 Following their infamous performance outside Moscow’s Cathedral of Christ the Saviour on February 21st 2012, the song ‘Punk Prayer: Mother of God Drive Putin Away’ quickly went viral. It goes without saying that the feminist punk rock band based in Moscow has made quite a stir around the world. Between their brightly coloured balaclavas and their risque guerrilla performances in unexpected places, Pussy Riot is anything but your average punk rock band. With their music centering on provocative themes such as feminism, LGBT rights, opposition to Putin’s policies and the relationship between the church and state in Russia, the group has become somewhat of a beacon of hope in changing the poor state of human rights in the country. Now with two of their members, Nadezhda Tolokonnikova and Maria Alyokhina, currently imprisoned for hooliganism following their sentencing earlier this year in August, it can be questioned whether Pussy Riot will be able to make a lasting impression on the Russian people and force through the much needed change regarding human rights.

As religion plays a prominent role in both the public and private life of Russia today, it is unsurprising that the majority of Russians have been unsympathetic to the Pussy Riot’s cause. Last year, a poll conducted by Levada-Center showed that 47% of the people polled agreed with the statement that the group ‘grossly violated the norms of public morality’ and 50% that the Russian church should play a role in the public life to ‘maintain public morality’. The deep controversial nature of the lyrics of the Punk Prayer focused on the issue of the close relationship between the Orthodox Church and the corrupted political elite. With the head of the Orthodox Church, Patriarch Kirill calling Putin’s rule as a ‘miracle of God’ and becoming the official religious consultant to Kremlin earlier last year, it is evidence in point of the scarce to none separation between the state and church. Yet, many in Russia saw the protest as an attack on the Orthodox faith and its followers. All which suggests that although Pussy Riot got the ball moving, it is going to take a lot more than just one band to shake up Russia’s draconian stance on human rights.

Although after the breakup of the Soviet Union in 1991, there was for a moment a shred of optimism and hope for the future of women’s rights (and human rights more generally. Following the collapse of the USSR, there was a flood of foreign aid and help sent to help rebuild civil society in Russia and the create the foundations for a democracy, potentially. This led to a flourishment of women’s organizations in the country; networks centred on resolving domestic violence, protecting women and giving them a voice were developed. Russia even became signatory to various human right treaties, including the Universal Declaration of Human Rights, as well as ratifying others like the International Covenant on Civil and Political Rights, International Covenant on Economic, Social and Cultural Rights and the European Convention of Human Rights. However, under Putin all this turned to shambles.

Perhaps, the most recent example of this lack of respect towards human rights in Russia, follows the adoption of the ‘anti-gay laws’ by the Putin administration in June of this year. The law bans circulation of publications and information, which promotes non-traditional sexual relationships or the idea that both straight and homosexual relationships are on par, socially.  Amnesty International has criticized Putin’s anti-gay propaganda law as an, ‘assault on the freedom of speech’. And what about the various obstacles disabled people must suffer through in Russia? Though much has been done in preparation for the Winter Paralympics in Sochi, Russia, March 2014, out of the public eye many people still struggle to use public transportation or to even leave their homes. This in turn greatly impedes their ability to have a normal life, to get a job or have an education. Not to mention, during the past 12 years of Putin’s power hold over Russia he has limited the freedom of assembly, introduced a blasphemy law which criminalizes criticizing believers and religion, prosecuted the LGBT community as well broadened the definitions of treason and espionage, which may potentially lead to the criminalization of human rights activism in Russia; amongst many other things.

With Pussy Riot’s Tolokonnikova being moved to isolation on the 24th of September, 2013 following her letter to her husband, where she announced she’d be going on hunger strike following death threats from the administration at the Mordovia prison. It is unlikely that much will be heeded by the feminist punk rock band’s message that things need to desperately change in Russia. In the letter Tolokonnikova spoke about the inhumane conditions, with a 16 hour work day, the refusal by prison wardens to allow inmates to use the toilet, and the condonement of violence; just a few of things mentioned by the Pussy Riot member. So the question goes: will our Punk Prayer for human rights ever be answered in Russia?

The Wider Effects of the Syrian Crisis