Party Conferences: Is There a Point? 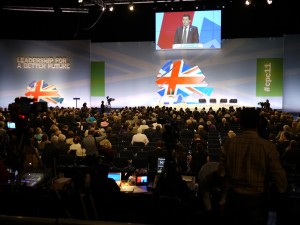 So conference season is upon us once again. A time when the main political parties in the UK try to convince us that they a) not only care about poor little old us and b) they are the only ones who can solve this country’s problems because the others are rubbish. Invariably there is little new in these events. Either the leader is under threat of a revolt or the party is surging on their way to victory.
One of the problems I have with conferences is that I find it increasingly difficult to distinguish between the parties. They like to boast how different they truly are, but I get the sense (and maybe you do too) that which ever group is in power they would do exactly the same as the others when it came down to it. In part because that is what modern democracy is. It is a horridly squishy thing where ‘extremes’ of opinion get bartered down until a compromise is reached. One which often is far from the original idea first spouted with such bravado. At least this is where the idea from Labour for a cap on energy bills stands out. It actually creates a difference in the parties. I’m not sure it will ever happen, for a number of reasons, but it is a statement of intent.
Another concern for me is that when I listen to the leaders I actually like all of them in a way. They all have their merits. Indeed if we are to be honest we probably could see them all in government. They are articulate and capable, which does beg the question why don’t they work together? They all buzz around the middle ground so they should be able to get along. But that isn’t where the power lies in parties: it is at the extremes. Whether it is the tag ‘em and flog ‘em element of the Tories, or the tax ‘em and bash ‘em union wing (I think the extreme elements of the Lib Dems are just high!).
Wave after wave of people stand up to applaud the leader for their fantastic speech. Gone are the days of the grandstanding arguments (particularly within Labour) because they make parties seem disunited. So the question is: what are conferences for anymore? Clearly they help bond people together on a party level. They allow people to network, drink and have interesting stories to tell in their memoirs. But for the viewer, for that person who has worked all day and has 3 hours at home before they head off to bed, I think they mean very little. People are distrusting enough of the body politic, but honestly very few people are going to choose to watch conference highlights over a good comedy show or their favourite soap opera. So they rely on the media, particularly the news elements to tell them if it was a good speech. And if we’re honest very few leaders give bad speeches, it is there job. The most car crashing one I have seen in my memory was Iain Duncan Smith’s ‘quiet man’. I recall watching Tony Blair, one of the best orators in modern politics giving his speech as party leader. He was always enthralling and I used to think ‘wow he will make a great, inspirational Prime Minister one day’ and then realising that he had been Prime Minister for 5, 6, 7 years and the country was still in a bit of a state!
Conferences can make or break careers. They certainly helped put William Hague on the map and as we have seen with Godfrey Bloom, they can end them pretty quickly too. I have to say though I am getting a bit tired of this faux outrage that happens in politics. Where people who aren’t in the room run around every media outlet they can find to demand the resignation of this person or that person because of comments taken out of context or simply ones that can be brushed off. I rarely agree with things that many people (certain comedians or rappers for example) say, but if an audience member has chosen to hear someone speak and has no problem with what is said, then why the outrage? Now if someone in the room protested (and I haven’t heard of anyone) then so be it.
So next week will be the turn of the Conservatives. David Cameron will no doubt look very presidential and tell us that the pain we have been suffering has all been worthwhile. People will nod and applaud in the room, whilst the rest of us get on with our lives.