Australia Gets Cruel On Refugees 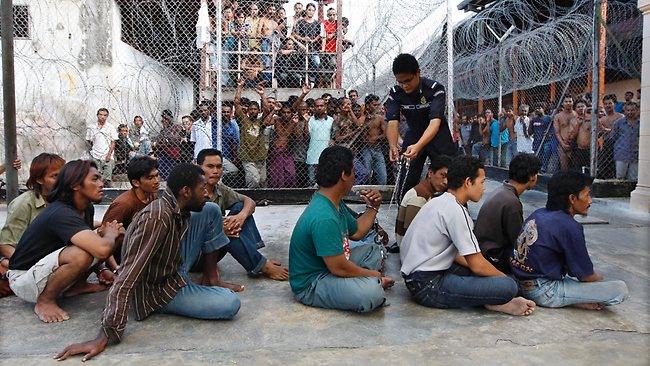 Australia’s geography makes it a prime destination for asylum seekers to reach by boat from south Asia, Indonesia and the Pacific and even conflict-torn places further afield. Indeed, a fair number of the one million refugees who have left Syria have sought safety in the hostile country that is Australia.

Unfortunately for these asylum seekers, there is a political consensus in Australia in favour of a shocking dereliction of the nation’s ethical duties. Fears of the population being swelled by millions of the world’s most desperate people have prompted draconian measures by the Australian authorities, some of which stretch the limits of legality. Unfortunately, this looks set to only get worse under the new Liberal-National Coalition government, which has made a hardline approach to asylum seekers a signature policy commitment.

The latest human consequence of this unspoken consensus is alleged to be the deaths of 70 Syrian refugees, who contacted an Australian embassy for help as their boat sank in the sea between Java and Australia. They had attempted to reach Indonesia first. According to survivors, the embassy had promised to rescue the passengers within two hours, but no help was provided for over 24 hours. No official explanation has been provided for the delay, but it appears that Indonesian authorities, who were responsible for sea rescues in that area, were not alerted until several hours after Australian officials were contacted.

Many observers suspect that this is not unrelated to a culture in Australian border authorities in which they are instructed to tow boats full of refugees back to their country of departure without even assessing asylum claims. An atmosphere in which any ‘accepted’ refugees are sent to offshore ‘processing centres’ (a somewhat Orwellian term) where their rights are so limited that they can only make a one-minute phone call every week. An atmosphere in which refugees are simply dumped in poverty-stricken Papua New Guinea rather than allowed to settle on Australian soil.

There is nothing in Australia’s attitude to asylum seekers that treats them in any way like human beings entitled to even a vestige of respect. They are treated much as the rest of us would treat moths: irritating pests that we have to protect ourselves from. Even where one accepts the argument that Australia simply cannot accommodate the sheer number of deserving asylum seekers that would journey to the country if they ‘went soft’ on refugees, there is no justification for towing women and children back to regions where they would be under threat, or for ignoring a distress call from a boat full of drowning people.

A more constructive policy would be to assess every asylum claim; return all unjustified claimants, but safely; assist low priority cases in resettling elsewhere (in a few cases cases, even different regions of their home country will be safe); and reserve accommodation in Australian territory for the most vulnerable of refugees. At least in that eventuality, Australia could not be reasonable accused of being unfair.