Riot from Wrong presented by the Spitz and Fully Focused: 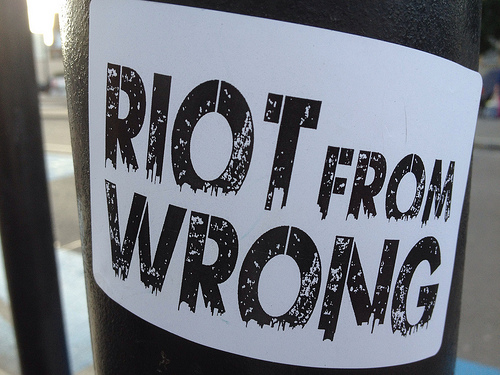 The opportunity to watch this movie brought me face to face with the reality of event that led to the wanton destruction of property in the UK in August 2011. I was out of the country and could not get enough details from the news and have not had the opportunity of knowing details of the proximate course of the riot.

The 14 passionate young people from across London who took the initiative to go round with camera interviewing people in London, Manchester, Liverpool and Birmingham and recording the riot need to be applauded. The movie highlights a lot that if taken into account would prevent similar riot in future.

At the commencement of the movie a rifle spoke and a man dies. Answers were demanded from the Police on what happened and why. This was peaceful until the police pinned a girl to the ground. According to the movie this was what brought about a chain of events leading to the riot. John Kerry the US Secretary of State while addressing the APEC on Monday 7 October 2013 said that the world has become small through twitter. Almost everyone has a mobile phone with camera and twitter account and in a millilitre of a second word can reach millions of people.

Words and pictures went out, there and then riot began. From the movie one could see that the anger of the rioters was not only as a result of the rifle that spoke and Mark Duggan died but on issues they had borne in mind against the police and the government. Miscreants took advantage of the riot to rampage and plunder. This action did not just end in Tottenham where the incident took place but spread to other major cities in the country. It is said that when a pot boils strongly the only remedy is to withdraw the fire.
Many of the people interviewed during the making of the movie who also featured in the movie seemed to have expressed the same opinion that the government should change tactic in dealing with youth unemployment and other social amenities that affect the youths. The question still remains, what hope is there for the future?

In my opinion the lessons to be learned from this is that the world is evolving and system of communication is also evolving. Bearing this in mind it is my candid opinion that the system of policing has to change with time. If at the time the demonstrators went to the police demanding answers to their queries that the police sent out a senior officer or even any other rank to kindly say to them; ‘please be patient, we will come back to you with answers in a short while’ or if they had answers to their queries, not to give the answers immediately but first diffuse the tension by using kind words, this riot would have been prevented. The word ‘sorry’ is just five letters but will do magic to any tense situation. It would not make the police weak but will rather calm a tense situation. A clear example of this could be seen in the movie when the Mayor of London Boris Johnson stepped in and the crowd was ready to join him in cleaning up. The people of the world deserve soft approach to solving problems. Any show of force could be met with a similar and there will be chaos.

From the movie the police seemed to have had a preconceived notion of those who came demanding answers to their question. If the police will adopt an attitude of keeping an open mind in any given situation they will have a better chance of solving a crime. There is honour in peaceful resolution of conflict.

This movie is a must see by everyone living in Britain. I commend those who produced the movie and in support of Michael Mansfield QC I recommend that this movie be shown on all UK television channels. I also observed during the Q & A session that the media’s style of publishing news at times fuels crisis than quench it, this has to change as well.

BY: Emmanuel Opiah writing in London

The (not very) international criminal court

The Daily Mail’s attack on Ed Miliband through his father’s ‘evil’ legacy – right or wrong?

The Daily Mail's attack on Ed Miliband through his father's 'evil' legacy - right or wrong?