What Do We Do About a Problem Like Golden Dawn? 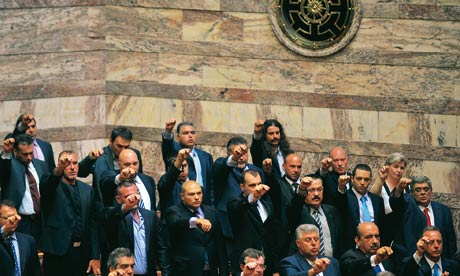 What does one do about a problem like Golden Dawn? The recent crackdown on Greece’s Golden Dawn party has been widely reported, though has failed to make waves in the British press. The crackdown has seen the arrest of several MPs including the party’s leader and his deputy and a rash of resignation from the organisation. What follows is a summary of events in the recent history of the movement that give some suggestion as to what success the crackdown will have in easing the concerns presented by this most unusual of political organisations.

Golden Dawn are Greece’s ultranationalist, black clad, far-right political organisation; and now appear to be in some sort of grey area between Parliamentary party and criminal organisation.

Not only does Golden Dawn hold a history of accusations of serious, politically motivated, violent crime against its membership -stretching back over the last two decades- but also a presence in the Greek parliament roughly proportionate to that which the Lib Dems posses at Westminster. Further complicating matters is the groups huge popularity within the police and armed forces, the widespread reportage of assistance provided to Golden Dawn by both of these limbs of the state and the somewhat unusual (though popular) community support initiatives that the organisation is operating in some of Greece’s most impoverished areas.

As recently as the 2009 Greek election the movement was fairing far worse than the BNP were in Britain, securing a measly 0.3% of the vote (a 6th of what Nick Griffin achieved in 2010). However in the chaotic election of May 2012 -after the country had been hit by rioting, high levels of homelessness and the withdrawal of a referendum on planned austerity measures – Golden Dawn came away with 7% of the vote; thus winning them under Greece’s proportional system 21 of the Parliament’s 300 seats. Furthermore the Greek newspaper To Vima calculated at the time that over half of the nation’s police officers had voted for the party.

This popularity perhaps goes some way to explaining the occurrence of one of the most surprising stories published about Golden Dawn. Just over a year ago the Guardian reported that the organisation has been ‘increasingly assuming the role of law enforcement officers on the streets of the bankrupt country’ whilst apparently having complainants, in matters involving immigrants, sent their way by the Greek police. It was soon after alleged that anti-fascist demonstrators, who clashed with Golden Dawn, had been detained by the police and suffered ‘Abu Ghraib’ style torture whilst in state custody.

Late last month two high-ranking police officers resigned following revelations of failure to issue orders for the arrest of members of the organisation involved in violence. The heads of special forces, firearms and explosives, a rapid response unit, and perhaps most tellingly, both organised crime and internal affairs have been shifted to other positions pending investigation. Similar concerns have arisen regarding assistance provided to the organisation by the Greek military. An inquiry has been launched, by the authorities, into allegations of providing training to hit squads established by Golden Dawn.

Perhaps most significant of all is the groups social outreach program. The right-wingers have consistently been providing aid, in the food, clothes and services, to residents of Greece’s most destitute areas. The cost of accepting Golden Dawn’s assistance is however an expectation of providing one’s loyalty in return.

As detailed above, the Golden Dawn has rapidly become a powerful magnet for the loyalty of the two groups most significant in a crisis – those who have nothing to loose but everything to gain, and those who have both the power and effective means to use force. It is surprising that the reaction to the sudden and significant crackdown on Golden Dawn has not been more pronounced. One fears this may be the calm before another of the terrible storms that have so blighted Greece’s recent history.