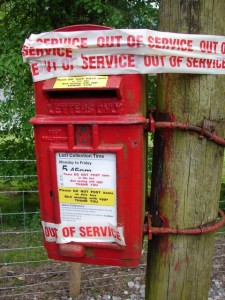 Plans to privatise the Royal Mail have been slowly speculating for years, but now it is actually happening – and it is happening fast. The biggest public self-off since the reign of Thatcher is now underway, with investors rushing in to order their shares in the 500-year-old company.

Privatising the Royal Mail has in fact been on the cards for years. The argument put forward by the government and Royal Mail management has always been that the company needs access to private capital for growth and competition. In 2011, the Postal Services Act allowed for up to 90% of the company to be privatised – based on the idea that majority shareholding will provide the company with the capital it needs to compete with private companies (such as amazon, TNT and UK Mail).

According to business secretary Vince Cable this is “consistent with developments elsewhere in Europe where privatised operators…produce profit margins far higher than the Royal Mail”. Of course this privatisation process has been met with strong opposition. Selling off the Royal Mail has always been controversial to say the least – something even Thatcher couldn’t bring herself to do when she sold off half of the UK!

Arguably its biggest opponent right now is the Communication Workers Union who have opposed the plans right from the onset.

Billy Hayes, the general secretary of CWU argues that Royal Mail “is flourishing in public ownership”, adding: “Poll after poll has shown public opposition to the sale, and with the company making substantial profits, there is no economic argument for the sale”. According to CWU – who represent the majority of Royal Mail employees -privatisation of the UK postal service is not in the interests of either workers or customers. They believe Royal Mail can be a successful business without privatisation and are full-heartedly campaigning to keep the UK postal service in the hands of the public.

The government on the other hand are ruthlessly rushing the sale before postal workers have a chance to say their bit and strike over the plan. CWU has been balloting thousands of its members on a national strike to fight against the privatisation and against changes in working conditions. However, the government have pulled a fast one– whilst CWU’s ballot is due to close on the 16th October; they have made sure that Royal Mail will be pretty much sold off by then! Institutional investors and members of the public were given the chance to apply for their shares in Royal Mail up until the 8th October. On October 11th, the company will be listed on the London stock exchange with an expected value of up to £3.3 billion. Then,  by the 15th, the majority of the company will most likely belong to big institutional investors; with a mere 10% stake being given to eligible UK-based Royal Mail employees and the little remaining being owned by individual public investors.

Yet although the government has sneakily pushed through with its plans, CWU still promises industrial action. The union maintains that regardless of who owns the company, they still have a battle to fight – a battle against retaining employee’s current job terms and conditions. They endeavour to fight for Royal Mail workers future employment prospects, pay and pensions if they can’t stop the privatisation from happening. These are workers who may be getting a stake in the company but, who also need wages rather than shares to pay their rent, bills and support their families!

Therefore the government is not out of the woods yet. CWU are still fighting, and hoping that the Labour Party’s support in opposition to the sale will “raise a warning flag for potential investors”.

The public are also consistently opposing. According to YouGov, public opinion polls reveal that two-thirds (67%) of the public are against the sale of Royal Mail! It is easy to see why the government is still pushing through with their plans however (they are set to rake in an estimated £2 billon from the sale of our national postal service). But, as the election looms and their party conferences are in full swing, surely it is public support rather that money they should be worrying about?