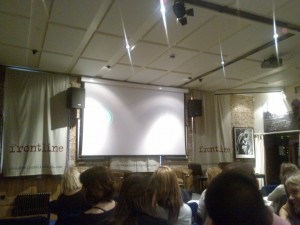 Industry peers and members of the Frontline Club gathered to hand out awards which recognise both emerging and well known names for outstanding work in; print, broadcast, and photojournalism. The judges were said to have based their decision on, “values of journalistic integrity, courage, and independent spirit”.

The awards were presented by Channel 4 presenter and journalist, Jon Snow.

The ceremony began with a video message from Guardian reporter, Glenn Greenwald and also featured a Keynote speech from former editor of The Sunday Times, Harold Evans. Evans gave a tribute to the people and journalists he found particularly inspiring. He also spoke about those that had lost their lives in he field and said: “honour them not by the words you choose, but with the deeds we do.”

The winner of the photojournalism award was Ali Ali, for documenting daily life in the Gaza strip. Jon Snow additionally congratulated Ali for his work, saying that work like Ali’s was the “building blocks of journalistic greatness”. He also continued to praise Ali and cite his belief that most people, “ignore what is going on in Gaza”. Patrick Kingsley won the award for print journalism for his in depth investigation titled: “Killing in Cairo: the full story of the Republicans Guards Club”.

The award for best broadcast journalism went to Ben Anderson for his piece on operators in the Helmand province of Afghanistan.

Jon Snow closed the evening with a quip about the Game of Thrones series and a rousing speech that celebrated the journalists that had congregated in the room. He said: “if we don’t celebrate what we regard as the best of the best, nobody else is going to do it for us”.

“We have the greatest trade on Earth, and we’re good at it!”

The Vatican fails to Exorcise its Past Demons

Saffron is a 20 year old Broadcast Journalism student living in Brighton. She loves to read and write and has a particular interest in womans rights and how they are portrayed and represented in the media. Her ideal job would be one that involves lots of travelling, writing, and reading.