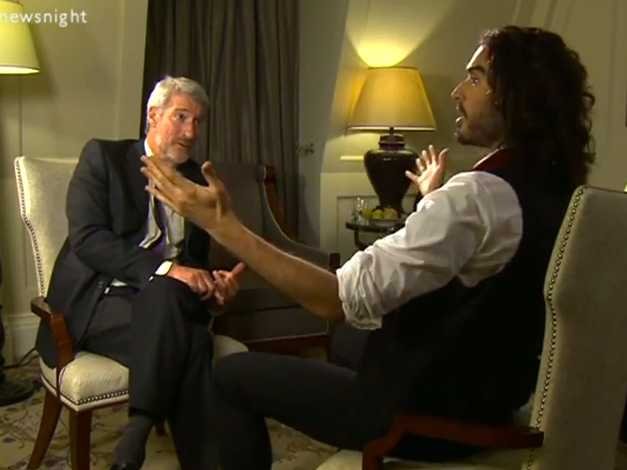 There are probably not many of us who haven’t seen (or heard about) Jeremy Paxman’s recent interview with Russell Brand.

Comedian. Actor. Libertine. Political Activist. And now apparently ‘guest editor’ of the New Statesman. Just to give you some facts and figures: over 10 million people watched his interview on the BBC’s Newsnight and a record 2.68 million unique users visited newstatesman.com during his stint as editor. Like him or not, it would be hard to describe Russell Brand as either ‘dishonest’ or  ‘false’. Indeed, it is arguably his sincerity that makes him such an attractive celebrity icon. And personal politics aside, it is clear that he has captured the public imagination in some form or another.

But we are not here to discuss the legitimacy or truth behind Russell Brand’s political beliefs. The reaction on the web and social media raises a rather significant question: can radical political change (or a ‘socialist revolution’ for example) be ignited or potentially organised through the internet and the use of social media? Have recent advances in technology really changed the political game?

On Facebook there is already a growing number of users calling for Russell Brand to be elected Prime Minister (or “chief admin bod” in his own words). This suggests, regardless of whether they are serious or not, that radical – one could almost say ‘revolutionary’ – political change is on a great many people’s minds. Moreover, Brand has over 7, 000, 000 followers on Twitter. To put that into perspective; Pope Francis has just over 3, 000, 000 and David Cameron sits on barely 500, 00o.

I spoke briefly to Professor Ian Grigg-Spall – a former lecturer at the University of Kent and currently the Academic Chair of the National Critical Lawyers’ Group – in search of answers. He said that the internet and electronic communication could obviously help “organise revolutionaries and transmit their message to the public”. He pointed to various cases of social media being used to help organise and support so-called ‘revolutionaries’ – the current political instability in Egypt being a prominent example. “Did Facebook and Twitter cause the [Egyptian] revolution? No. But these tools did speed up the process by helping to organize the revolutionaries, transmit their message to the world and galvanize international support”. Even the anti-austerity protests in the UK (most recently the ‘Bonfire of Austerity’ in Parliament Square) are largely organised and coordinated through the use of social media.

On a much darker note, Grigg-Spall did note that the internet can be “a double edged sword”. Why? Because the state can “take these tools away” – just as it did in Egypt by suspending Facebook and Twitter. “Revolutionaries cannot rely on the internet alone” he concluded.

Of course, this may scare some – or bring an inkling of hope to others – but Karl Marx continuously claimed that a socialist revolution could not be achieved until capitalism developed the ‘means of production’   to a certain point. In other words, capitalism was a kind of ‘necessary evil’ before the transition into socialism because it allowed technology to rapidly grow and advance. This would, as a consequence, make social and economic equality under socialism much more feasible. Furthermore, the concept of a global revolution (one of the main pillars of Marxism) becomes arguably more tangible in light of the internet.  We are all connected now and this opens up a new range of possibilities. Scared yet? Or maybe you’re just about to burst into the opening lyrics of “L’Internationale”?

Ultimately, Russell Brand is not afraid to speak his mind. I suppose he’s the epitome of political free speech. He is not afraid to say that our leaders have failed us. That western democracy has been replaced by a corporate plutocracy. That our very political system is both inherently flawed and completely indifferent to the suffering and struggles of normal people. That we can do better for our planet and it’s people – many of whom are desperately poor and miserable. Bottom line: capitalism – or perhaps ‘neoliberal capitalism’ for those who can’t bare to comprehend that the whole thing is ‘damaged goods’ – has failed and is currently propelling us to our own bloody destruction. According to Brand, the only thing that can stop our apparently apocalyptic future is revolution.

“Total revolution of consciousness and our entire social, political and economic system” writes Brand. “Is utopian revolution possible? The freethinking social architect Buckminster Fuller said humanity now faces a choice: oblivion or utopia”. I can’t help but be reminded by the old leftist slogan in that last sentence… Socialism or Barbarism?

What Is the Comprehensive Economic and Trade Agreement (CETA) Deal?

Do you Have a Right to feed yourself? Man in the USA Protests on being arrested for Fishing

Do you Have a Right to feed yourself? Man in the USA Protests on being arrested for Fishing