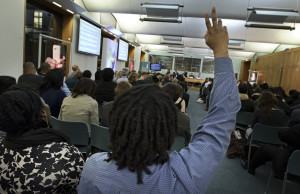 Students from schools, colleges and universities across London and the UK poured into Portcullis House last week to take part in this year’s Young People’s Question Time. The event, run by the Hansard Society [LINK: www.hansardsociety.org.uk] in collaboration with Parliament Week [LINK: www.parliamentweek.org], provides an opportunity for young people to engage directly with decision-makers at the heart of Westminster and speak out about their views towards the state of politics in Britain.

Chairing the debate for the third year in a row was Krishnan Guru-Murthy of Channel 4 News, who was joined on the panel by Labour MP Natascha Engel, the Conservative MP Nadhim Zahawi, Lib Dem MP Julian Huppert and the independent Peer Baroness Young.

The first question pointed to the lack of women in politics and asked what can be done to address this inequality. Julian Huppert raised the issue of all women short-lists as an example of a measure that shouldn’t be adopted: “Women should win selections (to stand for election) because they are the best person for the job, not the best woman for the job.” Baroness Young quickly responded by arguing that all-women short-lists “shouldn’t be equated with having to pick an inferior being”. She defended the mechanism as an important counterweight against what she referred to as “systemic barriers which prevent women from being selected in the first place”.

Natascha Engel, who was herself elected after an all-women selection process, insisted that more effort should be invested in giving young women the confidence to pursue careers in politics by connecting them with women role-models through initiatives at school. Nadhim Zahawi echoed the need for deeper change: “The work environment was designed by blokes,” he said. “We need to think how we redesign it,” he added, “so it works for women as well.”

However, Zahawi was less radical in his response to a question on whether the voting age should be lowered. “I don’t support it,” he said, “because I don’t think at 16 you are able to evaluate everything that government does and how it touches your life.” In response, Engel, a strong supporter of votes at 16, claimed that many people eligible to vote can’t make these decisions either. “What we’ve never advocated,” she argued, “is that you have to have some intelligence or wisdom test before you vote in a general election.” Huppert echoed this position, adding that extending the franchise would also result in greater focus on issues affecting young people.

A quick show of hands among the audience, however, found that they were split 50-50 on the question of lowering the voting age. Nonetheless, there was broad agreement that emphasis should instead be placed on political education in school.

The concerns raised by the audience about the need for better political education quickly turned into one concerning the growing apathy among many young voters. Picking up on a point from a question claiming this indifference is born out of a feeling that all politicians sound the same, Zahawi admitted that there may be some truth in this: “Young people think we’re all elite in this place,” he said, adding the tendency of politicians not to apologise as an example of this.

Baroness Young agreed: “We don’t have a very … attractive political culture. When you look at the way our politicians behave … there’s a very strong sense that this is sometimes only about performance.”

Engel suggested parliament could combat these perceptions by moving away from ideologically-based politics to issues-based politics. Zahawi pointed towards select committees as a possible starting-point: “If you look at the way committees behave, they do a pretty good job. The reports are very powerful and are taken very seriously by government. If we could make [select committees] more interesting, you might get a very different opinion of this place.”

The next topic to be discussed took its cue from the recent spate of cycling deaths and what should be done to make Britain’s roads safer for cyclists. Huppert, chair of the All Party Parliamentary Group for Cycling, urged authorities to invest in better cycling infrastructure, including segregated lanes for bicycles, slower speed limits and the introduction of cycling-awareness training for drivers of HGVs. Engel, who was knocked off her bike last year, agreed: “I can’t see anything other than [separate cycle routes] working,” she said.

Last on the agenda was prison reform after an audience member suggested that prisoners get an easy ride. Each of the panellists shared the alternative view that rehabilitation should be the focus of prison and not punishment. Huppert took this a step further by calling on short-term sentences to be scrapped altogether and replaced with new systems of restorative justice that encourage offenders to reflect on the impact of their crimes. “A lot of research suggests this reduces reoffending far more than prison,” Huppert stated. “And it costs less,” he added.