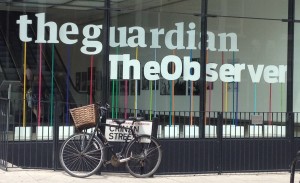 Former Foreign Secretary Jack Straw was also critical. He said that the Guardian was: “indulgent and irresponsible.” Astoundingly, he spoke of “avoiding [another] 7th July 2005”. This is staggering because the London bombings were the tragic outcome of decisions made by the government that Straw himself was such a prominent member of.

Chatham House (Britain’s premier foreign affairs institution) conducted an investigation into 7/7. It concluded that: “The UK is at particular risk [of terrorist attacks] because it is the closest ally of the United States, has deployed armed forces in the military campaigns to topple the Taliban regime in Afghanistan and in Iraq.” Blair and the rest of his government, rather ridiculously, tried to deny that their foreign policy had anything to do with 7/7. They said that the terrorists had struck because they “hate our freedoms.” That denial was made to look even more ridiculous when one of the captured 21/7 (the failed attack that took place two weeks after 7/7) attackers told authorities that his actions were directly inspired by UK foreign policy and military involvement in the Middle East.

7/7 and 21/7 are only two cases of many that starkly demonstrate how UK governments have put national security at risk. Since operations in Afghanistan began in 2001, the UK has been targeted many times: the 2006 transatlantic plot, the Haymarket bomb plot, Glasgow Airport and Exeter City Centre etc. More often than not, it was the perpetrators’ ineptitude rather than any thwarting by our intelligence agencies that saw relatively little harm done. By and large, these failed or ineffective attacks were low-tech and lacked sophistication (whilst still having the potential to be very lethal). This is important to note in the context of the Snowden/Guardian criticism – i.e. the terrorist threat to the UK is of a nature that lacks complexity and planning and therefore extremely difficult (if not impossible) for intelligence agencies to intercept.

In the case of the Guardian, there is no such tragic evidence like 7/7 to suggest they have put national security at risk. Of course, it is way too early to really tell. However, the Guardian, unlike the Labour government, did not take its decision in the certain knowledge that it would harm national security. It should also be noted that the paper has been extremely careful in what it has made public. Also, let us not forget the nature of the threat we outlined earlier: terrorist attacks that are low-tech and lacking sophistication – the kind of threat that intelligence agencies find near-impossible to intercept. Finally, we must also remember that the paper does have a fundamental journalistic responsibility to let the UK population know what the state is up to.

Despite being at significant risk from terror for more than a decade, we are fortunate that more blood hasn’t been shed. On the whole, this hasn’t been down to good intelligence but rather the very bad (or rather, lack of) intelligence of the perpetrators involved. Miraculously, they continue to botch their attempts to inflict harm upon us. We can count ourselves lucky but we must be aware that one day our good fortune may run out. We can’t count on sheer luck and ever less sophisticated terrorists indefinitely. Instead, we need tackle the roots of what threatens us; not give attention to things that are, at best, secondary such as the Guardian’s stories.