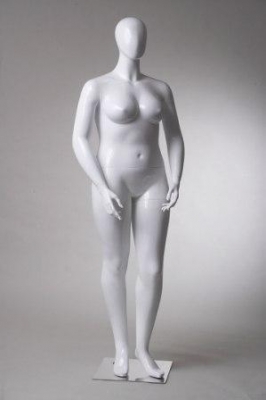 Debenhams are no strangers to challenging the norm when it comes to advertising their women’s clothing ranges in their stores. Instead of using familiar images of classically beautiful and unrealistically thin- women, the high street chain has decided to celebrate diversity. 2013 has been a year in which Debenhams led a revolution in fair representation of the female body. They were the first high street store to use disabled models, and its nationwide Summer 2013 campaign used an unusually varied range of models, including an amputee, a plus size model and a 69 year old, figures not often seen plastered on billboards and shop windows. Debenhams also recently banned the airbrushing of its lingerie models, a move that saved money and gained the company widespread respect.

The shop’s next step, however, appears to be the most controversial. This month Debenhams permanently introduced a UK first – size 16 in-store mannequins. These mannequins are the same size as the average woman in the UK, three sizes bigger than the usual size 10 mannequin that has been on the British high street for decades.

After a trial run three years ago, the mannequins are now being rolled out across all 170 Debenhams stores. The move will not only enhance the shopping experience –  now ‘average’ women can see how certain clothes will fit and hang on them, but will helpfully improve the current crisis revolving around how women have been represented in fashion and media over recent decades.

The fashion industry has always been at loggerheads at the idea of tummy rolls and bingo wings, with designer moguls like Karl Lagerfeld claiming that “no-one wants to see curvy women on the runway”, and images of frighteningly thin models appear all over fashion magazines and adverts. This has led to worrying trends such as the ‘thigh gap’ taking over teenager’s feeds on social media networks, and a huge increase in eating disorders among young adults. According to research by the Body Gossip campaign, one in ten young people will experience some form of eating disorder before the age of 25, and the numbers are growing.

This environment has led to women welcoming the introduction of the size 16 mannequins in one of the UKs biggest stores as a refreshing change, and has been backed by Women and Equalities minister Jo Swinson. The Liberal Democrat MP is currently leading a government initiative to increase body confidence in young women. Swinson said at the launch of the mannequins that current beauty standards told women that there was “only one way of being beautiful”. The MP also highlighted the business benefits of representing realistic and diverse female bodies:  “Recent research found that women are three times more likely to buy clothes when the fashion models are their size, so I hope more retailers will recognise that meeting customer demand for more diversity makes good business sense.”

However, the mannequins have also managed to cause a stir. The mannequins are meant to represent the average British woman, who is 5ft 3in, 11 stone and a size 16. However, this is officially overweight according to the BMI index, and could lead to a whole range of health and heart problems. Despite reflecting a more realistic representation of women, the mannequins may also be promoting an unhealthy standard. On the other hand, some argue that the mannequins don’t go far enough. Harriet Walker, writing for The Guardian, criticised the dummies for still promoting an unrealistic and airbrushed body standard for women, as the size 16 mannequins still have suspiciously flat stomachs and toned thighs, ‘they’re still weirdly super-human’. Liz Jones in the Daily Mail also made a similar point about the lean mannequins, writing ‘If you want to see the typical British woman, look at contestants Hannah Barrett and Sam Bailey on The X Factor. Nicely rounded, with lumps and bumps and big smiles — this is what women look like!’

Despite the increasing average size of the UKs female population going from a 12 to a 16 in just under a decade, many high street stores seem reluctant to supply increasing demand or even embracing the bodies of the majority of their customers. Size 16 is often the largest size (often listed as ‘XXL’) that shops provide, including high street sensation Top Shop, who has faced controversy this year by featuring size zero models on its website and stocking clothes designed by Kate Moss, who famously coined the mantra ‘nothing tastes as good as skinny feels’, now used in countless pro-anorexia sites. Debenham’s mannequins may be controversial, but they are important, and represent a shift in attitudes by retailers towards a more positive view of their female customers.

Alex has many years’ experience in writing on the topics of health and current affairs. In her spare time she teaches herself German and reads classic novels.