The Folly of the ‘Small Army’ Brigade. Should we retain a large Military? 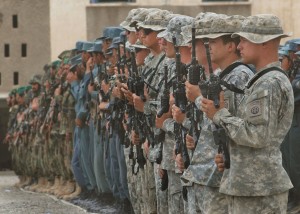 There is growing a school of thought in this country, from left-wing anti-imperialists, like Respect MP George Galloway, to small government conservatives, like Guardian columnist Sir Simon Jenkins, that what the military needs is massive pruning or even elimination. Those on the Left say that the military is only used for aggressive imperialism while those on the Right oppose the cost as well as advocating non interventionism, because they feel the military should only be used when there is a clear threat to Britain’s security- like there was in World War Two.

Now, I too advocate a non-interventionist foreign policy, whereby we trade with and are friends with countries but we don’t drop bombs on them in order to tell them how to live. I also think the defence budget must face some cuts and the elimination of unnecessary programmes, as the nation’s finances are in a bad state and so all parts of the state must do their bit. However I still think we must retain an army of at least 150,000 soldiers, an air force with the capability to undertake foreign wars and a substantial navy.

The first reason why we must retain a military is in order to guard against the rise of a new threat similar to that of Nazi Germany. Now you may think this is a preposterous idea, but few people in the 1920s and 1930s foresaw the future. If we see the Wall Street Crash of 1929 and the collapse of Lehman Brothers as in some ways analogous, then we see how it can take more than a decade for the effects to fully be felt. Who is to say that we may one day not have to fight another land war on the European continent against an aggressive power similar to Nazi Germany? When the Nazi threat did emerge we were not able to face it immediately due to defence cuts, and had to undertake a humiliating retreat at Dunkirk.

Secondly, we need a military that can respond to natural disasters in the world such as the recent typhoon in the Philippines. We cannot afford to retreat into isolationism. As world citizens we owe it to those less well-off than us to assist in times of need. We have a duty to help deliver aid and the military is the best way of doing this. It would be selfish to wash our hands of this. The military is also the best force to be able respond to natural disasters at home, flooding for example, due to their level of training and equipment such as helicopters that can be used to rescue people. The fire service alone cannot deal with large-scale incidents such as the flooding of 2007.

Thirdly, there are threats to British interests that only the military can respond to. A good example of this is the need to evacuate British citizens from Lebanon in 2006 during the war between Israel and Hezbollah. The Royal Navy was the only force with the capability to get people out. If we had followed the advice of Simon Jenkins and completely eliminated the military, would those people not have been trapped as Israeli bombs rained down on Beirut? Another good example of this is the Navy’s operations against piracy in Africa. These groups pose a threat to global commercial interests as well undertaking kidnappings, and so the Navy are the only force able to respond to this.

Anyway, the military budget is not that much out of total government spending. In 2012 we spent £46 billion on defence out of a total government budget of £550 billion. It is a folly to think we can have all kinds of goodies at home simply by eliminating defence, as the money simply wouldn’t be there. As mentioned above I do of course support some cuts in defence, but not a massive pruning or elimination.

The Paypal 14 are back in court

The Paypal 14 are back in court