Slavery – a present day issue or a forgotten problem? 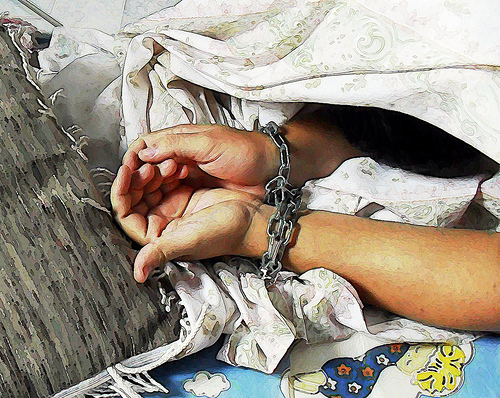 When most people think of slavery they associate the idea with the Transatlantic slave trade dating back to the 16th century, where the western powers abducted African people from their homelands, bought them across the Middle Passage and barbarically enslaved them for many years. There are not many who will dispute this as a disgusting incident of history. However, perhaps this is the problem, its clear association with history. Although the slave trade and slavery itself was rightfully abolished many years ago, it seems that slavery has not completely disappeared and is still a problem being battled with today on our very doorstep.

In recent news there have been widespread reports across the papers detailing that three women have been rescued from 30 years of domestic servitude, or to put it more bluntly, slavery, from a house in Lambeth, South London. The trio’s identities have been withheld, but so far have been identified as one Malaysian woman aged 69, one Irish woman aged 57 and a British woman aged 30, who is believed to have been held in slavery from a very young age.[1] Two people have been arrested; both aged 67 and are believe to be married.[2]

It comes of no surprise to me, as it probably does it you, that this story has been shocking to the British public and politicians alike and has seen Home Secretary Theresa May make tackling the case a ‘personal priority’ and David Cameron declaring the case as ‘utterly appalling’.[3] Such as story for me bought flashbacks of the cases of the American abductions of the three women in Ohio in 2002 and 2004 at the hands Ariel Castro and made me begin to question what this recent story really tells us. The police reported that although they had they had seen cases being delayed for up to 10 years, nothing of this scale and ‘magnitude’ had been seen before.[4] But my question is, why does shock within the police lie within the timescale in which the women were enslaved, rather than the fact they were enslaved in the first place? Does more need to be done to openly address the problem of modern day slavery within Britain and across the globe?

It seems this is a problem that has been identified internally by politicians, rather than something openly acknowledged as a problem to the public as something that needs to be improved upon and more aggressively addressed. Maybe this is due to the dark cloud that seems to overshadow everything in politics recently – the deficit, but I would argue not. This is a problem that seems to never have been properly addressed, and using the economic downturn just seems to give excuses for the governments of past and present to tackle this issue.

May, to her credit outlined proposals in the summer about this issue, that were backed by Labour, addressing the issue of slavery and human trafficking, but in light of this recent event, she has made an extended number of proposals, committing that the government will:

But why are these changes only being made now? After being asked to chair a review of this new anti-slavery legislation, Labour MP Frank Field has declared this recent case to potentially only be the ‘tip of the iceberg’ and from the figures, it seem Field is probably right.[6] Recent statistics estimate 4,700 people are being held in captivity and kept in slavery in Britain, with an alarming 400 cases reported in the past three months alone.[7] Reports show that the tragic cases of these people are often completely hidden from view and even more shockingly; many of these victims are children, with the Serious Organised Crime Agency (SOCA) identifying 2000 victims, with 25% of them being children.[8]

So what needs to be done? Does the western world need to recognise and more aggressively tackle the problem of slavery within our own country, which, from the figures, seems to be a big problem? If so, will May’s initiatives inspired by this shocking case be the answer?