I don’t agree with Nick Clegg, do you? 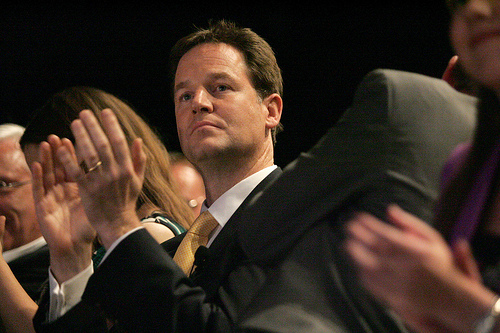 Nick Clegg was elected as leader of the Liberal Democrats because of his appearance. This was undoubtedly the case. In 2005, the Tories felt that the candidate who looked a bit like a young Tony Blair would repeat his electoral success, so the Lib Dems in turn felt that the candidate who looked a bit like David Cameron would help them compete with the Tories. This is how we have reached the stage whereby all three party leaders look the same, sound the same, say the same things, and have almost identical backgrounds and families. And the political class wonder why they are ignored by the public!  So Nick Clegg became leader without having to present any ideological programme. Which is good for him because he doesn’t have an agenda. He simply wants to further his own career. This is why he was able to bash the Tories in the 2010 election campaign, talking of riots if they introduced cuts in public spending, but then go into coalition with them a few weeks later.

Nick Clegg was accused of a “betrayal” by the chattering classes on the issue of student fees. But actually his behaviour on this issue showed his total lack of beliefs and principles. In my critique of Ed Miliband, I said that it is wrong of his opponents to assign an ideology to him as he has none. Well the same is true of Nick Clegg. He didn’t sign the pledge on fees because he felt it was the right thing to do, he signed the pledge as a cynical bid to win votes. He didn’t believe that it was a good policy or the right one for the country. His lack of ideology was shown by the fact he could happily discard it when it became politically necessary. His 2010 pledge not to increase VAT was a repeat performance of the fees debacle. He is someone who will say one thing to win votes, but then say another when he is in office, while believing in neither. These two policies demonstrate how, for Nick Clegg, the advancement of his own career is more important than standing up for something. He would rather ride in government limos and go to fancy dinners with Barack Obama and Angela Merkel than defend a belief system.

Now Nick Clegg claims to stand up for “social mobility” and helping everyone achieve their potential in life. It is an admirable aim and one which, like preventing grannies being mugged, everyone would claim was a good thing. But does he really believe it? Tony Blair claimed to believe in this as well, but has cynically used his own status to help his own children get ahead as adults. So it would be interesting to ask Nick Clegg whether his own children will benefit from having him as their father, as well as how he will make sure that they don’t. With Tony Blair we see that his apparent commitment to social mobility was only skin deep because of the help he has given his children. Will the Nick Clegg children benefit? I think I know what the answer is.

Now of course Nick Clegg is the leader of a party which has also never really believed in anything. Don’t get me wrong, the modern Labour and Tory parties are like the Marie Celeste: adrift.  They are bereft of a clear vision or grassroots support. However there was once a time when they did have ideological programmes and real roots in society. However, the Lib Dems have grown as a party from the top down. They are as much defined by negatives – what they are not – as what they are.  In Tory seats they are a left wing party which Labour voters can support, while in Labour areas, like Nick Clegg’s own Sheffield, the reverse is the case. We can see this in their highly successful “Labour/ the Tories can’t win here” leaflets. This means that in 2010 most of the votes cast for the party were votes against the other two parties as compared to votes for the Liberal Democrats. This means it is hardly surprising that they are led by a cynical, ideology-free career politician.

Confessions of a Reduced Aisle Junkie