Confessions of a Reduced Aisle Junkie 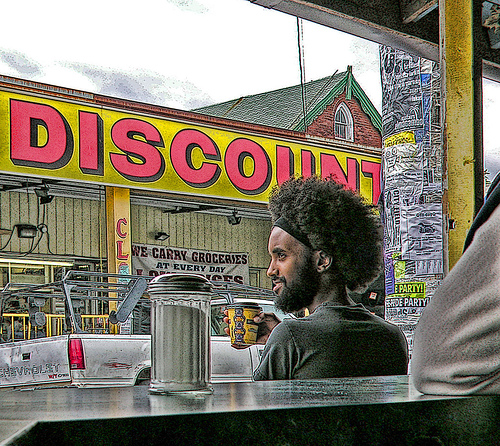 I’ve just come back from my latest hit. I can tell you it was a good one. There is a smile that beams across my face, even though it is bitterly cold outside. What is this secret? I have to say I have put off this moment for a while. Not because I am ashamed, but because I don’t want you to get involved and ruin my fun. For I, Ladies and Gentlemen, am a Reduced Aisle Junkie! Phew! It feels good to finally get it out in the open.

For those of you who aren’t aware of what one is, a Reduced Aisle Junkie is someone whose first thought when entering a supermarket is to head straight for the aisle that has the prices lowered on all the fresh goods that have to be sold by the end of that day. You can get some amazing bargains if you are a bit savvy about when you shop. It can be competitive. The women can get a bit vicious. Preying on my gentlemanly nature not to hit women, they deliberately park their trolleys in front of the rest of the shelves to block your access. They get their kids to huddle around so no one else can get to them. Men on the other hand will easily reach an arm over you if you are bending down and don’t mind an elbow in the head.

There are rules to the game though. And in these hard times fellow junkies are forgetting what they are. Firstly never take all the items off a shelf. I have seen people with shopping trolleys full of only reduced goods. One lady cleared out what must have been 10 cabbages in one go. That is not on! Don’t be greedy. It smacks of desperation and isn’t very British!
I must admit I have resulted to picking something up that I didn’t want just to ensure that some greedy woman didn’t get it. I walked around for a while before putting it back when they had left, ha! First person to touch the goods, controls them. Simple.

Never buy anything that is less than fifty percent reduced. I see people jumping in there at midday when only 20 pence is knocked off. That is too early, come back later for a better hit. A real bargain is a 30 pence pack of turkey, or even things that are knocked down to 5p! I once got a whole meal, starter, main and dessert for under a quid! I was in heaven. But the fix wasn’t enough. I was soon back amongst the aisles, searching, waiting for my next fix.

Never go shopping just for the bargains, because that is when there aren’t any! Go looking for it and the universe will know. Plan your day as I do to happen to be in the vicinity of the shop an hour or two before closing and then just casually pop in and go straight there. Note to other customers, if you’re not interested in the reduced stuff ensure that you keep all routes clear for those of us that head straight there!! You have to choose your shops. 24 hour stores are pretty useless at offering the best bargains. Go for the ones that close around 8ish.

Don’t abuse the staff. They must think we are savages, particularly as we might be taking their goodies that are left at the end of the day. The bakery goodies can be the best. Hovering waiting for the young girl to finish scanning. Taking them out of her hand, or worse handing her an item to reduce even further!

I am a junkie. I have even resulted in organising to go running in the evening just so that I can check out that aisle. Every new shop I go into I first recon to see where the goodies are at. I actually feel pain if I have to pay full price for a loaf of bread (why not when you can get the good stuff for 14p!). If I go without for a few days they I start to get sweaty palms. I can honestly say that in the last few months some of my best days have been topped off by getting a good bargain. Not fornication, nor sporting achievement but getting a 50p pack of meatballs! I have even spent a good hour just wandering around, going between the various sections (veg, meat and bakery) eyeing up the best deals and waiting for the prices to be dropped even further. Scouting for staff who maybe collecting more items to add to the pile.
At a previous shop I even identified my nemeses. The ones who would go shopping at the same time as me. I would get off the train from work and head straight to the shop and there I would see her. If she was already in position I would hustle my way in. If I was there first I would puff my chest up, stick my elbows and bottom out to make my presence felt so I could get first dibs. But times have changed. Budgets are tight. There was a time when no self-respecting grey haired hoity lady would dare be seen amongst the reduced section. But now they are all at it. Glaring and jostling. I swear one day someone is going to come a cropper whilst fighting it out for a reduced leg of lamb!

Like any addiction it creeps up on you. Firstly you just wander around and look pleased when you have grabbed a fine bap for just 10 pence at the end of the day. You are happy to get that 20p knocked off that packet of mince. But then it begins to take hold. You notice how others hang around the bakery section as the young girl tags the yellow stickers on the goodies (NB If you see a crowd of people stick around as something is coming and you don’t want to miss out). You wonder around picking up that full priced loaf and putting it back again. You notice she hasn’t finished so you go around and pick it up again. Still not done. You notice more crowds gathering. Your Britishness is telling you to walk on, you don’t really care about that pack of 5 luscious chocolate cookies just waiting there on the edge of the trolley. But then the crowd mentality kicks in. You don’t want to miss out and let these other people have all the fun. No. You want those gorgeous cookies. They have your name on it. The first time you might miss out, being left with the pecan plait instead of the cookies. But you learn your lesson. Get in position, hold your ground and let go of that reserved Englishness. You want those cookies! And so another addict is born.

I’m not sure how this will end. Will I spiral ever downwards into the abyss, only to be saved by an intervention, forcing me to buy full priced milk again?! Or will I keep going? Living with my addiction within the community, catching the eye of a fellow addict as we increase our speed to the reduced aisle.
I want those cookies!!!

I don’t agree with Nick Clegg, do you?

I don't agree with Nick Clegg, do you?