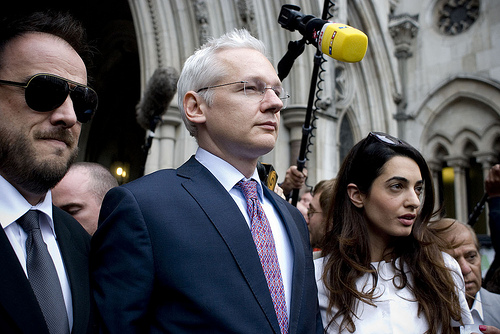 Over the last few weeks The Washington Post has been in contact with an anonymous official from the US Justice Department whom suggests that no case will be brought against Wikileaks founder Julian Assange. Yet despite these approaches Wikileaks officials and Julian Assange, whom remains holed up in the Equadorian embassy in London, have reacted sceptically to the comments made to the paper.

According to the anonymous source the Justice Department won’t bring charges against Julian Assange because that would mean having to prosecute US and UK newspapers as well, for publishing classified information. According to Sari Horowitz of the Washington Post this has been dubbed the ‘New York Times problem’, as the New York Times and Britain’s Guardian would also have to be charged.

Last week the post quoted US officials stating that there was no “sealed indictment” against Julian Assange, but admitted the investigation was ongoing and made no mention of whether a future indictment would be possible.

Neither statement was welcomed with any particular warmth by Wikileaks staff who pointed out that the completely anonymous statement could have been made by an official, for any motive. Furthermore that recent US policy towards Chelsea Manning and other leak cases showed little change in the USA’s aggressive policy towards those publishing sensitive information.

Furthermore Wikileaks pointed out, in regards the ‘New York Times problem’, that they had been investigated and attacked for the sourcing and process of gaining documents and information, not their publication. Therefore whilst other media outlets would be liable if Wikileaks were to be prosecuted for publishing documents, the actual intent and focus of the Justice Department has so far been on the process by which Wikileaks obtained documents.

A grand jury subpoena from the investigation shows that they have delved into whether Julian Assange and Wikileaks (and its supporters) violated the espionage act, committed fraud against the government, carried out computer fraud or theft and conversion of government documents. Only the Espionage Act of 1917 targets the publication of information, the rest concerning the collecting of information.

A clear problem emerging for US hopes of prosecution is the definition of what Wikileaks is; is it journalism? The Washington Post itself claims that Wikileaks ‘differs from journalism’, although does little to fully elaborate on how or why this is so. This question is vital to the investigations scope; because if they cannot prove that Wikileaks is not a journalistic organisation then a whole range of newspaper and media outlets will be liable to prosecution as well, making it unlikely any case would be brought against Wikileaks.

The strategic and political angle of the Wikileaks case has been fairly clear to most observers from the beginning, whether or not they support Wikileaks publication of documents. The swift condemnation of Wikileaks by international governments as varied as China, USA, Russia, Iraq, Afghanistan and others showed the fear generated in corridors of power around the world by the free flow of sensitive, sometimes extraordinary and usually embarrassing information. Furthermore the pressure put on organisations and companies used by Wikileaks, such as Paypal, Visa and Mastercard, shows the immense political unease at the existence of Wikileaks. It also reveals that neither charges nor official indictments are necessary for political pressure to be applied to Wikileaks; this in-itself should stand out as a vital lesson for media organisations reporting sensitive information, that there activities need not be declared illegal nor may there need any charges on the table for the US government to pressurise its operations.

The investigation into Wikileaks has historical precedence; Richard Nixon looked into prosecuting the New York Times for printing the ‘Pentagon Papers’ provided by Daniel Ellsberg, primarily related the Vietnam war. At the time Nixon also setup a grand jury which subpoenaed many journalists, anti-war organisation, leftist political organisations and academics whom had either received documents, or Nixon felt were involved or were in someway a threat to ‘National Security’. Again, as with the Wikileaks case the jury investigated how the documents were obtained.

The former New York Times legal counsel James Goodale has said that Obama is hoping to achieve what Nixon did not, by “news gathering entities in this country and reporters criminally liable for what they do when they gather the news. This would mean that the government will define the terms in which reporters and publishers can gather and publish the news, and we will lose that ability to do that ourselves or publishers will lose the ability to do that under the First Amendment.”

Therefore it is unsurprising that Julian Assange and Wikileaks have reacted very conservatively and negatively to the anonymous statements this week. These sources may persuade some in the public and civil society that Julian Assange should now leave the embassy and report to Sweden where sexual assault complaints have been made, although no charges have been formally made. Yet Julian Assange is unlikely to emerge and will undoubtedly adhere to his lawyers advise, wisely.

Whilst the grand jury and investigation remains open against Julian Assange the possibility of a charge being laid before him remains a distinct possibility, no matter what anonymous officials may say. Therefore any move outside the embassy or to a country whom could extradite him to the USA remains a risky option for Julian Assange. Although the likelihood of Julian Assange’s extradition to the USA maybe looking less likely, the continuing investigation and intense pressure on Wikileaks and its affiliates continues to hang over Julian Assange and as such he is unlikely to leave the embassy for the foreseeable future. Indeed recent revelations related to the activities of the NSA and the unapologetic reaction of the Obama administration to these revelations reveals that in all likelihood the ‘war on wikileaks’ will continue, regardless of whether any case can be brought.