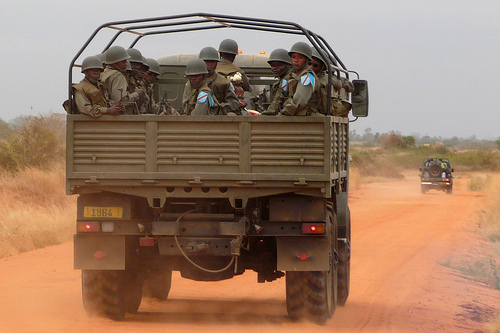 Senior UN officials and humanitarian groups in Central African Republic have allayed fears that mass genocide in the country is imminent. While the country remains without a substantial security force or government tensions between religious groups continue to rise.

While the notorious Seleka Muslim coalition in the country may have been officially disbanded back in September the tensions that were created between themselves and Christian religion groups remain not only very real but in great numbers. Senior UN officials and humanitarian groups such as International Medical Corps UK (IMCUK) have been assessing the escalating situation since as early as March this year when the Seleka movement was in full swing toward the capital city of Bangui.

Both have assessed that while the humanitarian situation in the capital city alone has been steadily and rapidly improving the threat of nationwide genocide over the religious conflict is a major worry overshadowing a lot of their work.

IMCUK announced on their website that: – “The overall situation in Bangui has improved with increased water supply and some supply of electricity throughout the city. Security concerns are now in the southeast and northwest regions of the country, where looting of towns has been reported.”

Such acts of looting along with widespread accounts of clashes between rivalling religious groups, big and small, suggest that areas in the North-West and South-East regions could lead to much larger movements that could involve the mass slaughter of those opposing the beliefs of different religious sects.

One account of such acts that have been reported was that of Lucie Feiganzanoli who reported that the Seleka movement had entered her village and left leaving people’s lives and homes completely destroyed. She also talked of how she had watched her husband beaten to death in front of her eyes: – “I saw the Seleka take my husband. They bludgeoned him. They attacked his mother after that, and killed him”.

She went on to tell reporters of AllAfrica.com that she had seen five of her village neighbours brutally murdered, whilst other members of her village were slashed and attacked with machetes by Seleka extremists.

However there also appears to be the same level of brutality from Christian extremists on the other side of the conflict in the country who call themselves that “Anti-Balaka”, which in the country’s Sango language translates to “Anti-Machete”.

Another eye-witness account from a village of approximately 2,000 Muslims says that she also saw her husband brutally executed this time by Christian extremists fighting for the other side of the religious battle: – “The anti-balaka came and attacked our house at 5am. They caught my husband on the veranda and sliced him on the head, the side, the back with a machete as they held him”.

This escalating issue is something that has not gone unnoticed with the UN hierarchy. In a recent report UN Secretary- General Ban Ki-Moon expressed his concerns that such if such problems are not solved in the very near future any foundations for the country’s future could be well and truly lost amid a violent and substantial religious divide: – “This cycle, if not addressed now, threatens to degenerate into a country-wide religious and ethnic divide, with the potential to spiral into an uncontrollable situation, including atrocity crimes, with serious national and regional implications.”

Conflict right now in Central African Republic is as of now taking place in much smaller numbers on a very sporadic basis. However the fears are that small extremists groups fighting for dominance for either the Muslim or Christian community that are popping up in small groups may create a snowballing effect that leads into an all-out conflict between religions. The Central African Republic remains, politically, as fragile and as precariously balanced as ever and efforts to enforce political stability have the potential to be completely drowned by these rising tensions.

Both the UN and humanitarian departments working in the country face a very important next few weeks in making sure that the right measures and strategies are put in place to avoid any imminent threat of religious conflict that has the potential to destabilize the entire nation.

Where’s our humanity gone? Is the Media blinding you?

Where's our humanity gone? Is the Media blinding you?