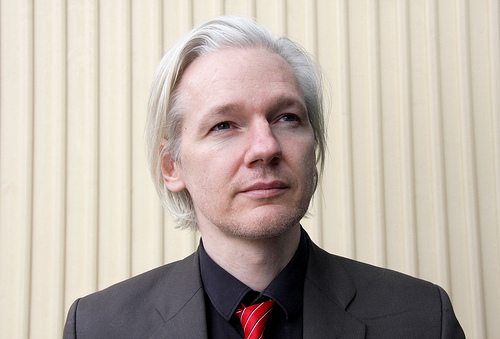 This week in the unavoidable news sphere an anonymous US government source, via The Washington Post, has announced that the US judiciary would not bring any charges against Julian Assange for fear of opening a pandora’s box of prosecutions relating to the publishing of information – as opposed to the leaking of it. Assange’s lawyer, Barry Pollack, was quick to point out that neither he nor Assange have received ‘a formal unequivocal statement from the Department of Justice’ guaranteeing that no charges will be brought against the Wikileaks founder. An understandable response. An anonymous source in a newspaper article can hardly be trusted as the voice of the US government, however it seems natural to assume that if there are inside sources voicing this opinions, such a statement cannot to far on the horizon. And so begins a new chapter in the ongoing saga of the polarising wikileaks founder.

The first and most significant question raised by the possibility, that Assange’s fear of extradition to the United States could come to an end, is, will he return to Sweden and face the accusations of rape that he has been hiding from for over a year. The year inside of the embassy has seen Assange’s credibility decline slowly but surely. Wikileaks, which had begun to wilt in his shadow, before his flight, has suffered significantly. As former hackers publicly denounced the restrictive control and paranoia, chronicled in We Steal Secrets, turned the organisation against itself. Meanwhile, numerous members of the public – myself included – who would oridinarily be inclined to support what Assange stands for, cannot understand why he as an individual has considered himself above a rape charge. There is of course, his claim, as reinforced by Pollack this week, that he has not gone to stand trail for fear of being illegally extradited to the US. However, considering, the charge comes from Sweden, a nation with a nearly two hundred year old commitment to absolute non–alingment in foreign policy issues. The fears that drove Assange into the Ecuadroean embassy seem to have been more of a convinience than a reality.

The key point is, that the narrative of Julian Assange is about to change. In the words of Phillip Crowley (The US state department spokesman, who resigned to protest Chelsea Mannings’ incarcaration) ‘With a US indictment not plausible, Julian Assange’s new narrative is information should be free, and rent too.’ Although intentionally facetious, Crowley’s remark gets to the bottom of the point. The wall is coming down and it seems that in the near future, if not already, Assange will have no legitimate reason to consider seeking diplomatic asylum in the Ecuadorean embassy. This is not to say that Wikileaks as an organisation has failed. In the same week that Julian Assange’s personal narrative has changed, the organisation has been in the process of releasing chapters of the Trans–Pacific Partnership Treaty (TPP). A treaty that is so important members of congress have not been allowed to review a full copy of the treaty, up until this week no one outside of the member states governmental administrations being able to fully understand the invasive implications of the treaty.

According to the chapters leaked by Wikileaks, the treaty, amongst other things, calls for the twelve member states to enforce the incredibly strict and arbritray form of copyright and intellectual property laws, with steep penalties for infringers. As Dan Gillmor, writing in The Guardian puts it ‘The more you know about the odious TPP, the less you’ll like it – and that’s why the administration and its corporate allies don’t want you to know.’ And the majority of what we know about the TPP comes from the documents released by Wikileaks. The orgnisation still functions well, surpassing the need to wait for individual whistleblowers, in a high enough position to access information, to be willing to selflessly sacrifice their livlihood, and increasingly their freedom, to release information everyone should have the right to review.

This weeks news as a result presents an interesting paradox for Wikileaks. Julian Assange stands on the brink of losing his credibility, he must either leave the embassy and be extradited to Sweden to face the judicial process, or stay in the embassy, essentially deciding he is above the democratic judicial process. Whilst the personal actions of Julian Assange should not necessarilly have an effect on the organisation he founded, the cultivation of his public image and his controlled running of the organisation has left the reputation of both inextricably linked. In real terms this may not have any effect, just because they have a bad reputation Wikileaks won’t stop realising documents to the public. However, the problem this presents is the means in which it may strengthen, Wikileaks opposition. Public opinion is the most powerful weapon when fighting against government censorship, and when the public has lost faith in the organisations fighting against it, the government is given the opportunity to strengthen it’s control.