The End of the Line for Kim Jong-un? 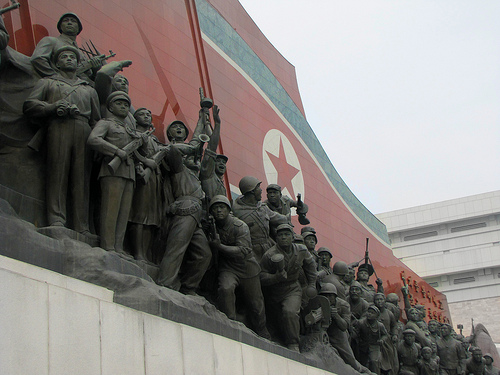 On November 14, Channel 4’s Dispatches released a programme about life inside North Korea, entitled Life Inside the Secret State.  The documentary followed Jiro Ishamaru, a Japanese journalist, as he trained reporters to infiltrate North Korea and secretly film once inside (an act that can be met with the death penalty).  What his investigators uncovered was horrifying: hand-held video footage revealed widespread child poverty, homelessness and starvation; images garnered from inside labour camps showed evidence of regular beatings and torture, psychological abuse and walls caked in blood.  This may come as little surprise to many, but the programme is the first of its kind to reveal – on camera – the true scale of suffering inside the world’s most secretive state.

Yet this is just the tip of the iceberg.  Repression blights the lives of everyone in this rotten society (unless, of course, you belong to the political elite).  Public executions, for one, are commonplace.  Eighty were killed at the beginning of this month alone.  Their crime?  Watching smuggled South Korean television shows.  In one case, 10,000 locals were rounded up and forced to watch a public shooting to act as a lesson to others.  Back in August, the execution of Hyon Song-Wol, a well-known singer and former girlfriend of the country’s ruthless despot, Kim Jong-un, took place behind closed doors.  Along with twelve other musicians and dancers, she was killed by firing squad for alleged involvement in a pornographic film.  Some say the leader’s wife was jealous and wanted rid of her.  Either way, it is clear that Mr Kim does not like his authority to be undermined.

The stories don’t end there.  Famine is endemic.  32% of children suffer from chronic malnutrition and up to half of the entire population is going hungry.  Then there are the political gulags, which blot the mountainous countryside.  A reported 200,000 North Koreans are currently interred in labour camps, often without proper food or sanitation.  1 in 100 of the population is thought to be a political prisoner.  More worryingly, satellite images analysed by Amnesty International, a human rights organisation, show that the camps – whose existence is denied by the government – are only increasing in number and scale.

What is most upsetting is that most North Koreans are unaware of the terror that envelops them, either because they are focused so much on survival or because they have been brainwashed by state propaganda.  A good example is the town of Kijong-dong, which lies just beyond the Demilitarized Zone (DMZ) that separates the two Koreas.  From the naked eye, Kijong-dong looks modern and bountiful.  At closer inspection, however, it is clear that it is a façade, just like the Pyongyang department stores that overflow with clothes and food, none of which can be bought.  The South Koreans who patrol the DMZ know when the lights of Kijong-dong will turn on and off, because it happens at the same time each day.  The doors of the buildings aren’t even real – they are painted on.  Little wonder, then, that those south of the 38th parallel know the town as “propaganda village”.  It is a fake; a fraud; a farce – just like the regime.

But the tide is turning against Mr Kim.  Although deeply upsetting, what the Dispatches episode also revealed is a growing dissension towards the political establishment.  People are slowly beginning to break free from the yoke of Communist control: western DVD’s are being smuggled across the Chinese border on memory sticks; women openly confront soldiers in the streets; families listen in on pirate radio; black markets are sprouting up in towns and villages; defectors to the South continue to roll in.  Politically, too, there are suggestions that the 65-year-old Kim dynasty is on its last legs.  Crackdowns on political dissent are becoming fiercer and more frequent – a sign that Kim Jong-un is losing his grip on power.  Last year there was a failed assassination attempt on him, and there are rumours of disgruntled factions within the army: a coup d’ etat is bubbling beneath the surface.

The beacons of revolution are burning brighter, and Kim Jong-un knows it.  Neither history nor time is on his side.  Most dictators usually end the same way: either killed on the run or at the hands of their own people.  But North Korea’s tyrant is unlikely to be bayoneted or bludgeoned to death.  Rather, it is the outside world that he should be fearful of.  This is the twenty-first century.  The technological revolution – the Internet, the mobile phone and social media – that’s what will bring him down in the end.