The London media, both on the Left and the Right, get Ed Miliband wrong. The Left sees him as the man to save social democracy and to fix British capitalism. The Right sees him as a dangerous leftist who will nationalise, tax and spend. Both are wrong and miss the real point about him- that he is an empty shell who believes in nothing other than the advancement of his own career. That he is a product of the post Tony Blair political environment, in which policy is determined by focus group and the desire for positive headlines rather than a leader having a cause they passionately believe in. An environment in which no one believes in anything and everyone is solely out to further their own career.

It is remarkable that in the tabloid press Ed Miliband has switched from a pathetic empty suit bound to lose his party the next election to a dangerous communist. What these papers get wrong is they assign an ideology to Ed Miliband, when he has none. Ed Miliband did not announce those policies in his conference speech because he passionately believes they are the right ones for the country. No, he announced them because a team of policy wonks, the Ed Milibands of the future, had come up with them. They were tested in focus groups and found to go down well, and so were inserted into his speech. I doubt he had even thought about them even a week before he strode on to the platform. That in my view is a far more powerful criticism of Miliband, than that he is the reincarnation of Karl Marx. 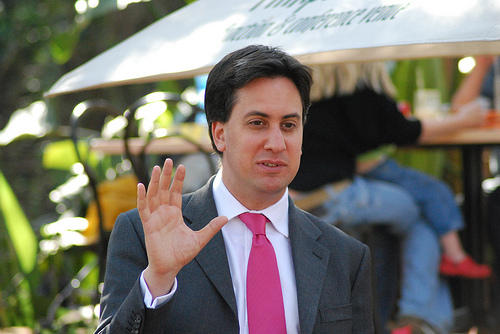 It is very revealing that the likes of Miliband, Cameron and Clegg consider politics to be just another career -like the City, management consulting or law – that the brightest minds from Oxbridge can choose to go into. We see this in the fact that they all went straight into the political bubble after leaving University. In my view this shows that they all lack any kind of ideology or belief system. Politics should not be just another graduate career option – but something more special. It should be something which people should go into because their experiences in the real world give them a cause or passion, a desire to change something. Politicians would be better able to govern if they had some real world experience before becoming MP’s, like the generation who fought in World War Two, such as Ted Heath, were able to, as they had faced death with those that they governed.

The difficulty for making these criticisms of Ed Miliband is that they can also be made against David Cameron and Nick Clegg. They also get their special advisers (paid for by you and me) and researchers to come up with policies, which are then tested in focus groups and made policy if found to be popular. Miliband is not unique, but merely a symptom of a political class that has no ideas or connection with the public.

The End of the Line for Kim Jong-un?