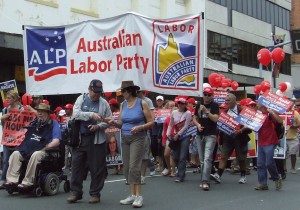 It’s always sad when cometh the end of a politicians career and we watch as they shed their beast like skin and become again the man they once were- albeit a little battered and bruised. One cannot help but feel a sharp pinch of guilt, that after all the daggers which were thrown; they were only human after all.
Kevin Rudd, the twice Australian Premier, has bowed out of the political pantheon. In a tearful exit, the former Griffith representative announced he would be leaving Australian politics for good and will now devote more time to his family. “My family is everything, always has been, always will be, which is why I will not be continuing as a member of parliament beyond this week.”
His departure has received a mixed response. Arch rival Julia Gillard has wished Mr. Rudd well and current Prime Minister Tony Abbott has paid tribute to his impact upon Australian life. Abbot in particular applauded Rudd’s success in 2008 when he issued an official apology to indigenous Australians, “it was a great moment in our country’s history and it happened because of him.” Although for others, Mark Lantham and alike, such resignation is long overdue. Mr. Lantham repeated his claims in a radio interview that Kevin Rudd was a “once in a century egomanic” who sabotaged his caucus colleges for his own personal gain. In regards to legacy, Lantham concludes that “history will be unkind” and any victory Rudd achieved in unseating Howard in 2007, has no doubt been undermined by his vengeful leaks against his own party in 2010.
When Rudd became ALP leader in 2006, he tipped his hat towards social democracy, criminalising the current paradigm and offering a discourse of reform and fairness. He bought his party back from political wilderness, giving them their first taste of government since 1996. This set the mark, making Rudd the most successful ALP leader in the post Keating era. However, such success was short lived and it wasn’t long before Rudd’s narcissistic personality took center stage. His short stint as Australian Prime Minster was riddled with accusations of exhibiting an over-bearing micro management style. By 2009 his popularity had waned, in revolt the caucus threw their support behind MS. Gillard. Ousted from leadership, Rudd engineered a mission to sabotage the Party’s future success and destabilise Gillard’s leadership.
His second chance as Australia Premier, after a downtrodden Gillard finally waved the white flag, was even less successful than his first. This time he did not enter office in a favorable political climate, his party was fraught and fractured and it was not long before his leadership traits which undermined him in 2009, became his downfall once more. In Rudd’s leaving speech, he advised his collages “To be gentle with one another.” Reminding us all how our political system which is built to expose human frailties does not provide a cushion to land upon, when such exposure causes them to fall. In the case of Kevin Rudd, he had a bigger cross to bear than others; but let’s hope that with his departure, Labor can finally lay this saga to rest. As a new post Rudd chapter begins, maybe the ALP can learn what Rudd never did, the mistakes of its past and become victorious once more.

Why Are We Protesting: A Look Into Protests

Why Are We Protesting: A Look Into Protests