I beg your pardon? A Poem about Alan Turing’s Pardon

I beg your pardon? A Poem By Dean Atta

Alan Turing’s pardon comes sixty years too late
Our country showed him no love then, just hate
By branding him a criminal, they sealed his fate
So I beg your pardon if I choose not to celebrate

And his punishment? A chemical castration
And he was one of many men throughout this nation
Facing prison or prohibition for this supposed crime
But now we live in more enlightened times

Can we pardon 50,000 other men convicted
For not hiding whom they chose to have sex with
Or being reported for what they did consensually?
Can we get some justice for them, eventually?

Because Tom Daley coming out made the news
And yet so many people said, “That’s not news”
But so many wouldn’t do the same in his shoes
Now that YouTube video has 10 million views

Alan Turing did not have that nor did 50,000 others
Who lost a war with the law for being lovers
We must pardon those 50,000 mothers’ sons
Because it’s not really justice if it’s just for one. 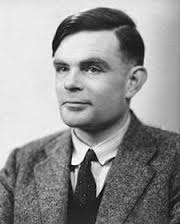