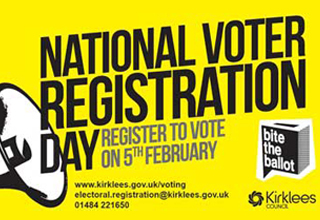 Hundreds of thousands of 16-24 year olds, hardest hit by government cuts, have lost the right to vote by failing to register, due to disillusionment with the party political system. Most young people now have the belief that every political party will act in a corrupt, unforgiving manner, and therefore exercising their political power through vote will make no difference in their country’s future.

An Electoral Commission Report found that only 56% of 19-24 year olds were registered to vote, compared to 94% of those over aged 65. Furthermore, only one in four of 19-24 year olds bother to vote. This has led to young people being the most under-represented group on the electoral register.

Clearly this has led to programs, benefits, and power for young people being cut, while older voters have their desires met. Politicians know that keeping the majority of their voters will keep them in office, and currently it is older voters who hold sway. By not voting, young people are cutting themselves off from politicians and the political process. If young people do not vote, politicians will not gear policies towards them, but rather towards older voters. It is the vote that keeps them in power, and writing policies for those who do vote-not young people- will see them winning elections. Older voters are wise to vote, and young people and minorities urgently need to do so or risk not having their needs met by the government.

There is a false belief that turning 18 automatically registers one to vote, and campaigns such as National Voter Registration Day (NVRD), organised by Bite the Ballot, are campaigning to raise awareness and increase voter registration, especially among young people. Bite the Ballot has teamed up with Rock the Vote, which has registered 5 million young people in the US since 1990. Furthermore, the National Union of Students will be holding events in its 600 unions in conjunction with the campaign.

National Voter Registration Day held on February 5th, seeks to persuade 250,000 citizens to register across the UK.  The website states that by registering, young people are demonstrating to government that they are “a vote worth winning, not one to be ignored.”

Mike Sani, the founder of Bite the Ballot, organised the campaign three years ago after frustration with his pupil’s apathy towards politics. In an April interview on this website, said Bite the Ballot was born after asking his students why they weren’t voting, and received answers such as, “I don’t know how to vote”,  “it doesn’t affect me”, and “nothing will ever change”. The campaign aims to shift this negative mindset on voting.

The 5th of February was chosen as the anniversary of the Great Reform Act in 1832, which first installed voter registration. The act was for white middle class men, but democracy has to take small steps, and it is crucial that minorities and young people do not lose this hard won right.

To raise awareness, Bite the Ballot has organised new ways to enroll voters, with social media playing a big role. The campaign is using Twitter’s blue tick verification, which will organise and follow debates among students, as well as provide a badge for any user who has registered. These badges will be displayed on all social media platforms, and the badges will be translated into credits, which can be traded for prizes such as music festival tickets. To reach out to a young generation, a social media blitz is required.

In later October, in an interview with Jeremy Paxman on Newsnight, Russell Brand damned “lies, treachery and deceit of the political class”, and called for a revolution, he was in sync with young people’s perception of politics. However, Bite the Ballot urges that not participating in voting does not solve any problems, but by becoming engaged with the political process, their views get heard, leading to change. In a video response on YouTube entitled “LOVE YOU RUSSELL BRAND. But you’re wrong”, Sani responded to Brand’s outburst: “I came from a school where I wasn’t educated in politics. I taught at a school where young people were not educated in politics. Obviously, yes, we begin to feel powerless and in many cases angry, but we need to ask ourselves why – why do we feel powerless and why do we feel angry? Because we are not told about anything and we are not educated on it. You said there’s no point in voting because we tried that already – we haven’t.”

Alvin Carpio, the Young Fabians Campaigns Officer, tweeted, “Don’t let politics die. Let this be a generation that recognises the value of politics as a change maker.” In an atmosphere of growing disenchantment with the political system, it is important that people, especially those whose voices go unheard, do not lose sight of the power of the vote to bring about change.

USA: An Obstacle to World Peace, Not a Threat

USA: An Obstacle to World Peace, Not a Threat