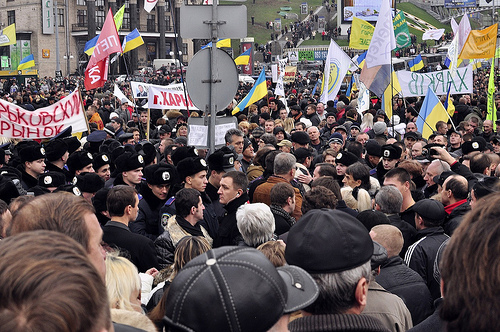 The US state of Ohio is the be subject to legal action after its new combination of drugs used for capital punishment took some 25 minutes to kill a prisoner. Observers have described a scene in which Dennis McGuire, a 53 year old convicted rapist, had clear breathing difficulties whilst experiencing intense pain and discomfort. Under the US constitution, even those being executed cannot be tortured. However, Ohio officials were unaware that the combination of midazolam and hydromorphone would have such an affect. Authorities were forced to adopt the new drugs as the Danish manufacturer of the previous supply refused to allow the use of their products for capital punishment. Whether judges will consider the shortage of lethal drugs to be McGuire’s problem remains to be seen.

Massive demonstrations are planned in Kiev after the governing Party of the Regions passed brutal new laws last week to quell pro-EU protests. Laws banning the placing of tents or loudspeakers in public spaces; the wearing of helmets or mask in protests; and the slandering of public officials have been passed regardless of the government’s bypassing of parliamentary voting procedures to carry the laws. The new threat of one year sentences of hard labour has failed to move protesters, who’ve used formidable barricades in Kiev’s Independence Square to protect themselves from police weaponry. EU officials are alarmed by the sudden and rapid lurch of Ukraine towards the dictatorial policies of its neighbours.

The World Cup, to be hosted by Rio de Janeiro this summer, is being used by city authorities to transform the city’s housing and infrastructure. Whilst the majority of the changes are unquestionably beneficial, the strategy of authorities in forced eviction of residents of slums has caused controversy. One such slum, Santa Maria, was being cleared for redevelopment: its standpoint on a hill gives it a majestic view of the city that would add to the value of luxury housing within it. Residents objecting to the ‘destruction’ of their community are organising talks with and protests against developers and local government.

The Liberal-National coalition government has been accused of breaking its promise to maintain funding to key aid NGOs despite its AUS$4.5 billion (£1.8 billion) cut to the overall aid budget as part of its austerity policy. The groups, which include Save the Children and Plan International have suffered cuts to state funding of 8%. The move marks a departure from the previous Labor government’s plan to meet the UN target of spending 0.5% of GDP on international development. The chief executive of Care Australia complained: “This [cut] is for aid we had already programmed this financial year. We are now going to have to scramble to work out where we can cut.”

The Kenyan government is to invest £720 million, together with private investors, in nine solar power stations that will meet half of the county’s electricity demand within just three years. Together with the construction of Africa’s largest ever wind farm in 2015, the plan could lower electricity costs by between 50% and 80%, making Kenya a pioneer in improving sustainability in the developing world. Green campaigners and international financiers alike are delighted with what promises to be an economic and environmental fillip for one of Africa’s strongest economies.

Leaked documents show that the Innovative Pharmaceutical Industry Association South Africa (IPIASA) was planning a secret £270,000 lobbying campaign against proposed legislation that would bypass certain drugs patents where public health is threatened. In effect, patented drugs could be produced by rival manufacturers without the huge profit margins that exist normally. IPIASA planned to build a ‘coalition’ of journalists and academics hostile to the law, claiming that if it was passed in South Africa is would threaten the ability of patent holders to profiteer elsewhere. The content of the leak has annoyed medical charities, who have long campaigned about the scandal of lifesaving drugs being denied to poor patients in the developing world in order to maintain profits.