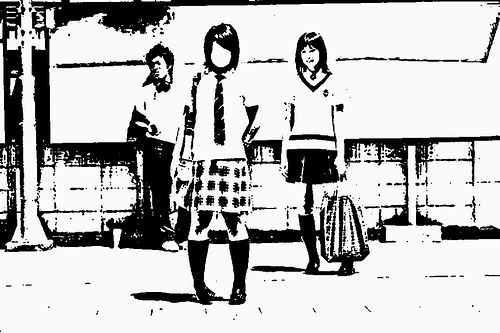 For me the English customs and conventions function as some kind of time machine, providing a faded insight into our past. Thus, as I first discovered the crowd of pupils in their school uniforms, I was not sure if I should associate them with lost Hogwarts students or with escaped characters of a history book. Which appears so alien to my life belongs to the daily routine of UK citizens: with 82% of the UK students following a dress code, school uniforms certainly represent a well-established and common practice. However, why has the popularity of clothing policy in schools remained stable or even increased up to the present days?

Uniforms, as the name foreshadows, create a certain unity among the students from one school. In fact, students might develop a certain sense of identity, as well as of togetherness in relation to their institution and their fellow pupils. Especially if their family background lacks this unifying bond, its promotion in school seems to be a vital contribution to the child’s psychological development.

Another favouring aspect might be based upon the equality of opportunities. Putting every student in the same outfit means that social divergences such as financial background become less obvious. Under those circumstances, one discrimination criterion might be sorted out, although not all the potential victimizing parts such as weight or height can be eliminated.

Another argument, even if controversial, represents the financial burden of school clothing. On the one hand, school uniforms could trigger a financial relief to many families, as they are spared from the constant pressure of regularly providing their children with the latest fashion in order to dodge oppression. On the other hand however, one might reject this argument, with grounded opinions on the additional amount of clothes to buy for their children. Besides school, pupils need a “free-time wardrobe”, which preferably portrays an in vogue outlook. In that regard, parents need to spend extra money besides the clothes children require anyway.

Comparing England to a country from overseas, countries such as Luxembourg completely disclaim the dress code in schools. Yet how would the daily grind of a Luxembourgian pupil alter when wearing for school a compulsory uniform? Could it enhance as it is so often claimed attendance and discipline?

As I was spared from attending school in a certain dress code, I can confirm that a school uniform would have extended my minutes of sleep. In a society where “fine feathers make fine birds”, most of the students, especially female pupils, invest a significant amount of time in their clothes and looks. School is the institution where all of the students gather and where people do inevitably make their judgements. In that way, it is not surprising that so many students devote or maybe waste so much time in their styling, when clothes represent an essential part of the physical appearance.

However, a liberate and individual way of dressing might be a distraction in regard to the academical purpose, as it was the case in Luxembourg in 2011. An article in the “L’Essentiel” engaged with the sparely and often provocative dressed girls and boys, who apparently preferred displaying their looks in front of their classmates rather than striving for any academic achievement. Yet is it really astonishing in a society where girls look up to a “twerking” Miley Cyrus or an almost pornographic performance in Rihanna’s “Pour it up” music clip? In that regard, school uniforms might serve as a necessary approach of directing the young generation’s eyes to other values than solely naked skin.

Nonetheless, a much discussed counter-argument to school uniforms concerns the loss of individuality. A dressing policy in school is believed to restrict students in their personal way of expressing themselves and of disclosing their personality. Teenagers find themselves often disoriented, in a progress of self-evaluation and development and therefore a physical restriction could trigger revolts among a crowd of youngsters. However I cannot help but wonder if this argument might catalyse the transmission of a wrong message among society. In fact, claiming that clothes serve as a vital characteristic of a personality, does this not sustain the superficiality covering our eyes?

Individuality and personality- do those criteria really depend on clothing? What about attitude, the way of behaving and treating our fellow people? What about the power of words? Is it not possible to assert oneself through communication?
If individuality would be under serious threat if everybody would wear the same outfit for school, than I think we have reached a critical point and seriously need to question our values. After all, school should remain a place where other qualities than looks should be boosted.
-Laury Schaack

Crimea belongs to Russia, Ukraine does not: What West needs to understand about Crimea