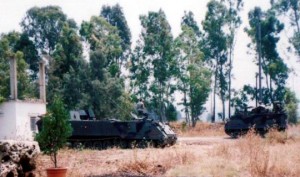 Situated at what some consider to be the heart of the most turbulent region on earth, Lebanon’s dismissed present is a product of a violent and torrential past. From as early on as 12 BC, to as late as 2006, the history of Lebanon has been that of handovers, violent wars and desperate defence. It is a country known for its explosives, for the extremists who do not represent the majority, and for its brutal civil war lasting over a decade (1975-1990). It is a history which has inescapably seeped into the present, making itself known in the bullet-scarred buildings considered a pointless renovation in the face of a hardened acceptance of the future. A manifestation of the reality of Lebanon can be seen in its youth, who’s evolution from childhood to adulthood has been affected, in at least the smallest of ways, by the spectre of their countries’ past.

‘You have an impressive ability to absorb hardships such as power cuts. Yet you rarely confront the causes of them. You invest more than any country in the education of your youth. Yet they feel excluded from changing the country for the better.’

It is a frustrated generation. They live in the twenty first century, an epoch of change, modernity and evolution. They see the world change around them, see countries meeting their potential despite the devastation of the previous century which at two occasions choked the whole world. They cannot understand why it is their land of azure sea, picturesque mountains and unique history and culture that continues to suffer and be left behind, wedged in between two nations (Israel and Syria), who’s conflict inevitably spills over, wedged between fanatics whose angry calls for war and a perceived justice mingle with the Muslim call to prayer and Church bells. It is a feeling of helplessness, and more significantly, abandonment, as the world moves and changes and grows, leaving a nation of constant dispute behind to its’ own devices.

To list all the isolated Lebanese bombings of the past year would be difficult. The summer bombings of Beirut in early July and early August of 2013 stand out and remind us of the grim name the Lebanese often give summer; bombing season. ‘They do it to destroy our tourism,’ the general angry outcry rings. The inevitable questions rise ‘Who are ‘they”, ‘Who has claimed responsibility for the last one?’, ‘How many dead, how many injured?’. True to the general and hard-worn pattern, the country will be at a momentary standstill, and then, inevitably, life will go on, because it would be impossible to function if each disaster would be given full accord. Today’s young will look to the old, to the callous way in which past bombings demarcate years and months, and accept a reality which ought to be forbidden.

This set of circumstances leads to the inevitable human instinct; escape. It is difficult to find an exact number of Lebanese citizens and ancestors who currently live outside of Lebanon full time, but an estimated 10,000,000 people of Lebanese descent live outside the country, in comparison to the 3,500,000 who currently live in Lebanon. A Lebanese teenager will grow up in a foreign country with an inexorable disconnect to the land they will proudly call home but will never want to live in. And then there are those who do live in Lebanon, who will love and hate their country simultaneously, love it for its mountains and beauty and the jovial nature it wears on, but hate what it has become.

Despite all the invasions and outside influences, the greatest enemy of Lebanon are its’ own people. Older generations will still point to streets and neighbourhoods, commenting ‘this was once a Christian stronghold’, or ‘Muslims controlled this street and this building’. The ‘us’ and ‘them’ truth of Lebanon exists past the explosions and the wars, to the mentality of its people, who grew up socially conditioned to this reality and bring it into the next generation. The sense of helplessness, that the status quo cannot be changed, leads to a listless apathy which we can only hope today’s youth will not carry through. The Herculean task of shaking off a past laden with too much dispute cannot be entrusted to them alone; the international community has a responsibility to Lebanon. Equally, Lebanon has a responsibility to itself.

Cuba struggles to retain its brightest and best despite unprecedented reform