In a country that has been sensitized on rape, the responses from the politicians and some big names remain insensitive. “Boys will make mistakes,” Samajwadi Party Leader and father of the Chief Minister of Uttar Pradesh, Mulayam Singh Yadav said of rape in a public speech recently. His remarks making light of such a heinous crime illustrate just why the feminist battle in India has barely begun. He firmly believes new rape laws, introduced after the 2012 rape-and-murder of a Delhi woman, are being misused by women to punish their boyfriends. “When their friendship ends”, Mr. Yadav asserted, “the girl complains she has been raped.” Mr. Yadav’s lieutenant, Abu Asim Azmi, meanwhile invoked Sharia law to call for the death penalty – but, for the victim. “Even the woman is guilty, “he quoted to a Mumbai daily.

Mr. Azmi believes that if “any woman, whether married or unmarried, goes along with a man, with or without her consent she should be hanged”. Banwari Lal Singhal, a BJP leader  in Rajasthan state wants the state government to prohibit private schools from making girls wear skirts as uniform, citing it as the reason behind the rapes. He demanded that girl students be made to wear shirts and trousers as uniform to reduce chances of their being subjected to lewd  comments or harassment and underpinning his statement, he further added that the proposed school uniform would save the students from extreme weather conditions too. The Rasthriya Swayamsewak Sangh (aide of BJP party) chief Mohan Bhagwat recently claimed that the incidence of rape were the result of western culture society as a whole and that erosion of traditional Indian values were more pronounced in urban areas.  Spiritual leader Aasaram, who is currently in jail for the alleged rape charges, had earlier courted controversy for suggesting that the victim of the brutal gang rape cum-murder in Delhi (2012) was equally responsible for the crime and saying the girl could have called her assailants brothers and begged them stop.

The bitter truth, though, is that these kinds of attitudes are not exclusive to the Samajwadi Party, BJP and spiritual leaders only. From the Puducherry Minister who wants women covered up in over coats to the Delhi community leaders who scapegoat Africans for rapes; from Shiv Sena leaders of Maharashtra who blame migrants for rape to the Haryana Khap Panchayat leader who says it happens because of hormonal excess he attributed to chowmein (chinese noodles) – there is no shortage of Indians willing to blame rape on anything and everyone other than the rapist.

The hideous truth is that in India, as in many other countries, there is something that can only be described as pro-rapist lobby that extends beyond political pulpits into the streets and homes. The renewed feminist activism of the recent years has left patriarchy scrambling for new bogeys and new ways to protect itself. Ill-informed scaremongering about the “draconian” provisions of the new amendments to sexual assault has been a handy tool.  Very often it is claimed that the women did not fight back otherwise it could not have been a rape. For India’s women, rape is part of a continuum of violence that begins in the womb. 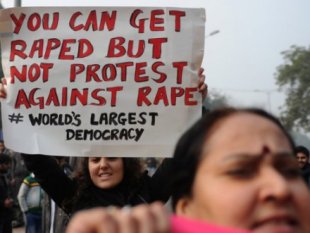 Contrary to the myth that rural India is safer than urban India of 24,923 cases registered in 2012 by police, 3,035 took place in major cities. Reports show that there is a great diversity in the way targeted women act or dress. Women are raped from the age of three to ninety three. Rape is an act of violence not sexual gratification. The suggestion of avoiding walking alone, especially at night is a common suggestion to avoid sexual assault. However, only 9% of rapes are committed by strangers and in the overwhelming majority of the cases, the perpetrator was known to the victim. Moreover, it has been found thatmost rapes are pre meditated i.e they are either wholly or partially planned in advance. The data also tell us the typical rapist is not a feral juvenile, crazed by raging hormones or bad up bringing.

Young doctors Vasundhara and Geetanjali told that studies have indicated that as few as 5% of men are psychotic at the time of their crimes and that men who commit sexual violence come from every economic, ethnic, racial, age and social group. The common pro-rapist thought that the women did not fight back during rape is well contradicted by the famous local social activists Amandeep and Adesh Hooda. According to them, men who rape or sexually assault women and girls will often use weapons or threats of violence to intimidate women.

Faced with the reality of rape, women make second by second decisions, all of which are directed at minimizing the harm done to them. At the point where initial resistance, struggling, reasoning have failed the fear of further violence often limits women resistance. For many years, studies have suggested that false reporting rapes are no different from false reporting rates for any other crime in India. Hence, if you have been raped or experienced any other kind of sexual violence, no matter where you were, what you were wearing, if you were drunk or under influence of drugs, it was not your fault and you did not deserve this.

The pro-rapist thoughts have rightly caused outrage. They should also lead to some hard introspection into how many of us believe slightly more benign version of those very words to be true.

BY: Vikramaditya Sangwan (Writing from INDIA)

Vikramaditya completed his Bachelor’s degree in Civil Engineering at Kurukshetra University in July 2013. Has a great passion for administration, management and spreading awareness. He was engaged in student campaigns and frequently wrote for the school and college magazines.