CZESLAW ZNAMIEROWSKI – A MULTICULTURAL ARTIST FROM THE USSR

At a time of great division in the Eastern European community a lesson in multiculturalism, unity and brotherhood can be learned from an unusual person, a Soviet Lithuanian artist Czeslaw Znamierowski (23 May 1890 – 9 August 1977). He was born in Imperial Russia on Latvian territory into a Polish family; at the age of 32 he became a citizen of the Soviet Union and soon after moved permanently to Lithuania, where he lived until his last day.

As a student he was taught by some of the greatest artists of Lithuania and Russia, like Ferdynand Ruszczyc, Arkady Rylov and Nicholas Roerich. As an artist he worked with Georgians, Ukrainians, Polish, Latvians and others on a regular basis, while his paintings weren’t just sold within the Soviet Union but all over the world to countries like Switzerland, United States, Canada, Germany, Sweden and other Western nations.

“For him [Czeslaw Znamierowski] there were no boundaries between nationalities. He readily made friends with the natives of any country…. He was no stranger to Latvians, Lithuanians, Jews, Tatars, Karaites, Russians. He was ready to help everyone if possible.”

Although Znamierowski was a believer and advocate for socialism, as many were at that time, he was also a very kind, accepting and happy person who never forced his ideas onto others. That can be seen in his artworks and the manner in which he created them. An overwhelming majority of his paintings is dedicated, not to communism, but to nature while his style and colours are soft, gentle and flowing. When he did paint images of Socialist realism they were always associated with nature, progress and collaboration. Never with war, aggression or conflict, something that Znamierowski knew well, living through, and almost being killed during the October revolution of 1917, and then surviving the horror, as well as the aftermath of WWII.

As difficult as his life was, people who knew Czeslaw always said he was an optimistic, happy-going individual all his life, even in his old age. Outside of art he loved gardening and pigeons. In fact his garden was one of the major attractions of Vilnius city and drew numerous tourists each year. It was that beautiful and unique. 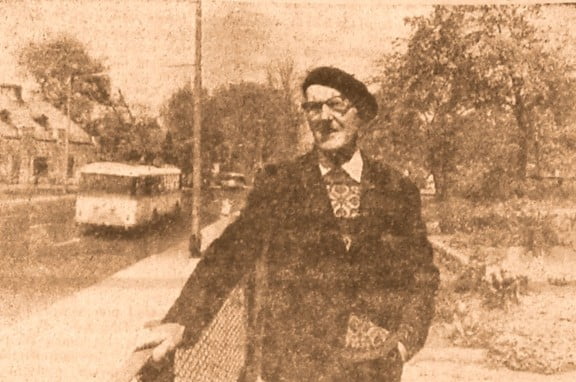 Czeslaw Znamierowski greatly contributed to Lithuania and all Baltic states at large. He started the Vilnius Artist’s Society; he donated many of his artworks to public institutions locally and abroad; held many solo exhibitions in Lithuania, Poland, Latvia and Russia, but above all he gave those nations and the world some of his largest panoramic artworks ever created in the Soviet Union. To understand the scale of his artworks one only needs to see Znamierowski’s Panorama of Vilnius City which measures 8 meters (26.3 ft) long and 2.5 meters (8.2 ft) high, or his most known artwork The Green Lake which is 2.5 meters (8.2 ft) long and 1.45 meters (4.8 ft) high. That is the type of artist Znamierowski was; he meticulously, perhaps even nonchalantly and with great pleasure, painted his massive masterpieces that took center stage at large public buildings and museums, locally in Lithuania and all across the USSR. That is why in 1965 he was awarded a prestigious title of an “Honourable Artist of L.S.S.R.”

Over his lifetime Znamierowski created about 3000 works of art, many of which were paintings that are in state museums across the globe. A lot of his art is in private collections as well as art funds, and, as it happens with many artists from the past, some of Znamierowski’s artworks are simply lost. His largest painting Panorama of Vilnius City has disappeared without a trace after the collapse of the Soviet Union. Hopefully it will be found one day. Fortunately his second largest artwork The Green Lake has been located, restored and preserved by the Tamoikin Art Fund, which is now graciously displaying it for the world to see. This fund has started a non-profit art project to locate, research and present to the world Czeslaw Znamierowski’s artworks, historic records and other significant information about him. A great deal has already been uncovered but even more is still ahead. To contribute or learn about this project visit: www.CzeslawZnamierowski.com