Sick and tired of Milan Fashion Week’s frenzy and chaos? Just take a break at Villa Necchi-Campiglio, an authentic gem of design from the 1930’s, hidden in the very heart of the city.

Less than 450 metres from Piazza San Babila, the mansion was built between 1932 and 1935 as the Milan home for wealthy Necchi sisters Nedda and Gigina, and Angelo Campiglio (Gigina’s husband).

The family made its fortune through a sewing machine business, and through selling mechanisms for small appliances. They needed a sumptuous house in Milan to receive their eminent guests (such as Princess Maria Gabriella di Savoia) and, undoubtedly, to showcase their prestige.

Italian architect Piero Portaluppi was commissioned to build the house with total freedom, and an unlimited budget. The result was an unusual, elegant, and bizarre villa, with an incredible attention to displaying its expensive and fine details.

Surrounded by a magnificent garden, any detail inside and outside the structure combines specific functions with aesthetic demands: a small grating hides the heating of an open-air pool, a lift and several beverage carts connect all the three floors of the house, but are concealed inside the walls. The dining room is something spectacular, and was meant to amaze the visitors: it is entirely decorated with real parchment. Hard to believe, but true. 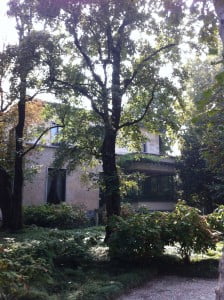 A splendid veranda connects the external garden with the inside of the house: the architect’s attempt to unite the house with its garden. A complex and well-planned system of windows permits the light to fill all of the rooms.

Lozenges are the characteristic mark of Guadaluppi: these are everywhere. They decorate the ceiling of the living room and the corridor on the first floor, as well as the external facade of the villa.

The ornate, antique furniture from the eighteenth century enriches the house, and the bedrooms combine comfort with luxury. The two grand and spectacular bathrooms are endowed with the most luxurious contemporary facilities for the time: the showers and baths comprised of entire blocks of exquisite marble.

The villa was donated to the FAI (Italy’s National Trust) by the sisters, who died without any successor. The house was opened to the public in 2008, following seven years and almost 6 million euros of restoration.

Villa Necchi-Campiglio was also the set for the 2009 movie I am love starring Tilda Swinton.

With time to spare, one should not miss the gorgeous sculptures designed by Adolph Wildt. From the main entrance of the villa, the sculpture is located on the facade of a building, on the corner between Via Serbelloni and Via Maffei. On the facade is a marvellous and gigantic ear made of bronze, used as a doorphone, and is the most ancient doorphone of the city.

Student Values: Where have they gone?

USA, global super power, Is it really A federal state?

Edoardo is a philosophy student in Torino, Italy. He has always been fond of classical music and operas and tries to combine his philosophical studies with music and especially philosophy of music. He is particularly enthusiastic about opera modern adaptations. Edoardo also maintains a strong passion for films, literature and travelling. He also writes reviews for Operaclick and Bachtrack.

USA, global super power, Is it really A federal state?