Ganesha Festival: Welcoming the God of creativity and knowledge

Ganesha festival of India is a celebration of music, dance and devout faith 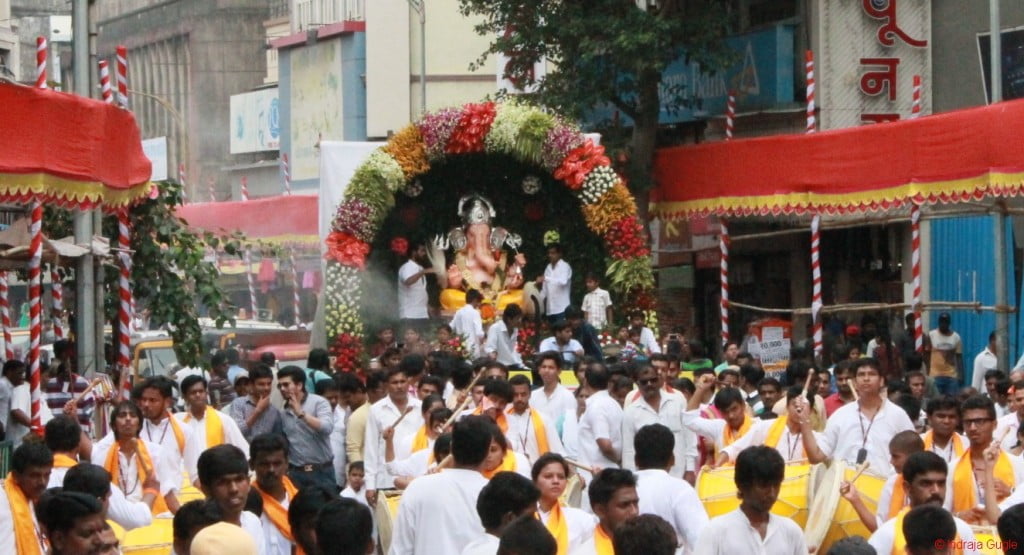 The procession on the last day of the Ganesha festival in Pune.
Photo credit: Indraja Gugle

The street is filled with a multitude of people as the roads of the old city are barricaded to keep vehicles out. There are phoolwalah’s (florists) selling garlands and coconuts, little kiosks of toys and knick-knacks. Amongst the sea of people, emerging like lotuses in a pond are large marquees with gigantic elephant-headed idols inside. People are bowing their heads in devotion, their eyes closed in prayer even amid constant commotion. ‘Hold my hand or you’ll get lost!’ Mothers caution children.

Devotional songs play from large speakers and the elephant-headed idols watch all this excitement surrounding them with cheer. The Ganesha festival in Maharashtra is held every year around September. Indians welcome Ganesha, the God of knowledge, arts and creativity into their homes. This ten-day Hindu festival is celebrated with the greatest fervour in west and south India, especially Maharashtra.

The monsoon season in India appears to be less gloomy because everybody is in the festive spirit from June. Each person has a role to play – women are busy cleaning, dusting and making sweet, steamed modaks (Ganesha’s favourite food), children and youngsters are preparing for their performances in the procession on the last day and men are trying to participate as much as possible amid work.

Families worship clay idols in their homes with garlands, incense sticks and a special offering every day. Beautiful rangoli (mandala-like patterns) are drawn with coloured powder on the ground in front of the house to keep the negativity out. The enthusiasm is tangible, contagious.

During the British Empire, Lokmanya Tilak, a freedom fighter, made the Ganesha festival a public celebration in order to bring unity to the Indian society. If he were alive today, he would be overjoyed to see followers of all religions come together to celebrate this festival. 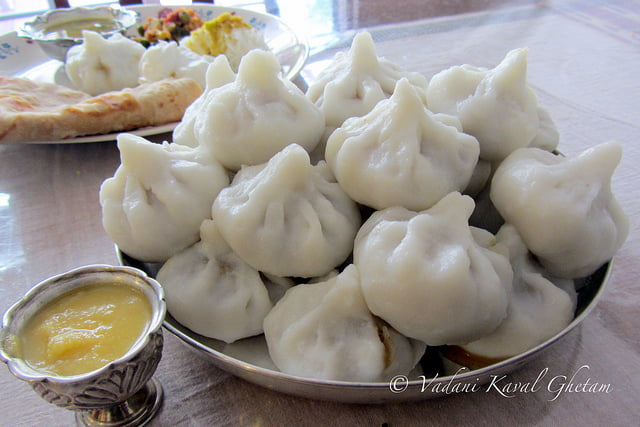 Pune and Mumbai are the most famous places known for their elaborate celebrations. Neighbourhood associations and youth groups aim to set up marquees with the tallest and best idols, and the festivities are funded by local residents and businesses.

Walking down the old city of Pune, amongst clusters of centuries-old wadas or houses and trades that are forgotten, are five unique Ganesha idols of the highest honour. Kasba Ganpati, the seventeenth century idol from the family of Maratha, King Shivaji, enjoys the first honour. It is followed by Tambdi Jogeshwari that sits on a silver palanquin and whose head resembles an African elephant. Every year, the idol is sculpted without using a mould but it looks exactly the same year after year.

In the busiest shopping street called Laxmi road is Guruji Talim, the third Ganesha of honour. It is decorated with gold jewels donated by the local traders and was established over 100 years ago as a symbol of Hindu-Muslim unity. Opposite the Gurji Talim, inside a narrow lane is the fourth Ganesha of honour, the Tulshibaug Ganpati. Every year, Mr Vivek Khataokar sculpts a 15-feet tall fibre glass statue that sits in the busiest market of Pune – Tulsi Baug.

The fifth Ganesha of honour is the one established by Tilak himself in 1893. The Kesariwada mandal or group has an idol humble in size and is greatly respected for the cultural and educational programmes it conducts. The melodious voices of the greatest Indian classical singers can be heard here during the ten-day festival.

In addition to these, the Dagdusheth Halwai Ganpati is the most famous one in Pune. Seated on a throne of pure gold, it is known to fulfil wishes. 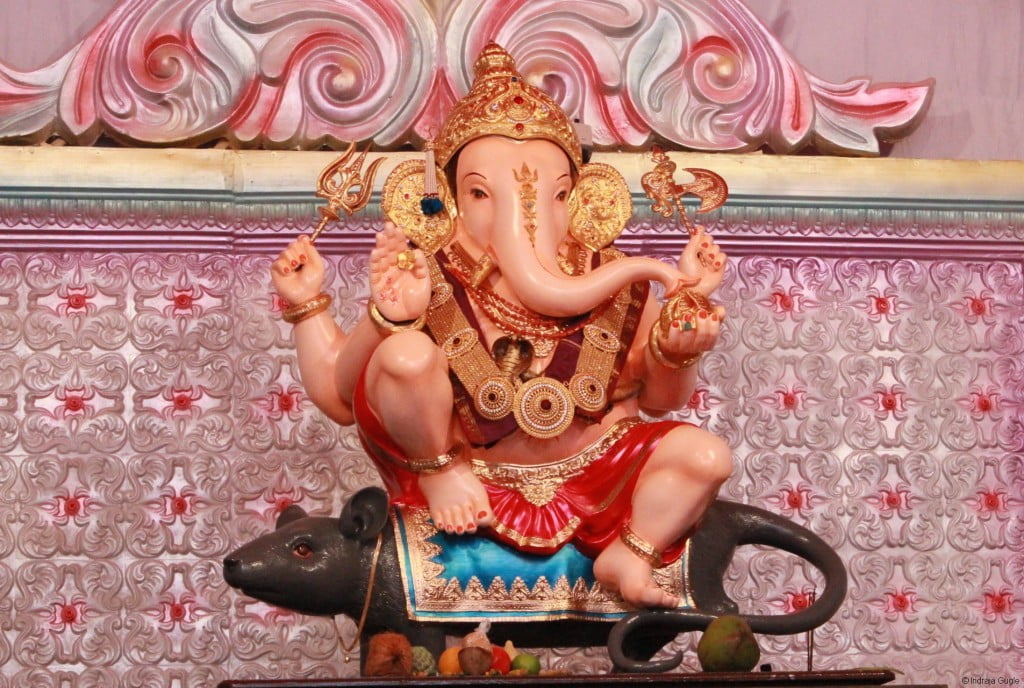 Local food is as dazzling as the glittering gold. In the old city, Bedekar Misal offers authentic Maharashtrian misal pav – buns served with a mixture of sprouts and pounded rice, topped with hot, spicy and watery gravy, best enjoyed with a tall glass of buttermilk. A glass of sugarcane juice from a kiosk right across the road would also help put out the fire in the mouth.

At 180 kilometres away from Pune is Mumbai, the Big Apple of India. The festivities here reach fever pitch. Life in this metropolis is breathtakingly fast and people are constantly on the run. But when it comes to the Ganesha festival, Mumbaikars won’t mind waiting in serpentine queues for up to 20 hours!

Lalbaugcha Raja, or the King of Lalbaug, is the most visited Ganesha pandal in Mumbai with almost 1.5 million visitors a day! This 20-feet tall statue is said to fulfil wishes, so no wonder the queues are long. It is best to come here on the two days when the Gauri festival is running simultaneously as it is less crowded then.

While Lalbaugcha Raja may be the most popular, the tag of the richest definitely goes to GSB Seva Mandal Ganpati. In 2014, the idol adorned with 6o kilograms of gold was insured for Rs. 25.9 million (£ 2.75 million).

A break from Ganesha touring might include exploring the city’s heritage buildings in the Kala Ghoda (Black Horse) district, the Gateway of India and the Chor Bazaar (Thieves’ Market). The goods here are not stolen but second-hand and often vintage. Grand Mumbai offers special Ganesha festival tours, besides a host of others that involve tours of markets, slums, and temples.

It is impossible to miss the local Maharashtrian snack, vada pav sold at every corner. Award-winning street food joint ‘Anands’ is a great place to find this delicacy of bread and spicy potato patty that comes with salted green chillies. 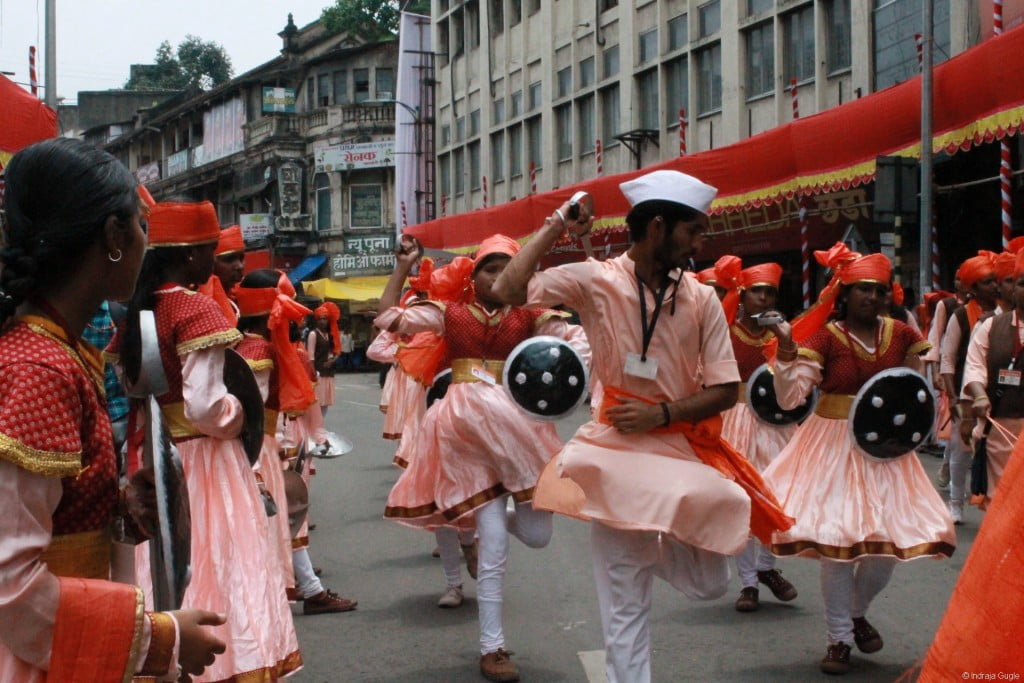 The major attraction comes on the eleventh day when there is a large procession to bid goodbye to the beloved Lord Ganesha. The air is full of energy. The streets adorned with large rangolis are packed with huge mobile stages. Ganesha statues stand on these stages surrounded by thousands of drummers, dancers and gymnasts on the street. The babble stops for a collective chorus of sacred rituals. The lead percussionist of a troop raises his stick to strike the first note on the tasha, an Indian snare drum. Breaths become strained with concentration. The large troop follows with their dhols (Indian drums) to create a zesty, unique rhythm. The street erupts in loud cheer. Lord Ganesha is being bidden farewell with a show of creativity and skills. The idol is immersed in water amidst cries of ‘Ganpati Bappa Moriya! Pudhchya varshi lavkar ya!’ which translates to ‘Oh Lord Ganesha, come even sooner next year!’

How to get there –

Direct flights are available from London to Chhatrapati Shivaji International Airport, Mumbai. Pune is a further 180 kilometres away, easily reached by bus – MSRTC Shivneri and Prasanna Purple buses ply regularly between Mumbai and Pune. There are a host of taxi services available like KK Travels. It is best to pre-book a taxi.

In Pune, Hotel Deccan Park on Fergusson College Road is an ideal place to stay during the festival. It is a 10-minute rickshaw ride away from the old city. Rooms are available from £26 to £55 per night. For those who would prefer a more intimate dialogue with Pune culture, Raheja Gardens offers homestays for £21 per night. It is 40 minutes away from the heart of the city but only a 10-minute rickshaw ride away from the colonial Camp area – a favourite for shopping and heritage buildings.

In Mumbai, visitors are spoilt for choice in terms of accommodation. However, considering the proximity from major Ganesha attractions and places of historic significance, Fariyas Hotel and YWCA guesthouse are both great options. Rooms range from £58 to £100 and £24 to £71 per night respectively.

GOT A BUSINESS IDEA? TAKE YOUR BUSINESS TO THE NEXT LEVEL!

GOT A BUSINESS IDEA? TAKE YOUR BUSINESS TO THE NEXT LEVEL!