Another person of colour dies mysteriously in the hands of the American ‘justice’ system, and no one is charged

Due to the many recent deaths of black men and women in America, it seems that being black in this country is a crime. The recent and tragic death of Sandra Bland, a 28-year-old black woman, who was pulled over by an officer in Texas for allegedly not signalling correctly and for allegedly resisting arrest and assaulting an officer,  is another example that supports this argument. Bland was found dead in police custody three days after her unlawful arrest. Despite a recent autopsy which stated that she died of self-inflicted asphyxiation (another way of saying that she committed suicide), her unexpected and unexplainable death has captured the attention of the world, with controversy surrounding her mugshot. Black Americans are screaming injustice, police brutality and racism. 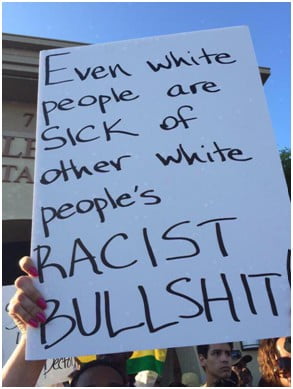 What should have been a simple warning of a minor traffic violation quickly spiralled into a forceful and, based on the video footage, violent arrest whereby Sandra Bland can be heard screaming, ‘you slammed my head into the ground’.

Furthermore, the mugshot released of Ms Bland, has created even more controversy especially on Twitter where some are claiming that Ms Bland was on the ground and possibly already dead when the mugshot was taken. This assumption is due to the positioning of her dreadlocks, the fact that her cell had tanned walls but her mugshot background is grey and, notably, her unfocused eyes and lifeless facial expression. Clearly answers are needed.

The question that is on everyone’s mind is what really happened to Sandra Bland and did she truly commit suicide? From the video footage, Bland clearly stated that she will be taking the police officer to court and that she knew her rights. She was strong-spirited and did not sound like a woman who was considering taking her own life. At the age of 28, Sandra had a lot to live for, especially after securing a job at her previous university. Her life was stolen by those who were supposed to protect her. Let us never forget this wretched injustice. #SayHerName.

These questionable altercations have occurred way too many times in America and a lot of the time, the charge of the crime is simple: being black. Blacks in America have always been negatively stereotyped and negatively labelled. We do not want to make this a war between Blacks and Whites because both Black and White Americans are outraged and disgusted; however, we still cannot dismiss or deny that sadly, it is Black Americans vs White cops and that black lives are being overlooked and failed by the American justice system. Despite human rights laws, America continues to fail Black Americans and automatically demonises them as violent criminals. When will it stop?

Who speaks in the name of Islam?