‘Patient safety is the very reason we get up in the morning. This is why I have always wanted to do this job’.

For the first time in 40 years, January the 12th 2016 was a day that saw doctors walk out of the hospitals, onto the picket line, and strike. Opposing the new contracts Jeremy Hunt and the Conservative Party have threatened to impose in order to ensure the 7-day NHS they promised in the lead-up to last year’s election, junior doctors up and down England have swapped their scrubs for placards in an effort to overrule the crucially disastrous alterations to their contracts — and this is why you should support them. 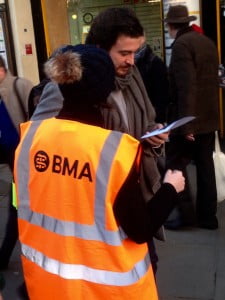 For those unaware of the details, the debate between the BMA (British Medical Association) and Health Secretary, Jeremy Hunt, has been going on since 2013, and is solely the result of the BMA demanding negotiations after the government moved to introduce the contracts without consulting the medical majority. Proving so far unsuccessful, the BMA and Hunt’s body of advisors have failed to reach an agreement on the issue, leaving many junior doctors feeling that the only way to emphasize the seriousness of these proposals is through industrial action. Drafted with more work hours, yet no extra funding in mind, the new NHS employment contract includes three prevailing alterations: 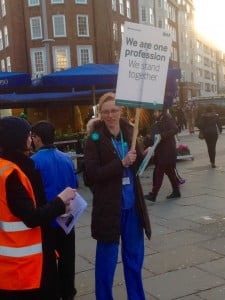 So, currently the next generation of NHS staff will be overworked, underpaid, and consequently undervalued. Such was the argument of BMA rep for Sutton Hospital, Dr Aislinn Macklin-Doherty.

Speaking to Shout Out UK, she outlined how:

‘The government’s current plans, which are to include no extra funding and the removal of safeguards which currently ensure doctors don’t work too many hours, will stretch an already stretched workforce. Junior doctors feel angry and attacked — 98 per cent of them wouldn’t have unanimously voted to strike unless the circumstances were as severe as they are’.

The government has responded to the doctors’ decision to strike as dangerous, with David Cameron himself declaring that:

‘This strike is not necessary, it will be damaging. We are doing everything we can to mitigate its effects but you can’t have a strike on this scale in our NHS without there being some real difficulties for patients and potentially worse’.

And yet, the facts seem to suggest otherwise as Dr Macklin-Doherty explained:

‘There will be more doctors at work on the day of the strike than there were on Sunday. So for those who oppose the strike for moral reasons, this is simply dumbfounding because the risk to patients today is no greater than any other day’.

Still, the idea of a large majority of our healthcare system going on strike can prove to be — even to one as supportive as I am — an incredibly daunting prospect. Not only does this produce the self-realisation of how vital these people are to my everyday, unpredictable life, but it invites me to look beyond the present disruption which the government are insisting is the main issue. Rather, their attempt to highlight the disruption caused by Tuesday’s strikes to patient services seems highly, and overwhelmingly, ironic. The real downfall here is not the 3,400 operations that had to be cancelled, but rather the poor, stretched and possibly dying service that patients will go on to receive if these contracts become a reality. 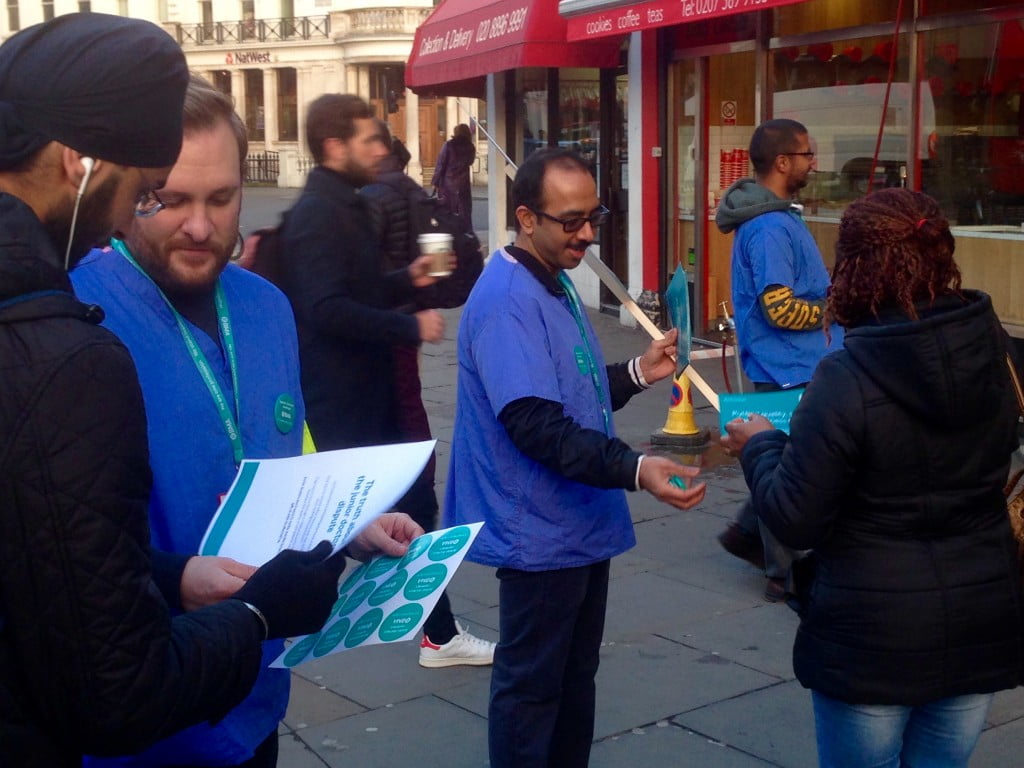 These strikes place stress on the undervalued and rather blatant truth that the NHS, and the selfless, hard-working people who run it, are on the brink of being stretched beyond capacity to provide a level of service that will be virtually impossible. This leaves an important question: when the NHS’ declining state — and ever-worsening fate — is eventually evident and openly recognised, who will get the blame? Something tells me it won’t be those sitting in Parliament, whose experience, and knowledge, of hospital wards is limited to the few orchestrated events spent wandering around with their PR team and a media circus.

This latest saga of industrial opposition to the Tory handling of public services — with the recent announcement of the TFL tube strike being another fine example of failure after services were extended with no extra funding — clearly highlights the path the NHS has been on for some time, and the direction it’s heading in.

‘They have outlined a very clear five-year plan’, Dr Macklin-Doherty explains. ‘Simon Stevens (Chief Executive of NHS England) has written about new care models and within that they very much emphasize streamlining funding and involving private investment. This is not a hidden agenda, it is very clear where this is going. PFIs (Privately Funded Initiatives) have already been introduced and they are failing because private services cannot provide the same quality of care that the NHS has been providing for 60 years. They do not have the same expertise, but more importantly, they do not share the same interests. They are motivated by factors that are not compatible with healthcare’. 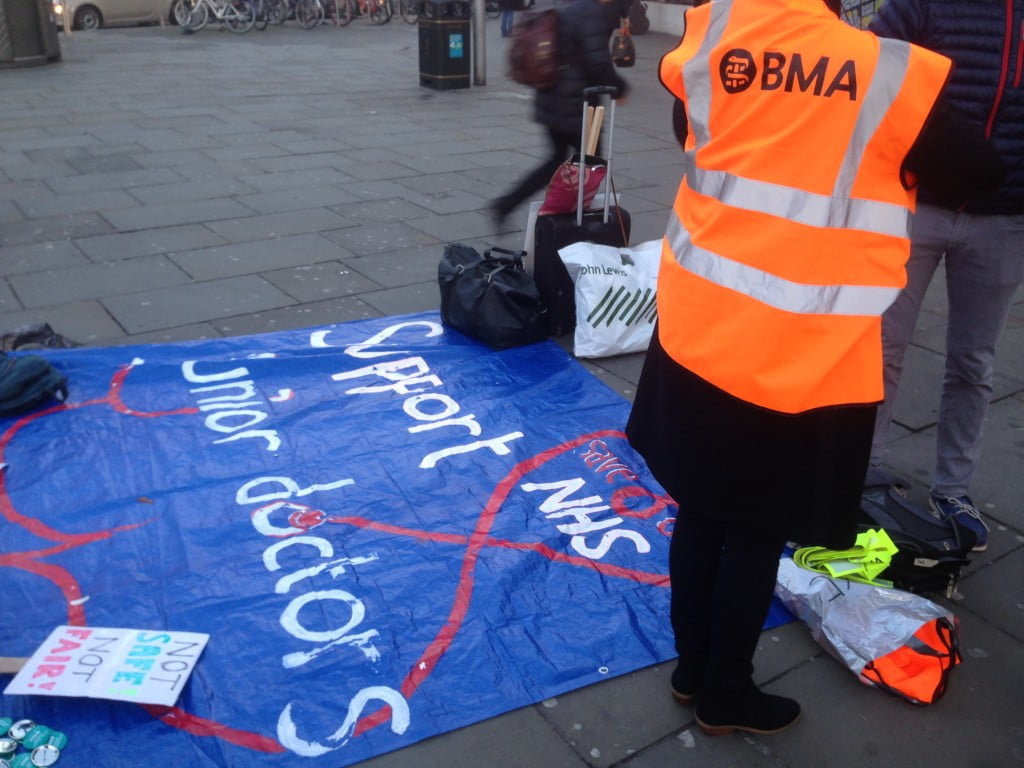 Such seems to be the case with Hunt himself. Coming from a business background — establishing and owning two businesses himself, before going on to be the Secretary of Culture, Sport and Media until 2013 — he boasts experience and duties that have very little to do with healthcare. Arguably, this is evidence enough of the Conservatives’ plan to turn the NHS from a public service, into a business.

Such intentions have left many junior doctors, such as Macklin-Doherty opting to strike. ‘I feel it is morally my duty to resist this detrimental contract for patients. I work in this job. I see it every day. I know what the effects will be. The government does not’. And this is profoundly true. The quality of life junior doctors experience is inextricably linked to the quality of life, and subsequent care, the British public are able to receive. In undermining it, Hunt’s proposed new contracts arguably undermine, and undervalue, every single one of us. It seems overwhelmingly futile, and medically regressive, to open hospital services 7 days a week in order to be seen as more efficient; yet when it happens, the quality of care will be strained, exhausted, and financially undervalued.

Attending Tuesday morning’s strike, what struck me most was the misconstrued nature of not only the strikes – I have learnt to expect as much from today’s general media output – but the doctors themselves that made it happen: this was not a day off.  Lining the streets, rallying outside the hospitals, and answering questions for London commuters concerning the nature of the strikes, it dawned on me that we often forget the kind of people that make our National Health Service what it is. There has never been any space for personal profit or financial gain in the NHS; not from the founding forefathers of 1945, nor the lambasted ‘Moet Medics’ of today. Rather, it is an institution with very few others like it that solely runs on the desire, and the need, to help people. The doctors marching on Tuesday morning were profound evidence of this. They shared an unspoken, universal belief in equality, fairness and unrelenting hard work — aspects they embraced with open arms from the very moment they sent off their UCAS applications.

When you bring the situation back down to the everyday reality these doctors lead, it is only ever about providing the utmost medical care that took seven years of studious hard work to achieve; and why would we ever question, undermine or sabotage that?

Tell Jeremy Hunt and The Department of Health that its #TimeToListen. Show your support for the #JuniorDoctors by tweeting @aislinnmacklin and @TheBMA

Why must we force children to abandon compassion?