CND Protest March: The Power of the Orator

Jeremy Corbyn impressed a crowd of 60,000 with his inclusive and heartfelt speech aimed towards every person standing in the cold

The cold wind whipped through Trafalgar Square, through the press-pit that I was standing in, just below the famous monument to Lord Admiral Nelson. As the speakers and the minutes rolled by we could feel the anticipation grow as each speech brought us closer to the final and most eagerly anticipated speaker, Jeremy Corbyn, leader of the Labour Party. That is not to say that people had not been eagerly awaiting Nicola Sturgeon but it is Corbyn’s commitment to the Campaign for Nuclear Disarmament, something he has been a part of for fifty years, that makes him stand out. This is the power of a person such as Corbyn, that people will stand for hours in even the most comparatively unpleasant conditions to wait for the words that emit from his vocal cavity.

Strong words they were. Lining out his views, views that he has exhaled time and time again, he once more enunciated that ‘I want to be here because of my belief in a nuclear free future [and the] … crying needs of the poor and homeless in this country’, the latter element of the statement referencing how the £100 billion saved from scrapping Trident would be spent.  However, what was intriguing was the point at which applause from that statement arose, because it did not arise when he mentioned a ‘nuclear free future’ it came just after Corbyn said ‘I want to be here’. 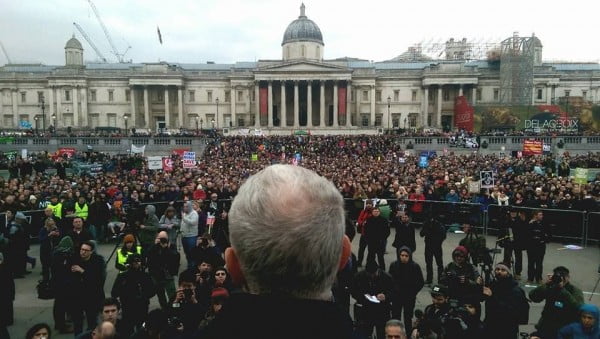 People like an orator, a speaker, to commune with them and make them feel like they are not following one person but that they are part of a group of people walking towards a better world. Then again, this is no surprise, Corbyn had come down from Sheffield that afternoon just to be there. Having joined the CND movement in 1966 at the age of just seventeen, Jeremy Corbyn has grown up with the Campaign for Nuclear Disarmament and has been associated with the organisation for the entirety of his political life. However, the point is that one of the incredible strengths of Corbyn and what enabled him to keep sixty thousand people engaged for every second of his speech, was the incorporation of his audience into his centre circle, making every person feel like they were his closest comrade. ‘We solve these problems together, sharing and working together’.

‘THANK YOU for coming to this demonstration. THANK YOU for showing that you care and THANK YOU for wanting a peaceful future for this country and the rest of the world’, Corbyn shouted in one last crescendo to Trafalgar Square, saliva flying towards the multitude of DSLR cameras enveloping me. It was this last thunderous combination that kept us most engaged. Corbyn was a man who seemed to want to shake the hand of every individual but only had a few seconds.

This should have crowned his speech, but note the irony of a man fighting for disarmament while standing in front of a memorial to a soldier who fought using the most advanced weaponry to hand to defend his country. Had it not been for Nelson’s use of evolved weaponry, if anything, the nearest equivalent to Trident, Corbyn would not have been able to stand as he did on that cold Saturday afternoon in Central London.

WWE’s Wrestlemania 32 PPV is heading for a flop