Clinton VS Trump: Campaign spendings and earnings, do they determine the winner?

Let’s look at Trump’s and Clinton’s spendings, in particularly, who spends more on what

With September over, Donald Trump’s campaign is still trailing behind Hillary Clinton’s spendings and fundraising.

Last month, both campaigns started spending faster than they raised money. Clinton’s fundraising edge allowed her to end the month with more money in the bank than Trump.

Republican Donald Trump’s campaign massively escalated its spending in September, paying out $70 million over the course of the month, according to a new Federal Election Commission disclosure — about $15 million more than he raised.

While Mr Trump’s spending spiked last month, he didn’t direct the bulk of his funds to growing his staff or his ground game operation, which has trailed far behind Mrs Clinton’s. His spending on payroll grew by just $200,000 last month, while his spending on field consulting shrunk by about $100,000.

There were many areas into which Donald Trump’s funding went. For instance: advertising, on which he spent $23.2 million; digital consulting, where he spent $20.6 million; air travel, totalling $6 million; and finally, data management costing $5 million. Furthermore, campaign merchandise production, such as hats, cost him over $3.7 million.

Although Trumps spendings have nearly doubled, his campaign infrastructure remained almost untouched. Trump had 168 people on his campaign staff, rising from 131 in August. On the other hand, Hillary Clinton has had 815 paid staffers last month according to a campaign official. But does this mean that having a bigger campaign makes you more likely to win an election?

Well, throughout the election Hillary Clinton has been quoted saying, ‘I’m so far ahead of Donald in the polls that he doesn’t cross my mind’. This reveals a different side to Clinton, not the charitable one she usually displays but the one she prefers the public not to see, her boastful side. The fact that she knows she has such a big campaign screams of overconfidence to the general public.

This is clearly shown by the current polls with Clinton having 46.1 per cent of votes and Trump having 40.2 per cent. The implication is that Clinton is forecasted to have a 93 per cent chance of winning the election. 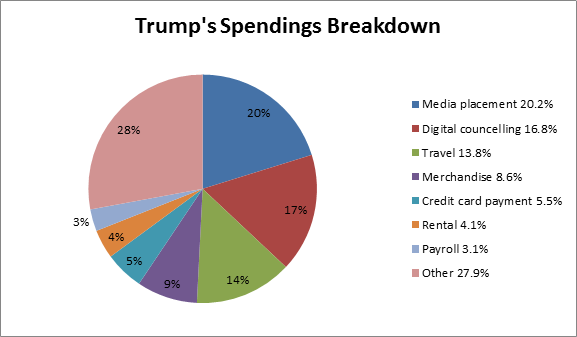 Clinton’s media investment was almost triple the $23 million that Trump spent to put ads on the air in September. Trump’s campaign shelled out nearly $21 million more on digital consulting and online ads, while Clinton’s committee spent $866,000 on online ads. But the Hillary Victory Fund, a joint fundraising committee between the campaign and the Democratic Party, spent another $26m on online ads over the last three months.

Clinton spent a total of nearly $95 million through her campaign and two joint fundraising committees in September, exceeding the $85 million in campaign contributions raised through all three entities. About 27 per cent of her money came from contributions of $200 or less. When October began, she still had more in her campaign coffers than Trump; Hillary Clinton had $59 million to Donald Trump’s $34.7 million.

Clinton’s army of fundraisers, which includes extensive outreach small dollar donors, hundreds of bundlers and big names such as Barack and Michelle Obama, Joe Biden, Bernie Sanders as well as her own husband and daughter, continues to provide her campaign with a flow of cash. However, when it comes to Trump, he still remains his biggest donor having given himself at least $54 million.

On the other hand these figures do not illustrate Hillary’s full story. Hillary Clinton has paid herself over $250,000 from the campaign money since April 2015. Her first transaction was for $74,042 on April 13, which was the same month she started her campaign. Since then Hillary has made seven more transactions totalling $254,447. Her actions were seen as diminishing because no other presidential candidate has done this according to the Washington Free Beacon. 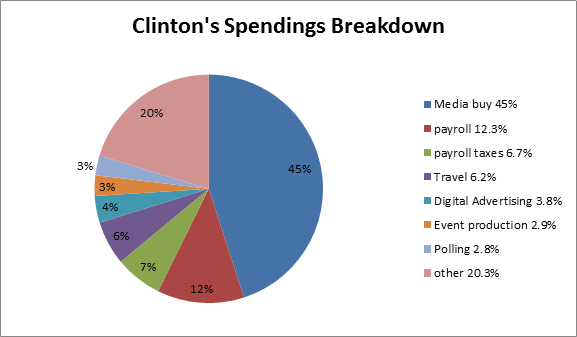 Republican nominee Donald Trump has raised over $449.1 million and spent $352.9 million to date, giving him a total of $96.2 million cash in hand. These figures are depicted across the month of September and the early days of October 2016. However, the Democrat nominee Hillary Clinton has a different story. Clinton has raised over $949.6 million and spent a total of $773.2 million to date, giving her a massive $176.4 million cash in hand.

I’ll end this with saying that whoever spends $3.7 MILLION on hats has a real obsession with them or has a lot of money and time on their hands. Donald Trump seems to have a well-fought campaign with  a lot of wealth backing it, whether it be from his own pocket or from private donors. However, Clinton’s campaign has raised nearly triple of what Trump has raised, and this shows her dominance over him throughout this election.

Mars One – Mission Impossible or the Future? You decide …

Heathrow vs Gatwick: The Grim Verdict

Heathrow vs Gatwick: The Grim Verdict