15% of scientists think climate change is caused by human activity, true or false?

Climate change is the most important issue facing our world. The most significant challenge humanity has faced in its two- hundred-thousand-year life.

On the 26th of July, Tackling Climate Change, an event held by Model Westminster and the Department for Business, Energy and Industrial Strategy (BEIS) set out on the all-important task of education. 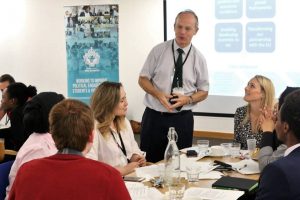 The event totalled around 25 participants who gathered in the Westminster Conference Centre for the six-hour event, with sandwiches and refreshments provided. Speakers included civil servants specialising in the fields of Fuel Poverty, Research, Climate & Energy, and Civil & Nuclear Resilience.

Once everyone had arrived, the day began with an icebreaker led by the infectiously enthusiastic Grant Fisher and Charlotte Best. After the cobwebs had been shaken off and attendees were settled in we were introduced to Richard Mellish (Deputy Director, Fuel Poverty & Obligations).

Mellish opened with what would prove to be a difficult issue. He explained that his goal was to help those in fuel poverty in the UK. That is, those who can’t afford to heat their homes in the winter months. He challenged the common misconception that the fuel poor were largely pensioners and renters. In reality, of the 2.5 million in fuel poverty in the UK, a shocking 50 per cent own their homes and the majority are of working age.

But helping people out of fuel poverty is a catch-22. We need to find ways to heat people’s homes and improve their health but can we do it at the expense of higher CO2 emissions? The solution, it seems, is housing insulation and moving away from fossil fuels on a national scale.

Next we moved on to a pub quiz (sans pub). It was at this point that I realised the need for events like Tackling Climate Change. As a news junkie, it’s easy to assume that everyone is up on the key facts and statistics of important issues like climate change. But then a question to this effect was asked:

Since 1991, what percentage of climate scientists claim that climate change is happening and is driven by human activity?

The answer, I knew, was extraordinarily high. Unsure whether it was 99 per cent or 97 per cent I opted for the latter which, as it happens, was correct. Imagine my surprise when another team thought the number was as low as 15 per cent. 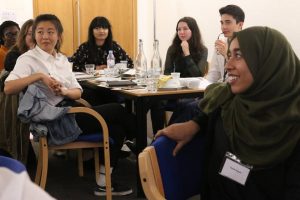 The reveal of the massive figure sparked hushed exclamations of shock. Apparently amazed that the consensus was so overwhelming. Even considering all the enlightening information that preceded and would follow, this was probably the most valuable result of the event.

Catherine Bremner (Deputy Director, Head of Science), took the stage. Bremner proceeded to break down the causes of climate change and inevitable disasters if we continue on our current path. Bremner also broke down the common misconceptions about climate change. Particularly the idea that global temperatures and CO2 levels fluctuate independent of human activity. They do, but since the industrial revolution in the 1850s both have risen at a rate higher than any known point in the history of the planet. She also provided a fascinating explanation of how researchers use ice cores to discern the composition of the air from pre-historic times. 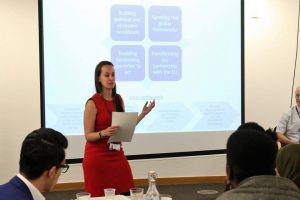 A Bit of Hope

Thankfully, it wasn’t all bad news. After lunch, Pete Betts (Director, International — Climate & Energy) took to the stage. He explained that the explosion of green energy sources was a reason to have hope for the battle against climate change. With technology like carbon capture and countries like the UK and France as global leaders, even the (ahem) issue with the current US Government may be surmountable.

Finally, the four tables were assigned different countries and given a guide to help steer preparation. Madagascar, the UK, the US and China. Each group was given a fact sheet for their own country as well as the three others. The following thirty minutes were prep time for what would prove to be a heated debate. Each team was assigned to represent their given country in a four-way negotiation. The goal being to represent the interests of our countries in a realistic way as if on the international stage. 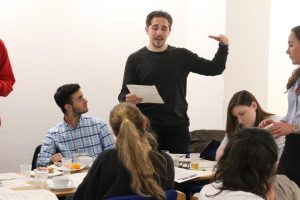 As China, we had a strong moral position as both the world’s largest supplier and market for renewable energy sources. Despite what have been called cynical motives. China is a rare case of a country that has exceeded its goal of reducing CO2 emissions according to the Paris Climate Accord of 2009. Though some have accused China of using its dubious status as a developing nation to negotiate an easier target, the result is the same.

Despite our strengths there were points that could be used to undermine us, so our guide suggested we ask questions of other countries (mostly the US) early so that we might set the agenda.

And so, the poor group that were assigned the United States were roundly lambasted from all sides (particularly our rather enthusiastic group). But in fairness, they managed to rally and make the best possible defence of a frankly indefensible position.

What can we do?

To round out the day, Charlotte Best and Siobhan Browne led a short exercise in which we discussed what individuals can do to combat climate change and reduce their own CO2 emissions. From the obvious, like using public transport or turning off the light when you leave a room to the more abstract concept of climate veganism and vegetarianism, there is a massive amount we can do in our everyday lives. Though apparently my suggestion to ‘fart less’ isn’t one of them.

To wrap up the day certificates were handed out and a group photo was taken to commemorate the day. Model Westminster and BEIS roundly succeeded in turning a potentially dry political and scientific topic into an exciting and challenging experience. It wouldn’t be an exaggeration to say that events like Tackling Climate Change are exactly what the world needs. Because education is fundamental to overcoming the greatest danger humanity has ever faced. 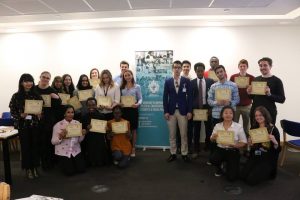 Playing It Safe: Why Building Isn't Just About Bricks And Mortar

Why Anna Soubry is every young Remainer's hope against Britain's downfall

Why Anna Soubry is every young Remainer's hope against Britain's downfall