Grenfell Tower 6 Months on: How Aesthetics over safety destroyed lives

Six months after the worst post-war tragedy occurred in London at Grenfell, the survivors and members of the Royal Family gathered in St Paul’s Cathedral to remember the 71 victims of a disaster that not only brought London together but also split it apart.

Staring over the A40, the charred remains of Grenfell Tower stand as testament to the fire that ripped through on June 14, just six months ago. The blaze, started by a malfunctioning freezer catching fire in one of the kitchens on one of the lower floors of the building just after midnight, ripped through the 21 floors of the tower in a matter of hours as it was fed by the flammable padding lining the outside of the newly renovated tower block.

Forty fire engines  with two hundred and fifty fire fighters attended the incident, with the first arriving within five minutes, and were soon followed by tens of ambulances and hundreds of medics.

Into the morning of June 15, as the survivors made their way from the horror that was unfolding behind them, the community came together as people welcomed the survivors into their homes or led them to awaiting ambulances to be treated for shock, minor injuries or most commonly, smoke inhalation. 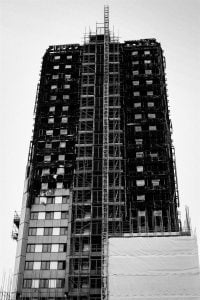 Though the fire brought the borough of Kensington and Chelsea closer as the sun rose over that fateful morning, its ramifications in the months since have run deeper as the controversy over the circumstances of the fire were revealed.

Firstly: the block itself had a ‘Stay Put’ policy, in the event of a fire in a tower block. This policy is implemented when the fire can be contained and put out within a matter of minutes. On this occasion however, despite the fire breaking out of control and spreading with speed, the stay put order was not lifted until 02:47am.

Secondly: the padding wrapping itself around the building was not flame-resistant and just two pound per panel cheaper than flame-resistant padding that could have saved a significant number of lives.

Thirdly: behind this is the duty of care the then Conservative council had to the occupants, to listen to their queries and keep them safe. On this occasion they had ignored their pleas for the instillation of a sprinkler system and had instead focused on the aesthetic repairs rather than those related to safety.

As such, the service in St Paul’s Cathedral yesterday not only served as a reminder of those 71 victims of the Grenfell Tower fire but also as a fact that these deaths could have been avoided. Grenfell is a cruel call that there is much work to be done to improve the quality of life for those living in London‘s tower blocks.

For more impressions on Grenfell, see articles by our correspondents Erik Green and Oliver Freeman.

Cannibalism in North Korea: Beyond The Headlines