Should Government Change Gears When It Comes To Cycle Safety?

It should come as no surprise that the government aren’t always clear about their aims. From conflicting policies to changing ideas; most of us have a hard time keeping up. And, top of the unclear agenda recently has been cyclists on roads; specifically, whether the government cares about them.

For a good few years, those up top have made attempts to get us to take to two wheels instead of four. Let’s not forget our trusty Santander bikes, all thanks to Boris. Not to mention the cycle to work scheme, and the countless attempts to get cars off our roads. Don’t get us wrong, it makes complete sense. Air pollution, made much worse by cars, is something we should all care about. Not to mention that anyone who’s tried to get across London at rush hour should be behind schemes like these. 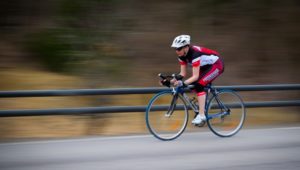 But, if the government are so behind bikes on the road, why aren’t they doing more to protect cyclists? The number of cyclists killed on the road rose by a massive 5 per cent between 2015-2016. As more bikes take to the road, that number is sure to rise. In some ways, this increase is to be expected. If more bikes are taking to the road, then cycle-related accidents are sure to increase. But what are government going to do about it?

To say that nothing’s been done would be a little unfair in this instance. As of October last year, sentences for those who kill cyclists became much harsher. There’s even a possibility of life sentences which was never an option before. That’s progress for sure, but it seems like a bandage rather than a cure. After all, in most incidents, accidents like these are, surprise surprise, accidental. So, while these measures will lead to drivers being more careful, nothing much will change.

To further muddy the waters, other higher powers are now trying to STOP cyclists from using certain roads. Most recently, Highway England has applied for an order to ban cyclists from the A36 between Hull and North Cave. This route forms part of a trial time course which has been used by some of our cycling greats, so unsurprisingly the attempt has been met with protests, and it seems rightly so. After all, why urge us onto roads you’re then going to ban us from using?

It’s confusing stuff, indeed, and it impacts our generation more than most. After all, we’re the ones who are most likely to hop on our bikes. In fact, the lifestyle suits many young people in the UK at the moment. For those in jobs which offer a Cycle to Work scheme, this is the ideal way to get to work for less. But, is it really worth the saving if we have to risk our lives in the process? Many of us experience accidents on the road and never get back on the saddle. This is especially the case in inner-city areas, where rage between cyclists and drivers often reaches peak levels.

But, this deliberation begs the question of what can be done to make us feel safer? More of us would undoubtedly take to two wheels if we knew there was less risk of an accident. So, if the government want us to take them seriously, what would need to be done? 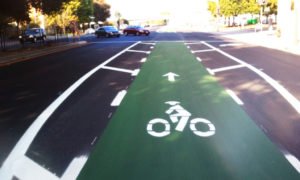 Admittedly, we currently have bike lanes popping up in more and more areas. But, there’s still a long way to go before there are safe bike lanes available across the country. What’s more, many of these run parallel to roads and don’t increase safety at all. If a driver chooses to drive too close or express their rage, cyclists could still be at risk. Which suggests we need to look at new places for these bike lanes. Does anyone remember Boris’ idea for a SkyCycle route from Stratford to London? The plan may not have materialised, but the plans are still out there and worth considering.

Raised cycle platforms like these would undoubtedly ease congestion on inner-city roads. Not to mention that they would eradicate the possibility of bike and car collisions. Brian MacDowall from the Alliance for British Drivers states:

‘If the cycle lanes could run along major routes without loss of road space to motorists, then it would help’.

This is especially prevalent given that thinning of roads is a significant issue where typical bike lanes are concerned. That said, with an estimated price tag of £200 million for 6.5km of SkyCycle, it’s unlikely this plan will be put in place anytime soon.

Perhaps, then, it would be more realistic to ask for more off-road cycle paths. On-pavement options seem like a good way forward, though again, this isn’t practical in areas where roads are narrow. Either way, it’s past time the government came up with a new plan to make space for bikes on the road.

Safety gear as a must

As it stands, there is no legal requirement to wear safety gear when you cycle. It’s not even necessary to wear a helmet if you don’t want to. But, if the government want more of us on the roads, isn’t it about time they made a change here? The arguments against a move like this are substantial. Making safety gear mandatory would turn people off cycling in a significant way. After all, helmets and body gear are hardly the most stylish things in the world. Don’t we have a right to look good while we’re cycling? Perhaps, but as more of us take to the roads, the need for safety gear becomes more apparent than ever. Besides helmets, it seems laws including full-cycle body protection wouldn’t be out of place. Yet, only last November, Jesse Norman, minister for roads and local transport, announced no plans to change the laws here.

Again, this could leave us asking how much those at the top care about the people they send out on bicycles. After all, surely bike safety should be the priority? Undoubtedly, the number of cyclists would fall in the aftermath. But, continued benefits will get people interested again. Besides, plenty of users are put off by safety risks anyway. So, what’s stopping laws like these being approved? 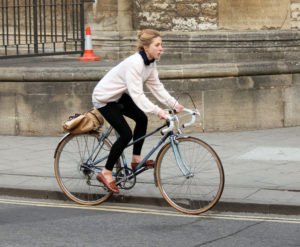 Of course, it isn’t entirely fair to put this issue onto someone else. It seems reasonable that us cyclists should take our share of the responsibility. We are, after all, the ones who are taking risks. And, it should be down to us to ensure that we’re seen when we do so. But, there’s a small issue with that; the amount of fatalities taking place suggests that we’re failing at the task. As such, surely the government should step in here, too?

Much like the debate over safety gear, this is something which comes up in government time and again. But, still, no law has been passed to this effect. In truth, the cause for this failure is harder to find. After all, not all visibility measures involve unflattering additions. Something as simple as making it mandatory for bikes to have lights, or manual spraying which is regularly cleaned, could make a difference. After all, a brightly sprayed bike will be difficult for any driver to miss. As it stands, many cyclists still aren’t seen, especially after dark. At least if this were a legal issue, more people would think twice about their visibility.

There have also been calls of late for bikes to be treated more like cars. From a safety perspective, you could say it makes sense. Suggestions include forcing cyclists to take a driving test, while others call for bikes to have number plates. Admittedly, most of these proposals were made by drivers who have had bad bike run-ins. But, even the cyclists among us have to admit that this makes sense. That’s especially the case if such tests included safety rules and regulations. After all, as it stands, it’s down to us to do our own research about issues like these. Would you get in a car without an instructor teaching you how to stay safe? Of course you wouldn’t. If we could get cycle lessons from an official, we’d be in a much better position to keep ourselves safe. So, though cyclists may initially be opposed to ideas like these, it’s possible they could work well in the long run.

As it stands, the jury is out on whether changes like these will appear anytime soon. Opposition at every turn makes things complicated, and it doesn’t seem the government are worried about pushing the point anytime soon. That said, slowly but surely, the situation is improving. And, as pollution becomes more of a pressing issue, it’s hopeful that cycling will become the norm. Who knows, we could well find ourselves in a future where there are more bikes on the road than there are cars. If that happens, many of these worries would no longer be necessary.