America will see a rise in homeschooling and poorly educated youths

In this third and final part where UK school students respond to Trump, we examine America's 60 per cent homicide rate.

Man with his face painted with the flag of USA. Second Amendment expression concept.

What has this world come to? Starting from Donald Trump being elected, then the wall being built between Mexico and America and now teachers being trained to have guns. I’m going to give my perspective on this topic.

Let’s start off with why it is bad to be training teachers to use a gun. Firstly, let’s say a student brings in a ‘fake’ gun and pretends to shoot it, then the teacher will have to automatically shoot them because that’s what they have been trained to do. This can have a huge impact on the school’s environment leading to disruptive learning and anxiety within the school’s atmosphere. They say it could help prevent massacres, but will it help? In my eyes I believe that this won’t work. This may actually cause an increase in shooting episodes.

Let’s assume the majority of students in the US suddenly have a gun and one of them has an argument with their friend, what’s a possible automatic response to come from that? SHOOT! Is this something we really want to start? one small comment could be said, and a person’s life is gone! If we carry on like this, by the time we get to 2020 we could be in a world where there will be people shooting not out of necessity, but whim. As you can see in the image below, the US has the highest homicide rate, with 60 per cent of people being killed by guns. 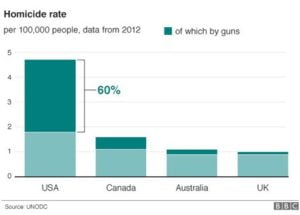 The more people there are with guns, the greater the likelihood of the above statistic rising. If America goes ahead with Trump’s plans, it could lead to a significant rise in homeschooling. Worried parents may feel too apprehensive of sending their child to a school where teachers carry guns, and where their son or daughter may become witness to frequent shootings. To protect their children from such long-term stress, parents may just want to homeschool instead. The consequences of this may include loneliness, antisocial behaviour and inconsistent learning, which could all affect the child’s future job prospects. Is this what President Trump had in mind? Parents spending their time teaching and an increase in unconfident, poorly educated young people.

However, I believe there is a solution that can create a much happier and safer environment for teachers, students, and families. Provide schools with metal detectors. This is cheaper and a much more efficient and reliable way to keep schools safe. If anybody brings a gun into school it will be identified and removed before it causes harm.

Of course, this solution is not without its flaws. Modern technology (phones, tablets, laptops etc.) will show up in metal detectors, which could slow down the queues to get into school and disrupt class hours. In fact, 73 per cent of US students have access to a phone, whether it’s in high school or college. Metal detectors can also be expensive as you would need to train staff and maintain them.

Still, if I was a student in America I would prefer having metal detectors to teachers with guns. It’s just something that will make me feel safer and so more likely to stay in school, because I will be less stressed. I also think that metal detectors would be received better by parents and the public as they look safer and more efficient.

Teachers should be role models to students, not soldiers in reserve. They should set a good example by educating them in the problems guns can cause and making them see that a loaded weapon is not the solution.

Why Brexit Is Pushing So Many UK Investors To Dubai

Oscars 2018 Fever: A triumph for the black acting minority? I don’t buy it

Oscars 2018 Fever: A triumph for the black acting minority? I don't buy it