Abortion Reform: Why is it so difficult to trust women to make the right choice?

Yesterday I went to the Northern Ireland protest march in Parliament Square — something I was first hesitant to attend due to my opinions on pro-life. I believe that any human’s life matters and should have a right to exist. However, I also think that abortion should be a choice that a woman makes for herself.

Maybe I am in the grey area of believing in pro-life and also supporting the choice of the individual, but this is why I decided to attend Tuesday’s protest to learn more.

Just like the recent reform in the Republic of Ireland, Northern Ireland is yet to make the same change to repeal the 1861 Offences Against the Person Act. But this will be hard given its large religious population and the many pro-life campaigners, such as the ‘Precious Life’ organization, that are concerned about a referendum on the issue. Their website even states that having an abortion in cases of rape will leave the woman worse off and that the baby’s life should not be subjected to punishment.

Pro-choice campaigners like Sophie Walker, leader of the Equality Party, insist however that this is not a moral issue but a health one. We have all heard of the high costs for women having to travel to parts of the UK and other countries just to get an abortion. These women are scared and sometimes don’t even tell their families that they are doing this for fear of the repercussions. 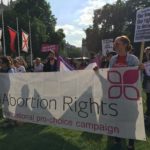 I for one feel that even the term ‘pro-life’ is a strange one. Imagine having a baby because pro-life campaigners influenced you. You end up with a child that you may resent — and that’s no ‘life’ at all.

Mara Clark who works for the Abortion Support Network (ASN), is fed up with women having to justify their case for change. In her speech she stated:

‘We are tired of being nice! We want choice, choice and more choice!’

Taking the example from the Republic of Ireland, Northern Irish women also deserve change. They want abortions to be free, safe and LEGAL! They don’t want to ask anymore, they are now DEMANDING for this simple right. After all, the ASN can’t help with babysitting an unwanted babies filling up orphanages. A trade union representative gave a small speech and stated how working-class women seem to be even more affected. As always, those from lower-income backgrounds will find it harder to access services. Flying to England and missing a day’s worth of pay, for them could mean the difference between eating or doing something they ought to have a right to. 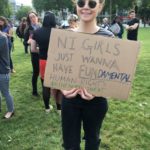 Recently, the news reported on a Northern Irish woman facing a criminal conviction because she gave her 15-year-old daughter abortion pills! Other shocking facts that I learned at the protest is that last year, 700 women made the trip to England to do what they felt was best for them.

Other harsh realities include the story of the four women who had to go to court for attempting to have an abortion with pills, being seen as criminals. And the police raiding the houses of pro-choice activists on International Women’s Day!

No wonder that Northern Irish women are taking no more of this religious dogmatism. They want change, and today’s campaigners make a valid point of saying:

‘It is not a referendum that’s needed BUT a legislative change’!

I will leave you with some protest rhymes, which I thought were pretty good:

‘I say pro, you say choice’

‘Not the Church, not the State, it’s a women’s own fate’

I am very glad I went today. Coming together and uniting is important to make change, and so I say to the women of Northern Ireland what the  activist from the Latin American Sisters of Solidarity stated: ‘we stand together with you’.

Improve, Don't Move: Fall Back In Love With Your Home

Hey there, my name is Shivani Govindia and I have recently graduated from the University of Bath in BSc Social Sciences. I am interested in social/political topics and attending events to provide feedback for others on what I have learnt.

Improve, Don't Move: Fall Back In Love With Your Home