In the two years since Britain made the fateful decision to leave the European Union, the UK’s political climate has been tumultuous; one day’s pretence at calm giving away to total anarchy the next. In recent days, Theresa May’s promise of a ‘strong and stable’ government has fragmented, with the resignations of David Davis, Steve Baker and Boris Johnson within the span of a matter of days leading many to forecast the downfall of Theresa May or Brexit as a whole.

In the wake of the headlines breaking in recent days, Shout Out UK decided to take action to discover how young people feel about the immediate future of the process of leaving the European Union. To determine the opinion of Shout Out UK’s audience, a poll was posted on Twitter questioning whether readers, and more importantly young people, felt confident in the Prime Minister’s ability to deliver an exit from the EU beneficial to the United Kingdom. 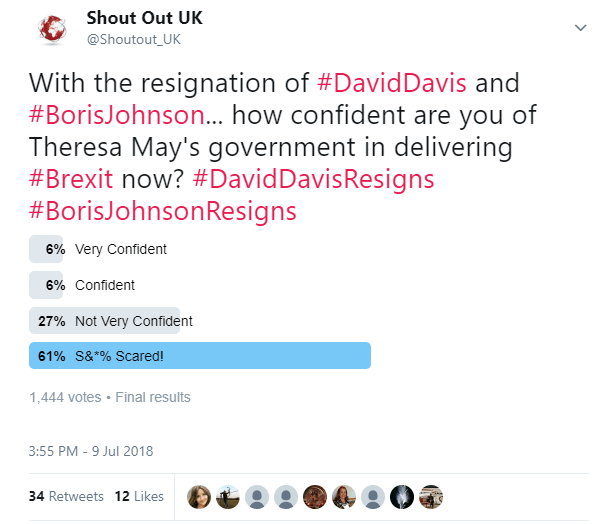 From almost 1,500 votes, 61 per cent responded that they were ‘S&*% Scared’, with a mere 12 per cent suggesting any sort of confidence at all. This encapsulates the opinions expressed elsewhere throughout social media — the vast majority of Britons feel that Parliament is on the brink of collapse; an opinion echoed by politicians on both sides of the spectrum. Jeremy Corbyn tweeted that Prime Minister Theresa May has: ‘no authority left’ and is ‘incapable of delivering Brexit’.

The departure of Boris Johnson, a major Brexiteer and political figure commonly associated with swaying the voting public in favour of leaving the EU, is likely to have major consequences as to the UK’s strategy in agreeing to a deal with the EU. Only 48 MPs are required to write to the 1922 Committee in order to trigger a vote of no confidence that could oust Ms May from her leadership role, sending the country into further turmoil and potentially bringing in a government with a completely divergent strategy. Many within government are adamant that this should not take place given that, a ‘plan is in action’ and further upheaval within government could be yet more detrimental to the political climate. Should a struggle for power ensue, the bureaucratic process would slow the government’s discussions regarding a beneficial exit from the European Union — wasting valuable time that simply cannot be afforded.

Mr Johnson’s departure signifies a decline in solidarity around how the government should approach Brexit negotiations, with prominent supporters of the Leave campaign jumping ship and further solidifying our political reality that is becoming more apparent everyday — that ‘The Brexit Dream’ is dead and in its place stands a soft, unbeneficial exit that is a Brexit in name only. The Chequers deal that Theresa May has discussed defeats the flawed purpose with which the UK voted to leave two years ago. It leaves us locked within the European Union with no say as to what happens within it.

The decision to hastily source Jeremy Hunt from his position as Health Secretary is likely to leave behind a swathe of problems for the NHS that his successor, Matt Hancock, may struggle to rectify. Social care is massively underfunded, with 1.4 million of those over 65 requiring basic assistance and not receiving it. As well as this, 100,000 NHS job positions lie unfilled and waiting times have skyrocketed. The chaos arising amid the Brexit crisis our government is currently experiencing serves to draw attention away from the fact that the NHS is beginning to collapse under intensive cuts; with promised funding nowhere to be seen.

Are The UK's Letting Agents Letting Down Consumers?

How Not To Pay Over The Odds When You Travel

How Not To Pay Over The Odds When You Travel