LGBTQ+ in crisis: Why trans exclusivists want transgender group out

We contacted the radical feminist group, Mayday 4 Women, to find out why they think 'transgenderism' is a threat to women.

Brought into the limelight by the ‘Get The L Out’ campaign, gender-critical radical feminists (commonly known as Trans Exclusionary Radical Feminists or TERFS) are so-called feminists who claim that trans women are ‘heterosexual men’ who are trying to ‘coerce’ or even ‘force’ lesbians to have sex with men. They support this overwhelmingly transphobic viewpoint by expressing concerns that ‘trans politics’ is ‘simply a new facet to rape culture and compulsory heterosexuality’. Recently they made headlines with a shallow attempt at hijacking this year’s London Pride march, despite being desperate to leave the community that it hosts.

Their campaign, succinctly titled ‘Get the L Out’, campaigns what they call ‘queer politics and transgenderism’. They describe the LGBTQ community as being responsible for the erasure of lesbians in society (which is an undeniable issue); furthermore, they claim that trans men are merely butch lesbians who feel societally pressured to identify as men — a statement that is simply unfounded in any form of fact. Harry Peers, a prominent non-binary activist and actor, said that he thought that:

‘allowing them to march and spread their hate message was a mistake that erased that safe space [that pride marches create], and left many trans people (especially kids) with the last impression that people within their own community think of them as rapists, liars and dangerous people — which is wholeheartedly not the case’.

We, at Shout Out UK, believe profoundly in the importance of exploring all sides of a debate before formulating a conclusion; in honour of this, we reached out to the prominent TERF group and self-described radical feminists, Mayday 4 Women. According to the group’s website, they fight for women’s liberation, and consider ‘transgenderism’ one of the biggest threats to feminism in the UK.

We contacted them via their well-established Facebook page, known for posting anti-trans propaganda, and they agreed to answer our questions — as long as we refrained from considering them ‘gender critical’, which they were adamant they were not (despite repeated references to the term on their website).

We sent a list of questions probing their belief system; however, the group clearly disliked our tone, launching into a series of rebukes, belittling my capabilities as a journalist and claiming that I ‘really need to learn how to do [my] so-called “journalism” job’, as well as declaring that they would be unable to answer the questions I had posed. Nonetheless, they promptly proceeded to respond to a number of the questions they had earlier refused to answer — once again stating that they were not gender critical, despite the term appearing a number of times on the Mayday 4 Women website and their opinions drastically aligning with the views shared by the gender critical movement (they also refused to deny this term, or explain their opinions). 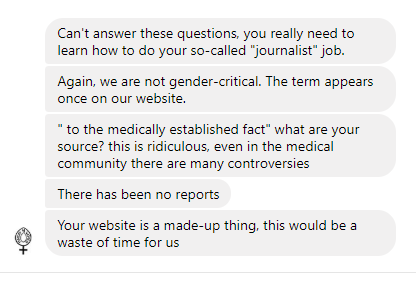 Following a couple of flawed attempts to disprove what my questions implied — including their claim that there is no medical evidence to support trans identities — before berating Shout Out UK as a whole, claiming that our website is a ‘made-up thing’ (although it seems pretty real to me), they finally and promptly blocked us, preventing any further discussion from taking place

A number of WLW have spoken out against these so called ‘feminists’, branding them as being counterproductive in the fight for equality. One of these, a bisexual teen, stated that they are ‘just as much of a woman’ and that ‘to leave them out is to not be fighting for equal rights, it is hypocritical’. Another expressed her opinion that we should ‘support a lesbian’s choice, and if they want to [engage in a relationship] with a trans woman, they should be able to’.

To conclude, the ideology that these so-called feminists preach is toxic, convoluted, and paints a detrimental image of the LGBTQ+ community. This is especially so when it comes to feminism as a movement, with many incorrectly deeming TERFS to speak for most feminists, and, more specifically lesbians.

The transgender community isn’t seeking to erase anyone’s identity — they simply seek recognition for their own; and the failure to accept them defeats the ideal of equality that true feminism seeks to achieve.

Finding Your Feet With Frugality In Seven Simple Steps

How Temporary Employees Can Help Grow Your Business

How Temporary Employees Can Help Grow Your Business