The almost forgotten story of the betrayal of the former French football captain who defected to the Nazi's during the Second World War.

Football, soccer match. A player shooting on goal performing a bicycle kick. Lights on the stadium at night.

On Boxing Day 1944, Alexandre Villaplane stood awaiting his impending death in front of a French firing squad for his part in betraying his country and siding with the Nazis during World War Two. Moments later, the man who was once the hero of not just the French nation, but the whole of the French Empire, would lie lifeless on the floor having been convicted of committing war crimes so horrific they almost defy belief.

Yet Villaplane wasn’t always viewed in this light. He was born in French Algiers in 1905 and was a true pioneer of the game, becoming the first player of African origin to represent France in 1926. A talented, tough-tackling midfielder, he made his debut for local side FC Sete where a series of increasingly impressive performances meant he got a move to Nimes before the ultimate honour for any professional footballer, their international debut, came against Belgium when Villaplane was just a few months shy of his 22nd birthday.

Villaplane’s career was only ever on an upward trajectory, culminating in 1930 at the World Cup in Mexico. In what he described as ‘the happiest day of my life’, the Algerian-born working-class lad, who had grown up in poverty, overcame all the odds and captained his French side at the inaugural World Cup in 1930. A 4-1 drubbing of Mexico would mark the pinnacle of Villaplane’s career. Men wanted to be him, women wanted to be with him. He was truly a national icon. 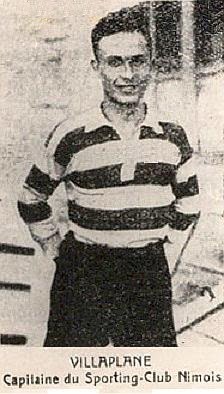 However, it would all quickly start to unravel almost as soon as the plane landed in Paris. His attention began to drift away from football and his new-found fame (and more importantly for Villaplane, fortune) meant he was often found out late in bars and clubs in Paris, whilst also visiting the horse-racing where he began to interact with the Parisian underworld. Once professionalisation came to all French clubs in 1932, a small team named Antibes offered Villaplane a lucrative deal, in an attempt to reach the summit of French football for the first time. Villaplane saw it as a chance to make even more money and in the game that would have seen Antibes crowned champions of all of France, their manager was sacked in a match-fixing scandal. Villaplane was strongly rumoured to be the figurehead of this, yet was able to use his boss as a scapegoat.

Villaplane would go onto play for Nice, where his poor attitude meant he was consistently fined for missing training and lacklustre performances — when he rarely did mange to make an appearance. He was soon released. Around this time, he became increasingly interested in the underworld and saw it as the main way to increase his material wealth. He did however try once more to return to football, in the second tier playing for Bastidienne de Bordeaux, but his attitude problem persisted and he left the game for good. The next time he would hit the headlines would be in 1935, the same year he retired, for fixing horse races in both Paris and the Cote d’Azur. But far worse was to come from Villaplane.

In June 1940, the Nazi’s conquered much of Western Europe and this culminated with the invasion of France, putting it under Nazi control. For criminals, such as Villaplane, it simply represented a chance for a bigger payday. By the time of the Nazi occupation, Villaplane was an expert in underground dishonest business dealings, often with the local Jewish population. He was arrested in 1940 for two months, for possession of stolen goods, and this was where his first contacts were made which would eventually make him part of Hitler’s regime.

Whilst inside, Villaplane was approached by members of the French Carlingue, or French Gestapo as they are more commonly known. By 1944 he was the chauffeur to the head of the Carlingue, Pierre Bonny, until he was offered a lucrative promotion to head one of the five sections of the North African brigade. This was to be made up of Nazi sympathising North African immigrants who would hunt down resistance groups. Villaplane was given the rank of SS-Untersturmfuhrer and was given the full Nazi uniform.

He wore it with pride and would go on to order the massacre of 52 people at Oradour-sur-Glane. Not only did he order the massacre, but he pulled the trigger himself, killing up to 10 people, the youngest of which was 16. The war brought the true side of the former French captain to the fore. He was a psychopathic sadist who stopped at nothing to enhance his personal gain. In Phillippe Aziz’s book about the Bonny-led gang, Villaplane is reported to have laughed after machine gunning two peasants from close range. The prosecutor at Villaplane’s trial would say:

‘They left fire and ruin in their wake. A witness told us how he saw with his own eyes these mercenaries take jewels from the still-twitching and bloodstained bodies of their victims. Villaplane was in the midst of all this, calm and smiling. Cheerful, almost invigorated’.

Yet Villaplane’s craving for personal wealth had no end. As the allies closed in on Paris in August 1944, Villaplane realised his fate if he were to be caught. He began to categorically free the prisoners he caught, not because he felt guilty but because he thought it would save his own back. He would say:

The sheer depths of his depravities came to the fore. There is nothing worse than putting a price on human life, yet Villaplane was willing to commit this crime to fill his pockets.

He was arrested on the 1st of December 1944 and was said to have laughed during his trial until the point where the death sentence was given. He was executed by firing squad on Boxing Day that same year.

Once France’s national hero now a national traitor, Villaplane is a symbol of how money can corrupt and how war can truly bring the worst out of people. A sadist and a murderer, Villaplane’s talent on the field has been overshadowed by his heinous actions off it and his fate in history as a traitor has long been sealed. Villaplane is truly football’s ultimate villain.

Trump may be trouble, but Xi Jinping is the real threat to democracy

Trump may be trouble, but Xi Jinping is the real threat to democracy