Politics and Art: A necessary union for young people

Art is an expressive tool and when combined with politcs, a formidable voice.

There is space and a need for a creative practise when discussing politics.

Historically, art and creative practise have often been used as a forum for political discussion, but there is space and a need for combining the two more explicitly now more than ever.

For some UK residents, the word ‘politics’ evokes images of Westminster as perhaps an archaic and outdated and confusing system, ideologically democratic, but realistically left in the hands of the well-educated, political elite. Of course every UK citizen is entitled and encouraged to vote for their MPs, but the majority of political discussion is left to the 650 MPs in the House of Commons. To question what democracy means, and how much of your voice is heard within the UK system is perhaps inevitable, and it is easy to get turned off by the word ‘politics’ for this very reason.

With a capital P, this word can evoke a seriousness reserved for the well-informed and opinionated. This has only been exasperated over the last two years with political apathy and fatigue caused by Brexit, whereby a whole new language of ‘Norway agreement’, ‘Irish Backstop’, ‘hard and soft Brexit’ terminologies have been created and are now needed before understanding the basics. Politics through mainstream media and mainstream discussion is not everyone’s language, and now more than ever, there is space and a need for finding inclusive, creative ways to engage in politics to prevent this fatigue.

Over the past three months, young people from Huntly, north-east Scotland have been embracing this concept, having their say on democracy, politics, and the media in a project called People’s Act with arts organisation Deveron Projects. Through discussion and creative workshops, the young people involved have been responding to issues which matter to them: living in Huntly as a young person; reliance on social media and the hypocrisy of adults; informed consent and ethics of the media; mental health; gender politics; climate change; maintaining and cultivating relationships with Europe; as well as Brexit and escapism from these political issues. 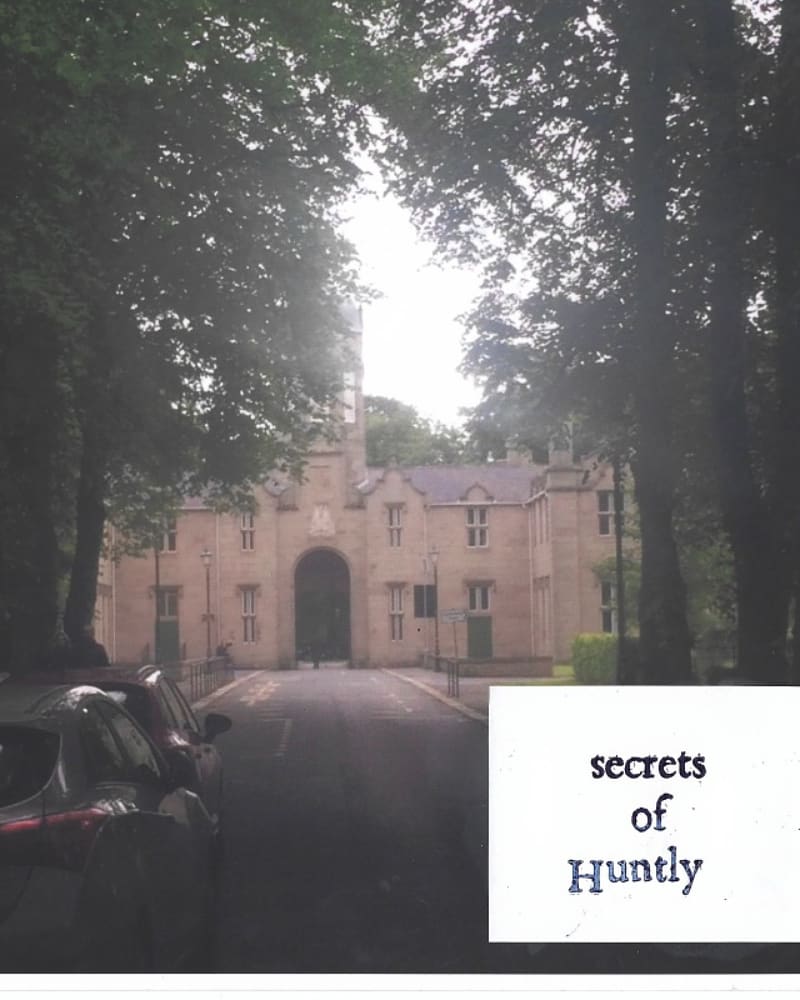 Following these discussions, ideas and opinions were communicated through a range of creative methods: poetry, photography; video and collage which were chosen as mediums by students to express their opinions on Brexit, Scottish independence, local issues and gender politics. Two students even exercised their democratic rights creatively by leading bike tours of the town. Tour guides Amelie and John led locals through locations in Huntly showing a different perspective on where they live. Picture a Palace — a tour commenting on the lack of a cinema in Huntly, and where might be an ideal location to build one. Secrets of Huntly — a take on the mystery tour, offering locals a secret, underground, and young person’s perspective on the town they are living in. Both students used performance, storytelling and historical research to comment on their current living situation as young people in a small town, and share this perspective with their neighbours.

Art student Megan Anderson invited school pupils to express their views on the current Brexit situation through a large sheet of cardboard, which was placed in the school where pupils were able to share their thoughts anonymously. Views ranged from ‘I don’t know anything about it’, ‘stupid idea’, ‘worst thing ever’, an ‘economic disaster’ and ‘Brexit is boring’ to:

‘the most catastrophic political event in living memory. [Brexit] has exposed, fatally, the flaws in the UK parliamentary system. Has allowed racism and bigotry to be expressed openly with little fear of challenge.’ 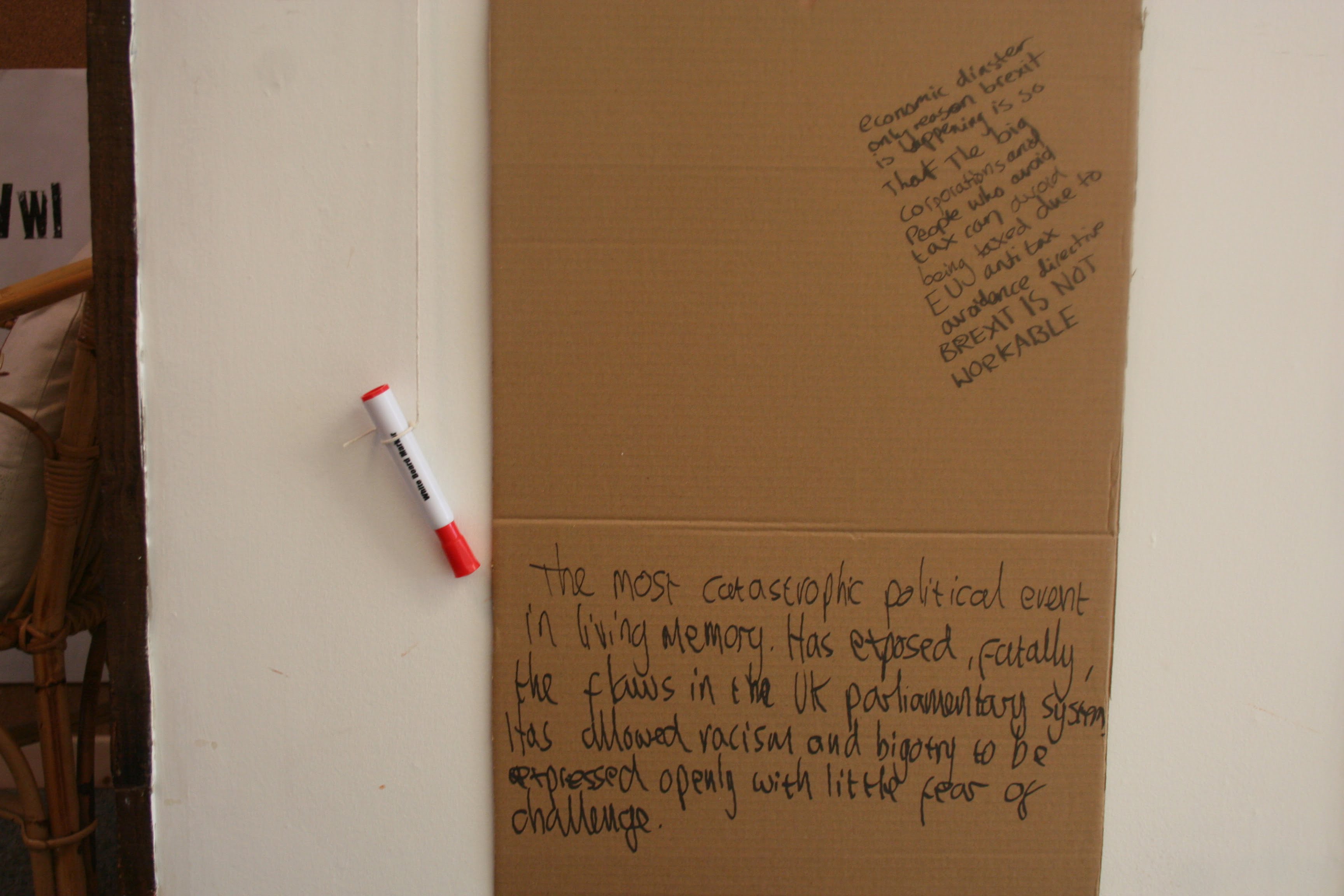 ‘The only reason Brexit is happening is so that the big corporations and people who avoid tax can avoid being taxed due to the EU anti-tax avoidance directive. BREXIT IS NOT WORKABLE’, wrote one person. This informal and anonymous setting allowed for a wide scope of thoughts and opinions to be shared and discussed with one another, whilst being positioned very publicly and being very visible to other students. The use of cardboard, a material usually considered impermanent and recyclable, perhaps alleviated pressure and encouraged spontaneity in responses.

Brexit was discussed by another student, Leo, through humour and fiction, taking inspiration from artist Cold War Steve by using photoshop to create satirical images, as well as writing an apocalyptic zombie script titled ‘David Cameron vs Zombies’. This student chose to make sense and communicate Brexit’s nonsense by exaggerating and drawing parallels between the current political climate and a fictional apocalyptic world with civil war and zombies, using humour as a way to approach and soften these themes. 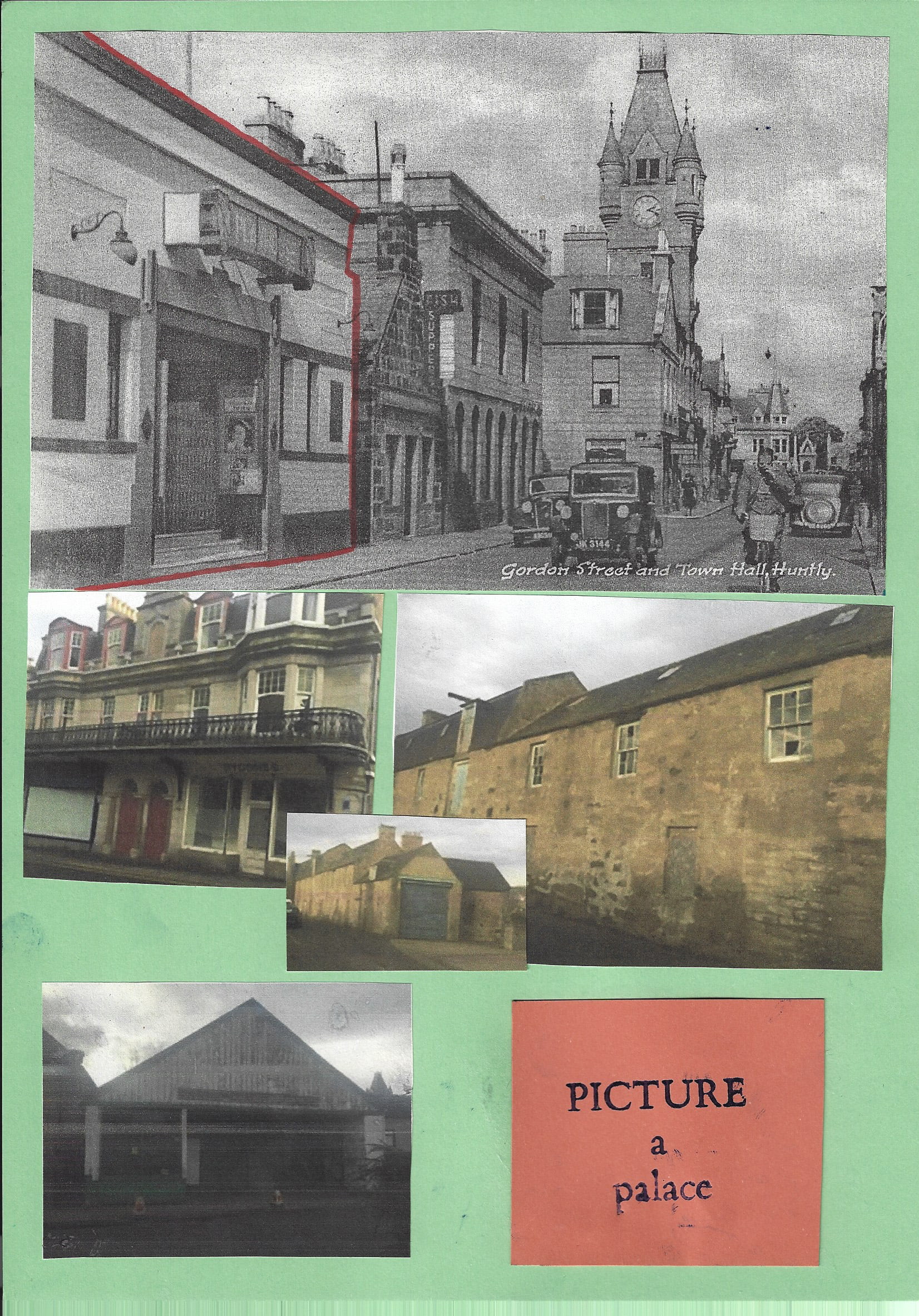 Works produced during the project were shown in an exhibition, co-curated by art student, Megan Anderson, whereby the general public were invited to view these perspectives on important issues. By communicating these ideas through alternative methods to mainstream media, these young creative practitioners offered their audience an inclusive ‘way in’ to engage with local and national politics, as well as perspectives perhaps restricted by methods of communication more formally used to discuss politics, such as verbal debates and non-fictional writing.

To be engaged with political issues should be encouraged, and the production and consumption of creative political content alongside mainstream media is one way of providing this encouragement and inclusivity.

As an extension of this project, People’s Act, from May 1st From Either Side of the Fence uses cycling and Mail Art to explore the political landscape of the UK. Lauren will be be cycling from northern Scotland to southern England collecting postcard responses on English and Scottish national identities and Scottish independence. Follow the journey and have your say on these themes here.

The Most Common Challenges In Business (And Their Solutions)

Could a greener future be what Australian voters want?

Could a greener future be what Australian voters want?