The Amazon is burning, but why did it take us so long to notice?

Four months after Notre Dame, another fire should be dominating the headlines.

The Amazon is on fire. For the last three weeks, the world’s largest rainforest has been burning with such ferocity that Amazonas has declared a state of emergency and its capital Manaus has been on environmental alert since Friday the 16th of August.

Satellite images show Brazil’s most northern state — Roraima — covered in black smoke, while some meteorologists have also suggested that the billowing clouds of smoke may have contributed to the blackout face by the Brazilian city of San Paulo, 1700 miles away. San Paulo’s blackout, combined with unsubstantiated (and later denied) claims by Brazilian president Jair Bolsonaro that non-governmental organisations (NGOs) were responsible for the fires, has attracted huge media attention — some three weeks too late.

Since the start of 2019, Brazil’s space research centre IPNE has recorded 72,000 fires in the Amazon rainforest — an 83 per cent rise compared to the same period in 2018 — and 9,500 since Thursday the 15th. The Amazon is not infamous for wildfires, but they are more common during the dry season. The climate crisis has meant the dry season is dryer and longer, creating ideal conditions for the creation and spread of fires. But according to meteorologists and the head of the WWF Amazon Fund, the fires themselves have been started intentionally by human activity.

For loggers and farmers, these illegal fires are an aggressive means of deforestation to create space for cattle. Bolsonaro has been blamed by conservationists for encouraging heightened deforestation. Since he took office in January, convictions for environmental crimes have fallen and deforestation has been carried out at an accelerated rate. The Amazon is home to around thirty million people — 2.7 million of whom are indigenous — and three million species of plants and animals. As one of the largest carbon stores in the world, it is a crucial tool in the fight against global warming. It is becoming increasingly apparent that Bolsonaro favours short-term development over long-term conservation and survival. 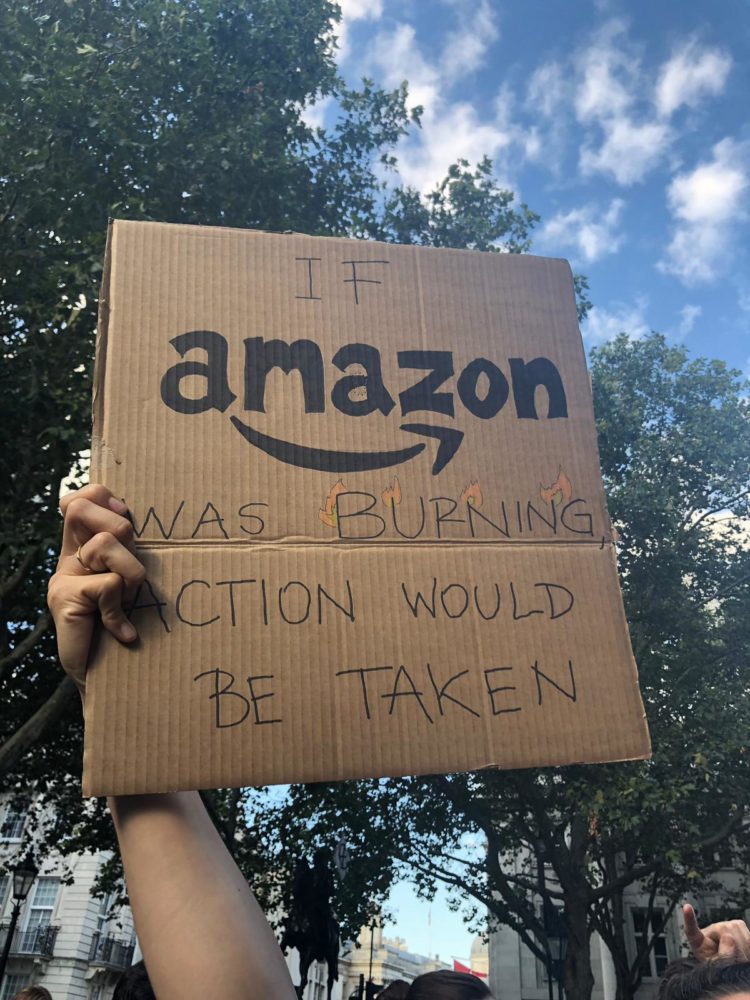 It is always easier to blame one individual. Bolsonaro is a far-right, populist politician described by The Economist as a ‘right-wing demagogue’ and ‘apologist of dictators’ — not someone easily convinced of the long-term, devastating impact of cutting down trees. But we have all heard the statistics of ‘X’ number of football pitches disappearing from the Amazon rainforest. We have all seen Iceland’s banned advert depicting the plight of an orang-utan during palm-oil-driven deforestation. And yet until just recently, the Amazon and its inhabitants have been facing raging infernos with minimal news or social media coverage.

The Notre Dame fire in April received wall-to-wall coverage on twitter and led the headlines on almost every news outlet. Huge donations poured in from all corners of the globe — although the long-term impact of these donations is questionable — and Instagram was transformed into a gallery honouring the historic cathedral. And while it is unnecessary and cruel to criticise people for their often genuine sadness at the demise of such a symbolic and important building, it is crucial to note that this outpouring of money has been lacking when it comes to the unfolding events in the Amazon.

Given the comparative accessibility, proximity and commercialisation of the Notre Dame as opposed to the Amazon, perhaps we shouldn’t be surprised that the former received such publicity so quickly while the latter has required a controversial political figure to make a controversial political statement to garner the same attention. The Amazon is so large it defies comprehension, and so becomes conceptual, theoretical and mythical.

But the Amazon is none of these things. It is a home to communities, a sanctuary for wildlife and one of our most crucial resources in the flight against the climate crisis. It is a living, breathing ecosystem. Animals, plants, and possibly humans have died and will continue to die in these fires; they are not bricks and mortar that can be rebuilt if the right billionaire donates the right amount of money.

More political pressure needs to be placed on Bolsonaro and other leaders responsible for the welfare of the Amazon, while more support must be given to those who are dedicating their lives to protecting it.

To support those protecting the Amazon rainforest, go to:

Why the term 'ecocide' should become legal

Why the term 'ecocide' should become legal