Manchester protests are not about Brexit, but fair play

We are being gaslit by our Government. The North has seen this before.

Manchester left a clear message last weekend: we won’t be fooled by this Government.

Two hundred years on from the Peterloo Massacre, the spirit of protest and rebellion continues to thrive in the centre of Manchester. Last weekend, Extinction Rebellion occupied the city’s main shopping street for four days while less than three hundred yards away, a Stop The Coup protest gathered outside the town hall. Chants filled the streets rather than the football terraces, while placards ranging from ‘plants and people equal power’ to ‘BJ sucks’ bobbed defiantly in the drizzle.

The two protests continued a long and proud tradition in the city. A glorious clash of community spirit and individuality, Manchester is widely viewed as the capital of the North — although Scousers might disagree. But while government after government has promised the fabled ‘Northern Powerhouse’, Manchester and the rest of the North have grown accustomed to being left behind.

The cliched Northerner stereotype, with a chip on their shoulder, a flat cap on their head and a disproportionate grudge against the success of their southern counterparts, is as inaccurate today as it was when those protesters congregated at St. Peter’s Field two centuries ago. But while many Mancunians are simultaneously proud of their magnificent heritage and tired of lazy labels, a lingering feeling of resentment towards London remains — and importantly, remains justified. 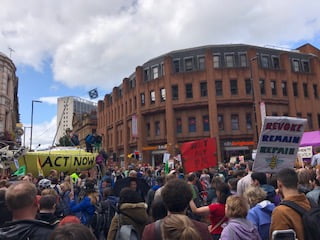 There continues to be a marked north-south divide which is not taken seriously by the Government. Of the current cabinet, only four ministers represent constituencies in northern England, compared to thirteen representing southern constituencies. Only 11 per cent of Conservative party members hail from the North: in comparison, a third reside in London and the South East. Secondary schools in the North consistently underperform their southern counterparts; more children in the North receive free school meals; the North regularly faces lower public spending — and greater cuts in that spending; life expectancy in the North is consistently lower than in the South; wages in the North tend to be lower; and transport anywhere outside London is notoriously flaky.

Critics of Manchester’s Stop The Coup protests — and indeed of similar protests across the nation — argue that they are simply a last-ditch attempt by Remainers to revoke the result of a referendum won by Leave nationally and specifically in the North. It would be foolish to argue that this isn’t the case for some protestors — although to suggest that we have to stick to a decision made three years ago when we have had three prime ministers in as many years seems a bizarre case to make. It appears that the Conservative Party is able to change its mind, but not the rest of the country.

Hopefully, it is not too controversial to suggest that the 2017 election can be read as an election on the terms of Brexit. Around 60 per cent of northern voters and 75 per cent of northern constituencies voted for parties that either fiercely advocated Remain — the Liberal Democrats — or rejected No Deal — Labour. But this result, a democratic vote by the people more recent than the referendum, has been ignored by a government who has suggested it might be willing to break the law to get Brexit through. 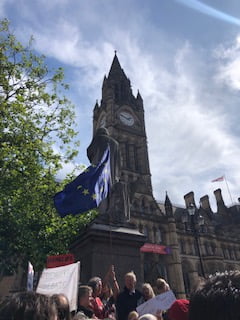 If 60 per cent of Northerners rejected a Conservative No-Deal Brexit, and 99.9 per cent of them had no say in the election of Boris Johnson as prime minister, accusing those at the Stop the Coup protests of being anti-democratic is objectively ludicrous. But as a nation, ludicrous accusations and actions are something we are becoming accustomed to.

The dictionary definition of gaslighting is ‘the process of causing someone to doubt their own thoughts, beliefs and perceptions’. The current Government is trying to gaslight an entire nation. Sajid Javid has deleted one of his tweets denouncing the suspension of Parliament; Boris Johnson has misleadingly suggested that the proroguing of Parliament in the run-up to one of the most important events in recent history is ‘normal’; Nigel Evans has falsely stated the nation voted for No Deal. All these actions have created an environment where the public is unsure of what is and isn’t true and where a cabinet minister is able to suggest Government might ignore the rule of law and receive minimal backlash.

Two hundred years ago, the North grew tired of being gaslit by the Government. The Peterloo Massacre demonstrated their desire to be represented, to be told the truth, to understand and be understood. Mancunians took a stand against a government prioritising its own survival over the national interest. The North has seen this before — and the rest of the nation would do well to listen.

9 Travel Hacks That Will Change Your Next Trip

An expat in Lebanon: Why I keep returning to this place

An expat in Lebanon: Why I keep returning to this place