Their slogan, 'Queers Anywhere are Responsible for Queers Everywhere', is about changing the lives of millions of LGBTQ+ people all around the world.

Voices 4 London is a peaceful direct-action group fighting for LGBTQI+ liberation. They are associated with Voices 4 and Voices 4 Berlin and here’s why the matter.

Since setting up in 2019, they’ve already started meetings for queer people and gained allies to make posters, banners and gather ideas for what event they should partake in next.

Their slogan, ‘Queers Anywhere are Responsible for Queers Everywhere’, shows how they care about changing the lives of millions of LGBTQ+ people all around the world. 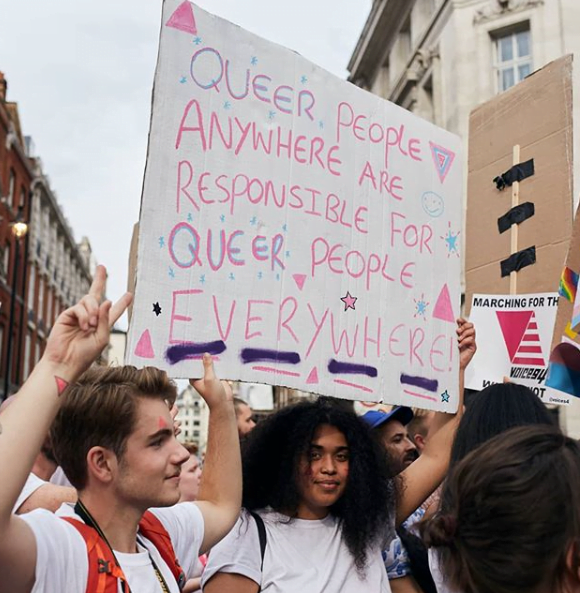 Many in the UK are uneasy about the new PM, Boris Johnson. Ellen Jones from Voices 4 wrote the following when sharing photos from the Kiss-in and Vigil:

‘Our current Prime Minister is known to be homophobic, sexist, racist and yet still he leads this country, still he grows and grows in power whilst more and more people are threatened by his governance and the rule of the Conservative Party … . But the rise in anti-LGBTQ+ rhetoric is far from new and far from being specific to this country. Across the world right now LGBTQ+ are facing persecution from both their own governments as well as from individuals and organised groups’.

Additionally, on September 14th, 2019, Voices 4 London attended the first ever Trans Pride in London. It is noted that the significance of a trans Pride parade in the current climate is because, as said by Munroe Bergdorf: ‘Being a trans person in the UK at the moment is like being a second-class citizen’. Voices 4 London are making LGBTQI+ history in the UK right now! 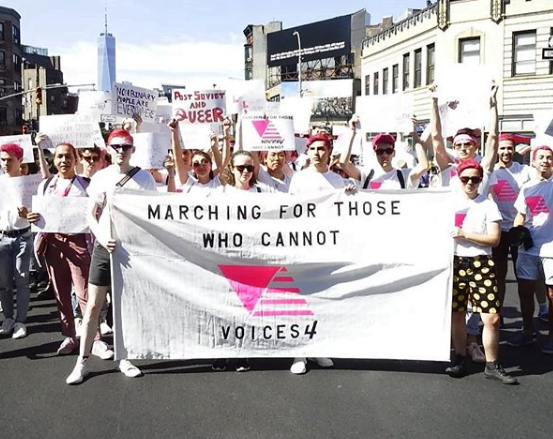 Many would argue that queerphobia is no longer ripe in 21st-century Britain, but the evidence says otherwise.  Research conducted by The Guardian says that, ‘homophobic and transphobic hate crimes, including stalking, harassment and violent assault, have more than doubled in England and Wales over five years’. The Guardian’s findings came after two queer women were attacked whilst on a bus in London because they refused to kiss for the pleasure of a group of men. Not long after, Southampton theatre were forced to cancel shows after their LGBT+ actors were attacked. 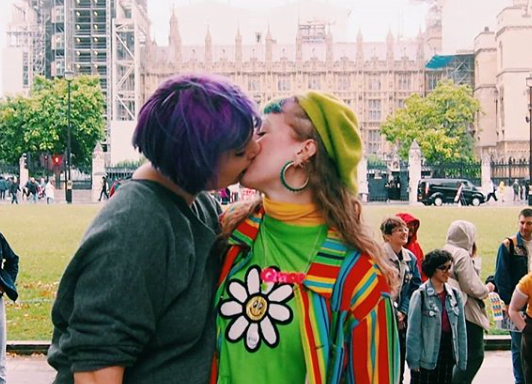 The unique point of Voices 4, arguably, is their justified anger. An anger that is very representative of 2019 — when the world is as confusing as ever, but basic morality and the decency to treat LGBTQI+ people respectfully should be simple enough to understand.

I can see Sylvia Rivera, Marsha P. Johnson and all the queers who fought when Stonewall first began in the people behind Voices 4 London today.

We shouldn’t have to still be fighting, but I’m glad to see people so young taking a stand against the mistreatment of LGBTQI+ people. They will not back down and they aren’t going anywhere!

3 Things To Consider Before Buying A Used Car

How To Study With Less Effort And Achieve The Best Results

Emily Bourne is an artist, writer and activist from London. She enjoys making weird and wonderful things, is always writing and tries her best to highlight issues is the world right now. She is a freelance writer, usually focusing on topics she’s passionate about like LGBTQI+ rights, ableism and elevating the voices of marginalised communities. You can see more of her work on Instagram, @floteren.

How To Study With Less Effort And Achieve The Best Results