12 Fun Ways To Stay In Shape

Everyone knows the importance of getting the heartbeat up and staying in shape. Alas, this is rarely as easy as we’d like it to be. The first issue is that we’re all so busy, and when we’ve finally finished doing what needs to be done, we often don’t want to spend time at the gym. The second issue is that the gym can be, well, a little boring. As such, if you’re going to stay in shape, then it’s recommended that you find an activity that you genuinely enjoy, something that’s fun. You’ll be pushing yourself towards a healthy lifestyle, and it won’t feel like some annoying chore; you’ll have fun as you do it.

Below, we take a look at some recommended activities to take up, as well as tips that will make the activities more fun.

Our first bit of advice isn’t related to any single activity, but rather who you do your activities with. It’s so much easier to develop an active lifestyle if you have a group of friends with whom you do the activity. Even the activities that you would ordinarily consider to be boring can become entertaining if you’re doing it with the right people! If your current group of friends isn’t as active (or as fun …) as you’d like, then take a look at some local groups, like those listed on Meetup.com.

Downhill skiing gets most of the plaudits, but it’s actually another version of skiing that you should take a look at. Cross-country skiing is a phenomenally good workout; indeed, your body is unlikely to have been as sore as it will be after you’ve engaged in a few hours of cross-country skiing. The beautiful thing about this activity is that you’ll be having a good time while you’re actively doing it. What’s not to love about spending a few hours passing through a calm forest landscape?

There are plenty of benefits to putting on some hiking boots, and going for a long walk. You’ll be surrounded by nature, which has been shown to lower anxiety and boost your mood, and you’ll also have the space and environment to let your mind wander. If you’re ever wrestling with an issue, a long walk can be just the thing that unlocks the answer. So it’s good if you’re on your own, but also if you’re with others. Indeed, something magical seems to happen when a group of friends is walking in the outdoors: interesting conversations and good times just seem to roll.

Par for the Course

Of course, sometimes it’s just not feasible to go for a hike every weekend. Most people don’t have all that many walking paths close by to them, or sometimes the landscape just isn’t that interesting. Fortunately, there’s another option for people that like to walk: golf! The object of the activity is, of course, to get a ball into eighteen holes with as few shots as possible, but you’ll also engage in a lot of walking during the round, too. The average golfer walks around 3.5 miles in their golf shoes every time they play! So if you’re looking for an activity that gets you walking without even realising it, look at picking up some clubs.

Out on the Water

We call our home planet Earth, but it should really be called water. After all, around 70 per cent of our planet’s surface is covered in liquid! And it’s not just there as a fancy backdrop to land on terra firma, either — it can also provide a lot of fun. There are any number of exciting activities that you can enjoy on the water. How about kayaking, for instance? This is a tremendously fun way to spend an afternoon, and you’ll get your arms fit, too. Or you could think about taking up surfing: it’s not very often that you see an out of shape surfer, after all. If you’re more into the classics, then take a look at swimming — many people that make it part of their lifestyle typically talk about how euphoric swimming can be once you enter ‘the zone’.

Learn How to Dance

There’s much to love about humans. We’re kind, we’re considerate, and perhaps best of all, we like to move and have fun. There’s nothing better than seeing a sea of people dancing the night away. While it’s fine if you just want to shake your body after you’ve had a few drinks, you can also look at becoming a little more serious about dance. It’s a terrific workout! Indeed, after an hour of dance class, you’ll be positively exhausted; but you’ll have had a lot of fun during the process. Take a look at what classes are offered in your local region, and try it out. The other benefit of learning how to dance properly is that you’ll look pretty terrific on the dancefloor, too. 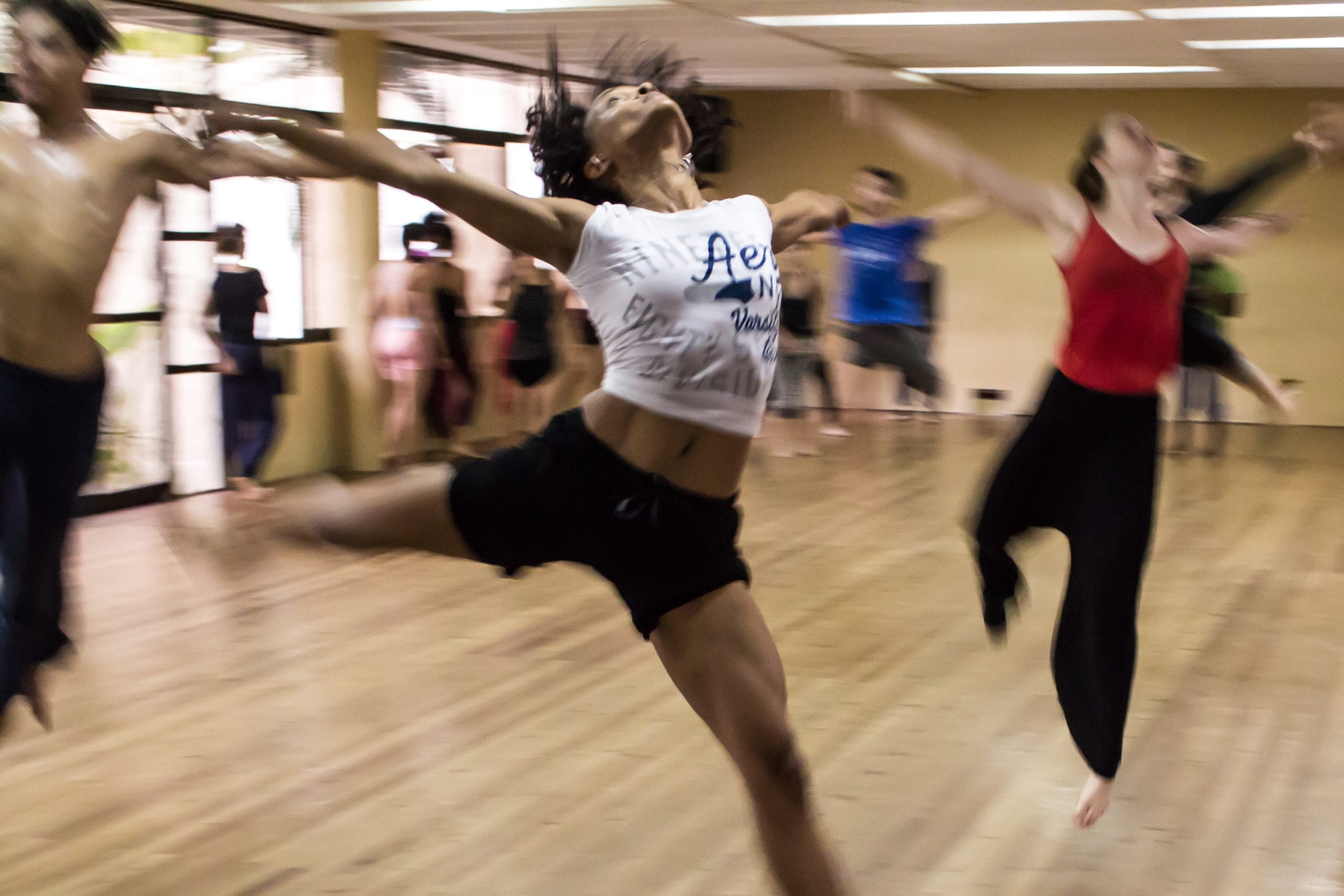 Photo by Michael Zittel from Pexels

There’s much to love about strapping on some running shoes and going for a jog. But it’s true that you have to be one of those motivated people to get up off the couch and go every single day. As such, one way to make running more fun is to do it as part of a longer race. If you’ve ever been to see a marathon before, then you’ll know just what kind of awesome carnival experience it can be. Instead of standing on the sides, why not look at taking part yourself? There’s something pretty special about challenging yourself, along with thousands of other people. Plus, they do say that if you want to make exercise a regular part of your routine, then you should have targets. And what’s a better target than trying to get your personal best time in a marathon (or half marathon)?

Remember when you were younger, and you would spend all your days just running around and having fun? Alas, it’s not as if you get to do that anymore: there are just too many responsibilities to take care of. But just because you can’t spend all day in play mode, that doesn’t mean that you shouldn’t play at all. If you have children, then one of the best ways to stay active is to embrace playtime with them. If you don’t have kids, then no-one says you can’t play in other ways — trampoline parks, for example, may be marketed towards the youth of society, but they’re a lot of fun if you’re an adult too. Grab some pals, and head down for a few hours of bouncy fun — it provides a pretty terrific workout.

The best way to stay fit and healthy is to make it a regular part of your lifestyle. And that can be a challenge, especially if it’s just you trying to do it. If you have other people relying on you, then you’ll be there, always. As such, why not look at joining a sports team? If you’re a cricket, football, or rugby fan, then there’ll be plenty of local teams that you can join. You won’t just be engaging in an activity and working up a sweat: you’ll also make friends, and have plenty of fun and laughs along the way.

There’s much fun to be had on two wheels! One of the reasons why society is unhealthy is because we have such a sedentary lifestyle. We sit much more than we should. You can get around this by ditching the car for a bicycle and cycling to work. On the weekends, you can have a lot of fun exploring new places by going on long bike rides. You’ll be able to discover areas that were previously off limits.

Looking to build core strength, and have fun at the same time? Then look at taking up rock climbing. It can be super fun and even feels somewhat primal, too.

They say that technology is less fit than we should be, but that, of course, is nonsense. Technology is just a tool, and what matters is how you use that tool. While your fitness will suffer if you’re just scrolling through Facebook and watching Netflix, there are ways to use tech to get fit and healthy. For example, what about Wii games? You’ll be able to work up a sweat and have all the fun of a video game, right in the comfort of your own home. Indeed, there aren’t too many things more fun than spending a few hours doing battle on the Wii with your friends and family!

Hopefully in this list, you’ll have found something that peaks your interest! We tend to think that exercise has to be boring, but as this blog post has shown, that’s just not the case. If you’re beginning to feel bored when you visit the gym, then take up one or more of the above. You’ll be enjoying your active lifestyle in no time!

Photo by Headshatter from Pexels

New Car Versus Used Car: Which Is The Best Buy With A Bad Credit Rating?

New Car Versus Used Car: Which Is The Best Buy With A Bad Credit Rating?