If London is two things, it’s diverse and full of young people. So why are 1 in 3 young Londoners and a disproportionate percentage of ethnic minorities and private renters not registered to vote? If you love London as much as Shout Out UK does, you’ll want to have your say, so make sure you’re registered to vote this London Voter Registration Week. 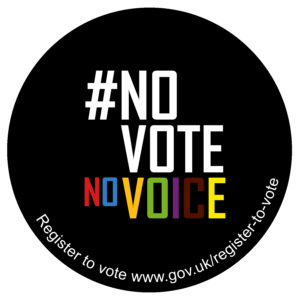 London is one of the UK’s most diverse cities. Yet only 83 per cent of Londoners from a Black ethnic background are registered, compared to 94 per cent of eligible White British Londoners. Commonwealth and EU Londoners are also under-registered, despite having voting rights in the UK, just like citizens of Old Blighty! Commonwealth citizens can vote in all elections, and EU citizens can vote in local elections, but not all of these Londoners are taking advantage of this right.

London is also packed with under-25s, but despite being alleged tech-natives, 1 in 3 of them haven’t made the simple journey to gov.uk/register-to-vote and entered their details. If you have time to look at cat memes, you have time to do this.

London is also famed for social and private renting, but voter registration rates for these renters sit at 85 per cent and 86 per cent respectively — including many young people. Meanwhile, 93 per cent of home owner-occupiers are on the electoral roll.

But why should we care?

Put simply: #NoVoteNoVoice. If you are not registered to vote, you don’t get to take advantage of our collective right to decide how our city and country looks.

Given that the groups hit hardest by the pandemic are some of those least likely to be registered to vote in London, it’s vital that everyone takes this opportunity to get their voices heard so we can shape our city and country’s future.

That’s why the Greater London Authority has launched this campaign, which is delivered by Shout Out UK, with the support of a host of other statutory bodies, including the Electoral Commission, and diverse civil society organisations from across London.

‘I created Shout Out UK when I was 22-years old with the aim of ensuring that everyone knows how our political system works, through political literacy, and then engages with that system. As a Londoner, the pride I have in my city is in the diverse voices we have. So we at Shout Out UK couldn’t be more excited to be the delivery partner for the Greater London Authority’s London Voter Registration Week 2020 and support them in ensuring every voice that makes this city great is registered and represented’.

By raising awareness for the second year running, the campaign will seek to tackle voter registration inequality in the capital, making ours a healthier democracy.

‘Every young person — no matter who they are or what their background — can make a positive difference in their communities. And one of the most effective ways to do this is to vote in elections. That’s why Young Citizens stands four-square behind this London voter registration drive’.

But why register NOW?

Registering to vote isn’t just for elections. Borough electoral services are currently sending out letters and emails as part of their annual voter registration canvass, and being on the electoral roll brings numerous other benefits.

Juries are randomly selected from people on the electoral roll. With young people, renters and ethnic minorities under-registered, they will also be under-represented in court.

‘Registering to vote is so simple, yet so powerful. I hope we can dispel the myths suggesting it’s a long, drawn out process. If people aren’t excited by it, then at the very least it should be seen as something as trivial yet as vital as doing the shopping’.

Ways you can help

We’re doing our bit with a social media campaign supported by a broad coalition of civil society organisations from across the capital. But we need your help too.  You could …

‘I believe participation in the voting process is a fundamental part of our democracy and should be respected and valued. Recent years have demonstrated the need for young people to understand the importance and power of using their vote, in order that they start to have a recognised voice. Importantly, it is something that helps shape their futures’.

To find out more about LVRW 2020 and access all the resources produced for this project — diverse infographics, posters, memes, animations, a video and the Political Literacy resources created by Shout Out UK for educators — please visit the LVRW Hub at registertovote.london. And remember, London won’t be the same without your voice — #NoVoteNoVoice , so #RegisterToVote now!

Why Dedicated Proxies Should Be On Your Proxy List